The Congress seems confident of winning the trust vote with the support of 107 MLAs in the 200 member assembly. The BJP has 72 members. 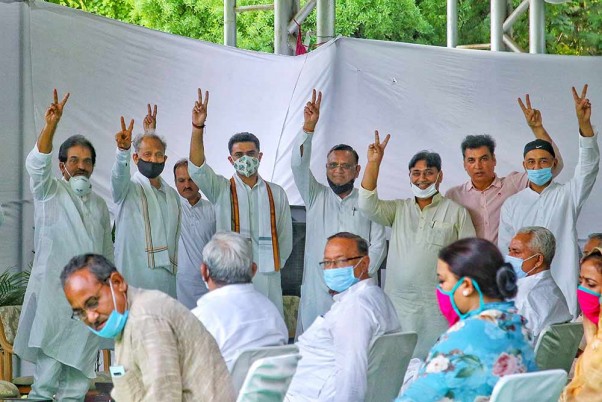 After Rajasthan Chief Minister Ashok Gehlot and his former deputy Sachin Pilot's patch-up, the Congress government in the state is now a battle away from putting to rest the entire political crisis in the state.

A key session of the Rajasthan assembly in which the Ashok Gehlot-led Congress government moved a vote of confidence began Friday.

The House assembled at 11 am and paid tributes to former MP Governor Lalji Tandon and former Chhattisgarh chief minister Ajit Jogi and other leaders who recently passed away.

After the obituary reference, the Speaker adjourned the House till 1 pm. After it resumed, the Parliamentary Affairs minister Shanti Dhariwal moved motion of confidence.

Some of the Congress MLAs staying in a hotel here could not reach the assembly on time due to heavy rainfall and traffic congestion.

The city roads are flooded due to incessant rainfall.

Also Read: Why The Truce Between Ashok Gehlot And Sachin Pilot Stands On Fragile Ground

The session comes after a month-long political crisis in the state which started with the rebellion by Sachin Pilot and 18 other Congress MLAs.

While Pilot's chair was placed in the second row from the front, Singh was seen sitting on a separate chair in the last row.

With the disgruntled MLAs led by Pilot back in the party-fold following the intervention of the top leadership, the Congress is likely to pass the floor test. The Congress seems confident of winning the motion with the support of 107 MLAs in the 200 member assembly. The BJP has 72 members.

This was announced Thursday at the Congress Legislature Party meeting chaired by Gehlot.

Pilot had led a rebellion against Gehlot, seeking a change in the party’s leadership in Rajasthan.

At the CLP meeting held at his residence, Gehlot urged Congress MLAs to forget the acrimony of the past month and move on.

Meanwhile, Pilot shook hands on Thursday with Chief Minister Gehlot, the image marking the patch-up between the two party factions in the state.

Pilot was also sacked as the state’s deputy chief minister and Gehlot referred to him as “useless”, using the Hindi term “nikamma”.

MLAs loyal to Gehlot, still camping together at a hotel, expressed dissatisfaction with the dissidents’ return. But the chief minister has urged them to “forgive and forget”, and move on.

The party had put out a similar picture following the reconciliation between the two after the 2018 assembly polls, when Gehlot was picked by the party for chief minister’s post and Pilot settled agreed to be his deputy.

A Breastfeeding Myth, And Some Superfoods