A 31-second video of Debsmita Chowdhury has gone viral. She says, 'I am proud of the education that I acquired at the University'. 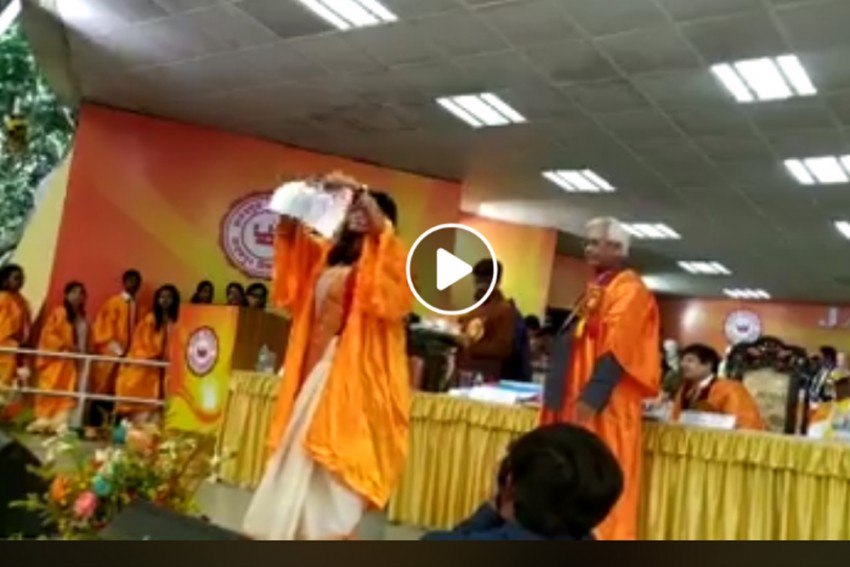 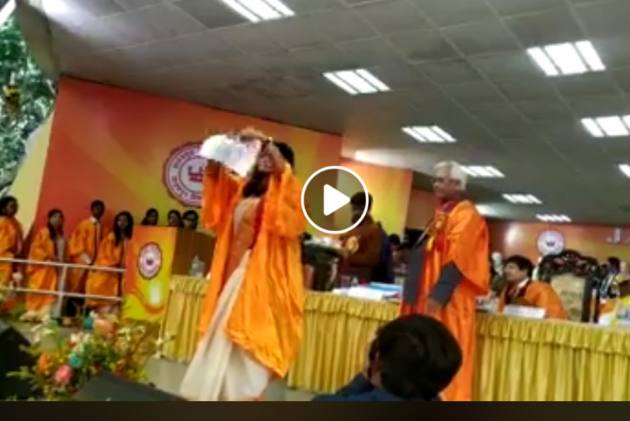 "Debsmita Chowdhury," announced the presenter; she emerged from behind the dais with a piece of paper in her left hand, walked to the middle of the stage, where Pro-Vice-Chancellor of Jadavpur University, Pradeep Ghosh, was waiting to honour her with a gold medal and degree.

Chowdhury, a student of international relations, shook hands with Ghosh and requested him for a moment. She kept her medal and certificate on the table, took a couple of steps forward, and tore apart the Citizenship Amendment Act (CAA) document.

"Hum kagaz nahi dikhayenge (We will not show the IDs)," she said, raising a clenched fist and adding, "Inquilab Zindabad."

Speaking to Outlook over the phone, Chowdhury said that initially, she too was "nervous because it was the first time I was being felicitated with a gold medal."

"But since I was getting a gold medal, I had some extra time on stage that my classmates didn't. So, I used that time to protest," she said.

Chowdhury said the "atrocities on students of Jamia Millia Islamia and Aligarh Muslim University had already triggered a response" from their counterparts across the country.

She adds that her "act of defiance" was directed more towards the "anti-student and anti-human policies of the Modi government".

A 31-second video of Chowdhury has gone viral on social media. She says she was "proud of the education that she acquired at the University", which also gave a chance to express her "discontentment", adding "our Jadavpur University has always been anti-establishment."

"There were rumours that I tore up my degree, but it was the Act that I tore apart to register my protest," she said.

Chowdhry added: "There were farmers, who walked to Delhi, and Prime Minister Narendra Modi didn't care to meet them even for once, but he has time for foreign dignitaries."

Student representatives at the varsity said that 25 others did not take their certificates in protest against the "communal" legislation and the "attack" on students elsewhere who were protesting against the law, news agency IANS reported.

Protests against the newly amended Citizenship law and National Register of Citizens (NRC) have erupted across cities and Universities in India, with protesters demanding its withdrawal. More than 20 people, across the country, have lost their lives after police's action against the demonstrators.

Modi and Home Minister Amit Shah have tried to allay the fears of people, but the protests continue to rage, particularly in the national capital, Karnataka, Assam and West Bengal.