Underneath is written whoever brings back Leader of the Opposition Tejashwi Yadav will be given a reward of Rs 5,100 and a footnote added he has been missing since the Lok Sabha polls results were declared. 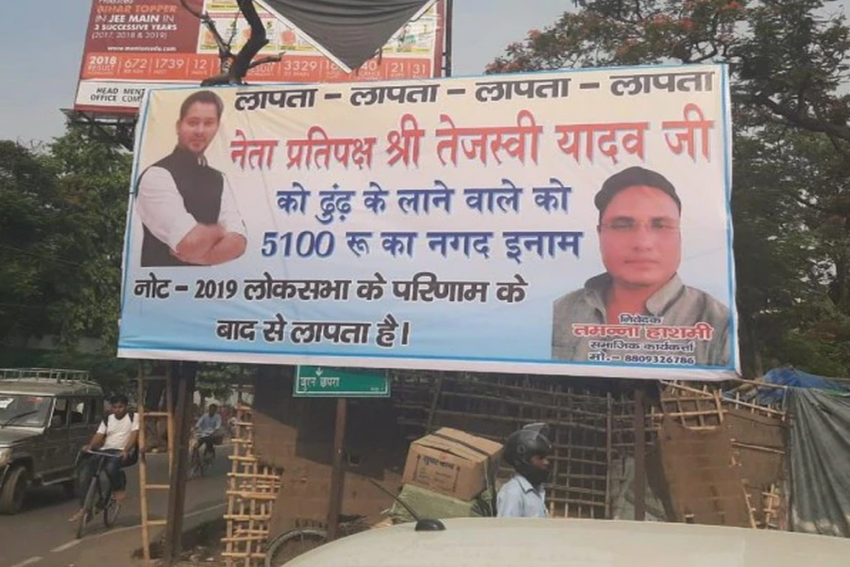 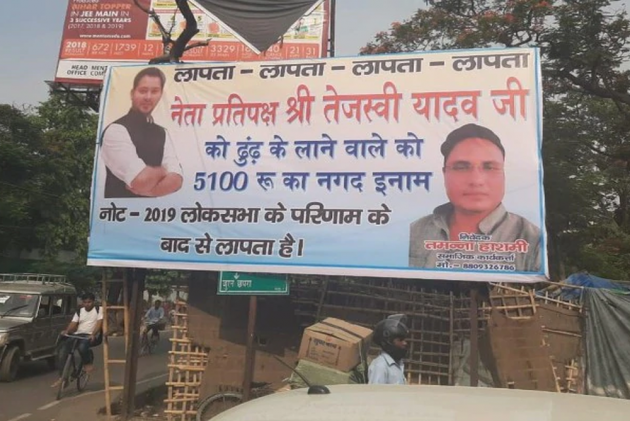 A poster has come up in Muzaffarpur town of north Bihar declaring a reward of Rs 5,100 for anyone who traces "missing" RJD leader Tejashwi Yadav, who has not made any public appearance since the drubbing in the Lok Sabha polls.

Muzaffarpur district has been reeling under a severe outbreak of brain fever that has killed more than 100 children.

Put up by Tamanna Hashmi, a local social activist, who recently filed a petition in a local court demanding that the Centre and the state government be taken to task for "failing" to contain the outbreak, the gigantic poster has a screaming heading in 'Missing! Missing! Missing!'

Underneath is written whoever brings back Leader of the Opposition Tejashwi Yadav will be given a reward of Rs 5,100 and a footnote added he has been missing since the Lok Sabha polls results were declared.

Interestingly, two days ago RJD national vice-president Raghuvansh Prasad Singh had said, "I do not know where Tejashwi Yadav is. The World Cup is underway and perhaps, being a cricket enthusiast, he is in England to watch the tournament."

Singh had made this remark in response to reporters' query about the 30-year-old RJD heir apparent's whereabouts.

However a day later. RJD Rajya Sabha member Manoj Jha, who a close aide of Tejashwi Yadav, claimed he is in New Delhi and keeping a close watch on the AES outbreak.

Having taken over the reins of his party following the imprisonment of his father and RJD founding president Lalu Prasad, Tejashwi Yadav spearheaded the party's campaign for the Lok Sabha polls.

However, the RJD contesting in alliance with four other parties including, its old ally the Congress, drew a blank in its worst-ever performance since inception in 1997.

After the debacle, the young RJD leader only made a brief appearance in the state when the party held a meeting to review the causes that led to its humiliating defeat.

He has been away for the most part and recently there had been rumours that he had gone to Singapore where one of his sisters lived.

Meanwhile, his elder brother Tej Pratap Yadav whose alleged heartburn over the clout of the younger sibling contributed to the party's dismal performance left for Ranchi to meet Lalu Prasad, who is serving sentences in fodder scam cases.