'I am confident that with the blessings of Bapu, we Indians will follow our duties and achieve the goals set during this Amrit Mohatsave,' says PM Modi 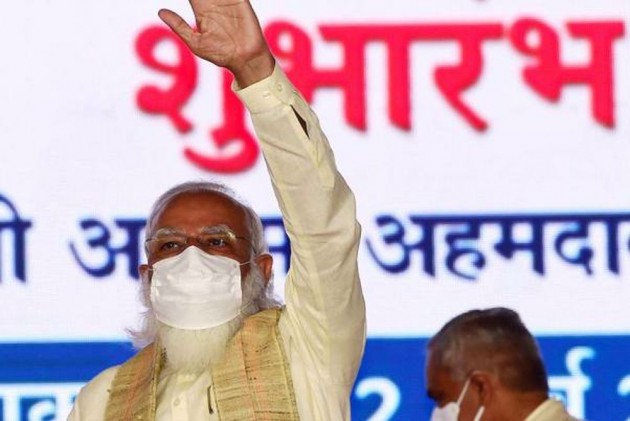 After landing at Ahmedabad airport on Friday, Modi paid floral tributes to Mahatma Gandhi at Sabarmati Ashram. He also visited Hriday Kunj, the house in the Ashram where Mahatma Gandhi stayed with his wife Kasturba from 1918 to 1930.

PM Modi wrote in the visitors' book that the Mahotsav is a tribute to our freedom fighters and freedom struggle.

"By coming to the Sabarmati Ashram and with the inspiration of Bapu, my determination for nation building is strengthened," the prime minister wrote.

Azadi Ka Amrit Mohatsav is a tribute by our people to our freedom fighters and freedom movement. During the celebrations the country will not only remember all the important milestones, important times during the freedom movement but also gain new energy for development of our future, Modi wrote.

"I am confident that with the blessings of Bapu, we Indians will follow our duties and achieve the goals set during this Amrit Mohatsave," he added.

Modi addressed the gathering at the venue of the cultural programme adjacent to the Ashram to mark the start of activities related to the 75-week celebration.

"Todays #AmritMahotsav programme begins from Sabarmati Ashram, from where the Dandi March began. The March had a key role in furthering a spirit of pride and Aatmanirbharta among Indias people. Going #VocalForLocal is a wonderful tribute to Bapu and our great freedom fighters," Modi tweeted before the launch of the celebrations.

Today’s #AmritMahotsav programme begins from Sabarmati Ashram, from where the Dandi March began. The March had a key role in furthering a spirit of pride and Aatmanirbharta among India’s people. Going #VocalForLocal is a wonderful tribute to Bapu and our great freedom fighters.

"Buy any local product and post a picture on social media using #VocalForLocal. A Charkha will be installed near Magan Niwas at Sabarmati Ashram. It will rotate full circle with each Tweet related to Aatmanirbharta. This shall also become a catalyst for a peoples movement," Modi tweeted before the Mahotsav launch.

He said it will be a real tribute to the freedom fighters.

In a Facebook post to mark the launch of the "Azadi Ka Amrut Mahotsav", a 75-week festival to commemorate 75 years of the country's Independence, Naidu said this is a defining moment in India's journey and an opportunity to recollect the legacy handed down by Mahatma Gandhi and countless other freedom fighters.

He said it is a solemn duty of people to remember and celebrate the extraordinary spirit of the freedom fighters, their supreme sacrifices and their lofty ideals.

Remembering the Dandi March, Naidu said it electrified the nation at that time with a simple but powerful symbol of salt.

He also stressed the need to educate youngsters on the lives of the country's great heroes and how thousands of courageous men and women stood on the frontline of the freedom struggle and helped India overthrow the yoke of colonial rule.

The vice president said as the citizens of the country enjoy the fruits of independence, they must also understand that the vision of freedom will be fully realised only when they achieve the goals and promises they have set for themselves in the Constitution.

The Central government has constituted a committee under Union Home Minister Amit Shah to chalk out policies and planning of various events to be undertaken as part of the celebrations.

Gujarat Governor Acharya Devvrat and Chief Minister Vijay Rupani were present at the launch of the celebrations.

Meanwhile, the Delhi government will also roll out its 75-week-long series of programmes 'India@75' by hosting an evening of patriotic songs at Connaught Place's Central Park on Friday.

"Hon'ble Chief Minister Shri @ArvindKejriwal will address 'Freedom@75' program of the Delhi govt. The program will be held at Central Park, Connaught Place on Friday, March 12 at 6 PM, and will commence 75 weeks of celebrations to mark India's 75th year of independence," the chief minister's office tweeted.

Hon'ble Chief Minister Shri @ArvindKejriwal will address 'Freedom@75' program of the Delhi govt. The program will be held at Central Park, Connaught Place on Friday, March 12 at 6 PM, and will commence 75 weeks of celebrations to mark India's 75th year of independence.

Lt Governor Anil Baijal reviewed the preparations for the roll out of programmes and events under 'Azadi Ka Amrut Mahotsav' with Delhi Chief Secretary Vijay Kumar Dev and other senior officers and asked them to constitute a committee for the event's planning and smooth execution.

"Advised the Chief Secretary to expeditiously constitute the State Level Committee to plan and oversee the smooth implementation of events and programs," Baijal tweeted after the meeting.

A Delhi government statement said Kejriwal called upon people to make India the number one nation in the world.

The Delhi tourism department will organise the event marking the year-long activities that will continue as part of the celebrations. The event will be open for public but entry will be limited to maintain Covid-19 norms and guidelines, it said.

The 75 week-long programmes organised by the city government will highlight Delhi's role in the freedom movement and its journey in the last 75 years, including the vision of Delhi for 2047, when India will complete its 100 years of Independence.