Prime Minister Narendra Modi, who is in the UAE on the second leg of his three-nation tour, in an interview with the Khaleej Times on Friday, said his government scrapped Article 370 of the Constitution to end the isolation that had kept Jammu and Kashmir underdeveloped 'to serve the vested interests of a few.' 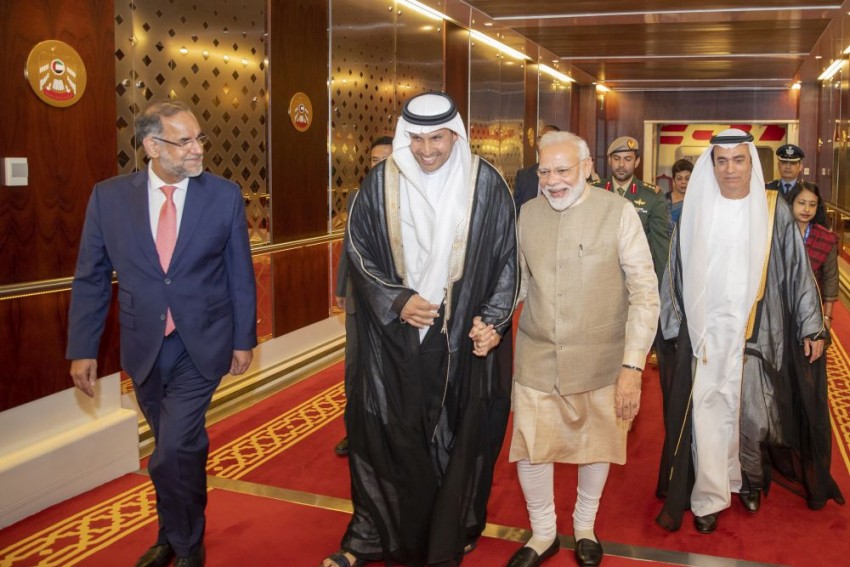 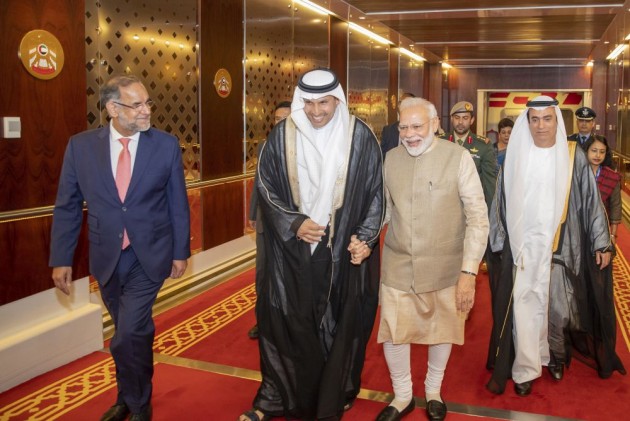 Prime Minister Narendra Modi has said Jammu and Kashmir's special status was revoked to end its "isolation" which allowed some of the youth to be "misguided, get radicalised and take to violence and terrorism".

Defending his government's moves, Modi said it was India's "internal steps" which was taken in a "completely democratic, open, transparent and constitutional" manner.

Modi, who is in the UAE on the second leg of his three-nation tour, in an interview with the Khaleej Times on Friday, said his government scrapped Article 370 of the Constitution to end the isolation that had kept Jammu and Kashmir underdeveloped "to serve the vested interests of a few."

"This isolation also allowed some of the youth to be misguided, get radicalised and take to violence and terrorism," he said.

"We cannot afford to let these tendencies get any foothold in our harmonious society and distract us from the primary tasks of growth and development of the entire country. I appreciate the understanding the UAE and its leadership have shown for our steps and our reasons for taking them," said Modi, who held talks with the Crown Prince of Abu Dhabi, Sheikh Mohammed bin Zayed Al Nahyan on Saturday.

Responding to a question on the scrapping of Article 370 from the Constitution and whether the Gulf countries understand India's concerns, Modi said, "As far as Article 370 is concerned, our internal steps were taken in a completely democratic, open, transparent and constitutional manner. They were designed to end the isolation that had kept Jammu-Kashmir underdeveloped to serve the vested interests of a few."

He thanked the UAE's leadership for backing India on the issue.

The UAE has backed India on its decision to revoke provisions of Article 370 in Jammu and Kashmir and bifurcate the state into two union territories.

The Gulf nation's ambassador to India Ahmad Al Banna had said that he viewed India's decisions relating to Jammu and Kashmir as an internal matter of the country.

The BJP government claimed that Article 370 was the cause of the lack of development in Jammu and Kashmir as it limits the Centre's powers to implement special provisions and schemes.

On terrorism, Modi said, "India has been a victim of cross-border terrorism for over four decades. Both India and the UAE have a common interest in ensuring that the anti-humanity forces that shelter or promote terrorism in any way are compelled to give up their destructive policies."

He said the UAE has shown "full understanding" of the strong steps India has taken against terrorism. "We have exemplary cooperation to ensure mutual security," he said.

"Terrorism and extremism are a threat to humankind. It is the responsibility of everyone to oppose them with all the force at their command. India and the UAE have rapidly expanded their cooperation for security, based not only on their common concerns but also their shared values," he said.

Prime Minister Modi said strengthening ties with the UAE remains one of the most important foreign policy priorities of his government.

Talking about cooperation in all sectors between India and the UAE, he said, the rapport shared between the leaders has helped the countries break new ground.
"Tolerant UAE and secular India", he said, are "natural partners".

"To millions of Indians, the UAE is a second home. They feel welcomed in the UAE's ethos rooted in respect for diversity. How many countries in the world have a separate Minister for Tolerance in the Cabinet? I am gratified that the UAE leadership consciously promotes coexistence and harmony. It is a landmark development to allot land for the construction of a temple for the Indian community working and living in the UAE. I truly appreciate this gesture by the UAE's leadership."

He said since the time of Sheikh Zayed bin Sultan Al Nahyan, the founding father of the UAE, the country has been a beacon of enlightenment and forward-looking policies.

"That's why the world has come to it and made this place its home and preferred business partner," he said.

Restrictions Eased In Most Areas Of Kashmir Valley