Home  »  Website  »  National  »  Opposition Lashes Out At BJP, Accuses It Of Not Upholding Constitutional Principles

Opposition Lashes Out At BJP, Accuses It Of Not Upholding Constitutional Principles

'Not certain constitutional norms are safe in hands of the present establishment,' says Ex-PM Manmohan Singh 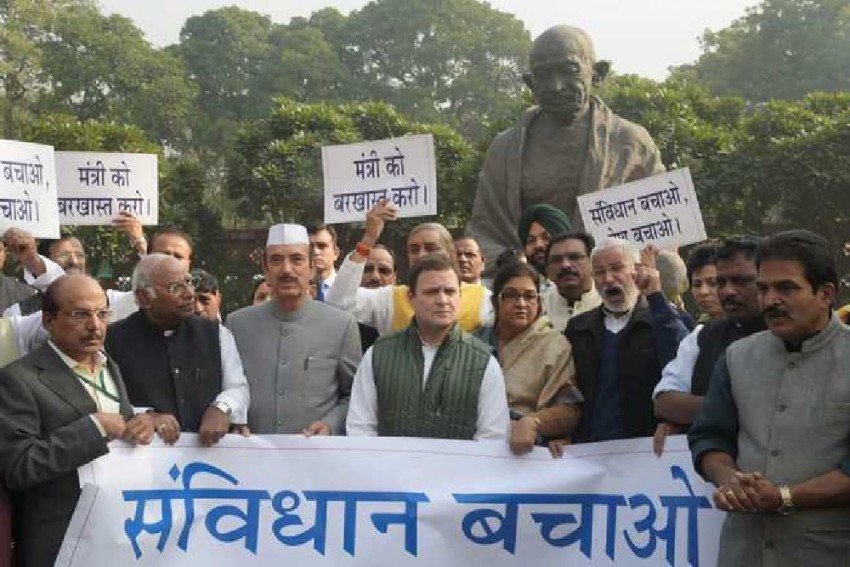 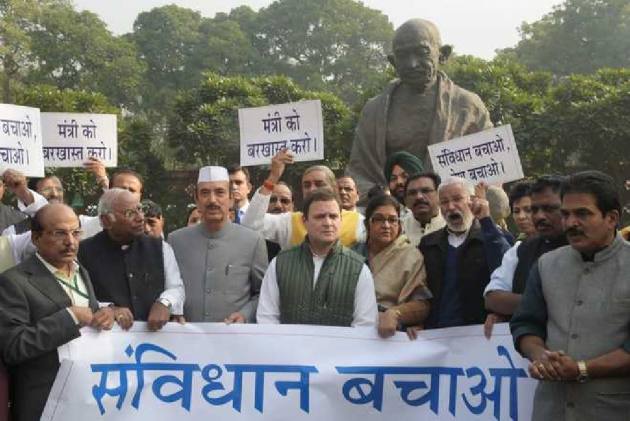 On India's 70th Constitution Day, opposition parties trained their guns on the ruling BJP saying the saffron party did not uphold constitutional values.

As the Constitution Day came amid the political crisis in Maharashtra, the Congress tore into the BJP-led central government. The party has repeatedly criticized the BJP saying it formed the Maharashtra government on November 23 in "contravention of constitutional laws".

As the NCP, Congress and Shiv Sena were holding deliberations over an alliance to form the Maharashtra government, BJP's Devendra Fadnavis was sworn in as chief minister on Saturday early morning with support from NCP's Ajit Pawar.

Upset over political developments in the state, the opposition parties, including the Congress, DMK, the SP, NCP and the Left parties, boycotted Constitution Day celebrations in the Central Hall of Parliament and held a joint protest in front of the Ambedkar statue inside Parliament complex.

The Congress during the protest said the Constitution written by Ambedkar is being undermined today by the BJP-led government.

Responding to a question of Opposition boycotting joint session of Parliament on the Constitution Day, Singh said: "It is not a disservice to the Constitution. It is a reminder to everyone that the constitutional norms are being violated by the present establishment."

Sonia Gandhi read out the preamble of the Constitution at Ambedkar statue in Parliament premises and said that the government actions in Maharashtra are contrary to the Constitutional values.

Congress leader Anand Sharma said, "It is Modi government which started the 'Constitution Day'. What kind of democracy is this in which only President, Prime Minister, Vice President, and Speaker of Lok Sabha have a voice while the Opposition has no role? This is not what the Indian Constitution says. It does not say that only government programs should be conducted."

The Shiv Sena said it will skip the joint session as well in protest of BJP's actions in Maharashtra.

The Aam Aadmi Party too boycotted the joint Parliament sitting saying the BJP had no right to celebrate the day after destroying the Constitution.

"The BJP has no right to celebrate the Constitution Day after destroying it, and so the AAP has decided to boycott the joint Parliament session," Sanjay Singh, the Leader of AAP in Rajya Sabha, said.

"It openly abuses the Raj Bhavan and pretends to observe Constitution Day, the soul of Baba Saheb must be weeping with BJP dictatorship," Singh added.

Speaking in the Parliament to mark the day, PM Narendra Modi paid tribute to B R Ambedkar, known as the 'Father of the Constitution' and said India has strengthened its democracy in the past 70 years.