As per a World Bank study, a severe pandemic could cause economic losses of nearly 5 per cent of global GDP. 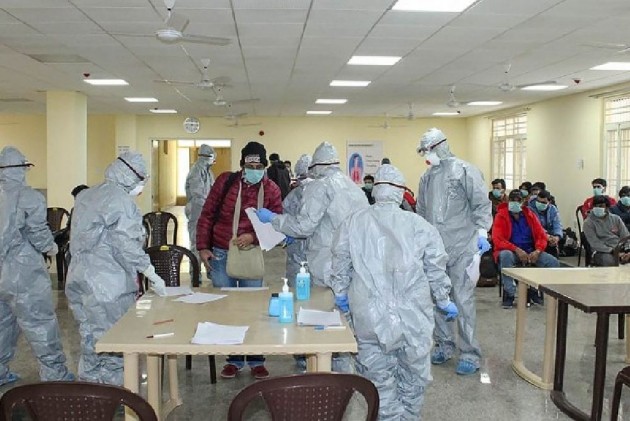 Pandemics can be extremely damaging because of their impacts on economies of directly or indirectly affected countries. As global value chains, supply chains and human capital are intermingled globally in an extremely complex manner, and, as such, outbreaks have the potential to impact the whole global economic system.

As per a World Bank study, a severe pandemic could cause economic losses of nearly 5 per cent of global GDP( $3 trillion). With 17 per cent of Global GDP, Chinese share in the global economy today is four times of 2003 ( SARS epidemic), and the current outbreak is estimated to cost the global economy up to $360 billion or more by affecting global value chains, financial markets, flow of capital, and price levels, affecting both firms and households.

The danger of it becoming a pandemic threatens local demand and supply shocks in other countries including India, as China is facing today.

Coronavirus and Pandemic Vulnerability of India

Researchers of California based RAND corporation had developed the Infectious Disease Vulnerability Index as a tool to identify countries that are potentially most vulnerable to infectious disease outbreaks because of a confluence of factors. As per this index, India’s score is lower than countries like Sri Lanka, Philippines and much lower than China. Due to much smaller health infrastructure in terms of para-medical human resources, equipment, facilities and virological research, India is much more Vulnerable than China to combat the event of a Pandemic.

In recent years, the  Chinese economy has shifted away from intensive manufacturing and exports and has embraced more services and internal demand thus becoming much more vulnerable towards disruptions than ever before. It’s the natural ability for a quick rebound through increased manufacturing to erase the effects of disease disruptions (similar to 2003 SARS outbreak) is not possible due to the changed economic contours. China ended last year with GDP growth of 6 per cent (lowest since 1990). Thus, it can be concluded that the coronavirus is hitting a very vulnerable economy which has high global exposure. 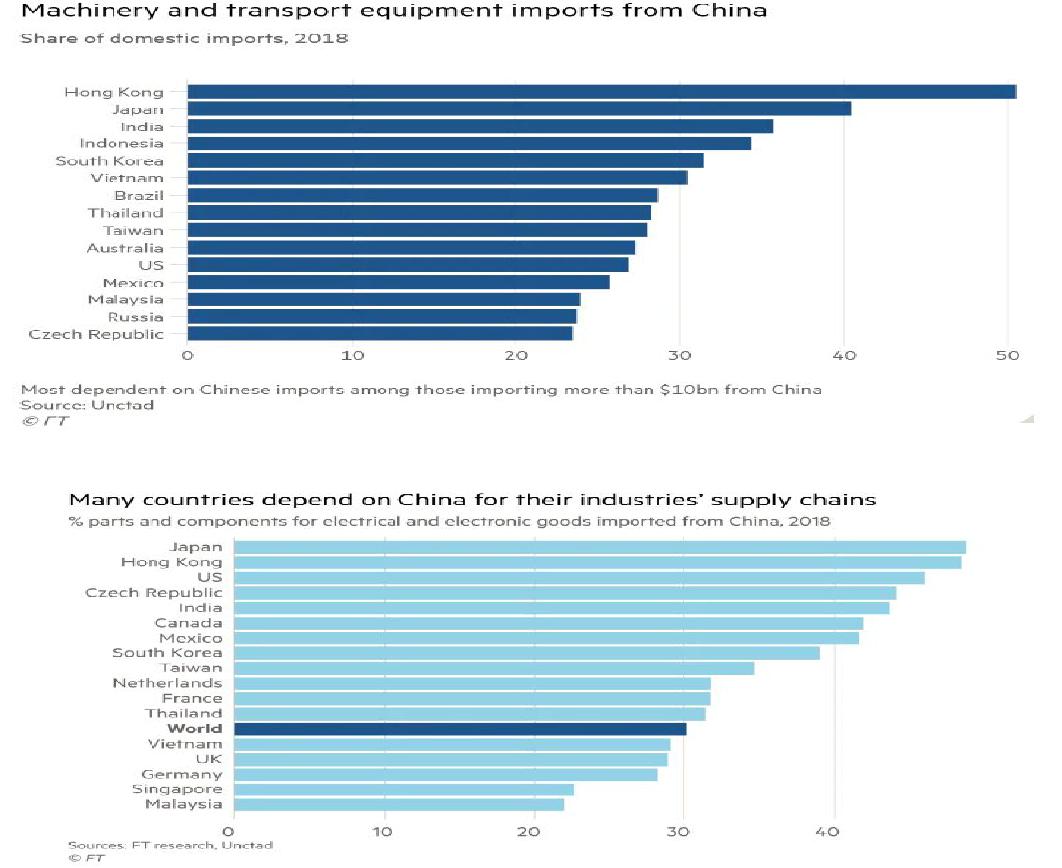 China is central to a diverse range of global supply chains being the largest exporter of intermediate manufactured goods. In most of these goods, China is the cheapest and dominant supplier globally and, therefore, sourcing alternative supplies will be costly for manufacturers. For example, Asian supply chain has 40 per cent while the US has 10 per cent dependency on China for its intermediate goods.

Following 2 graphs depict the close and complex integration of China with global manufacturing: 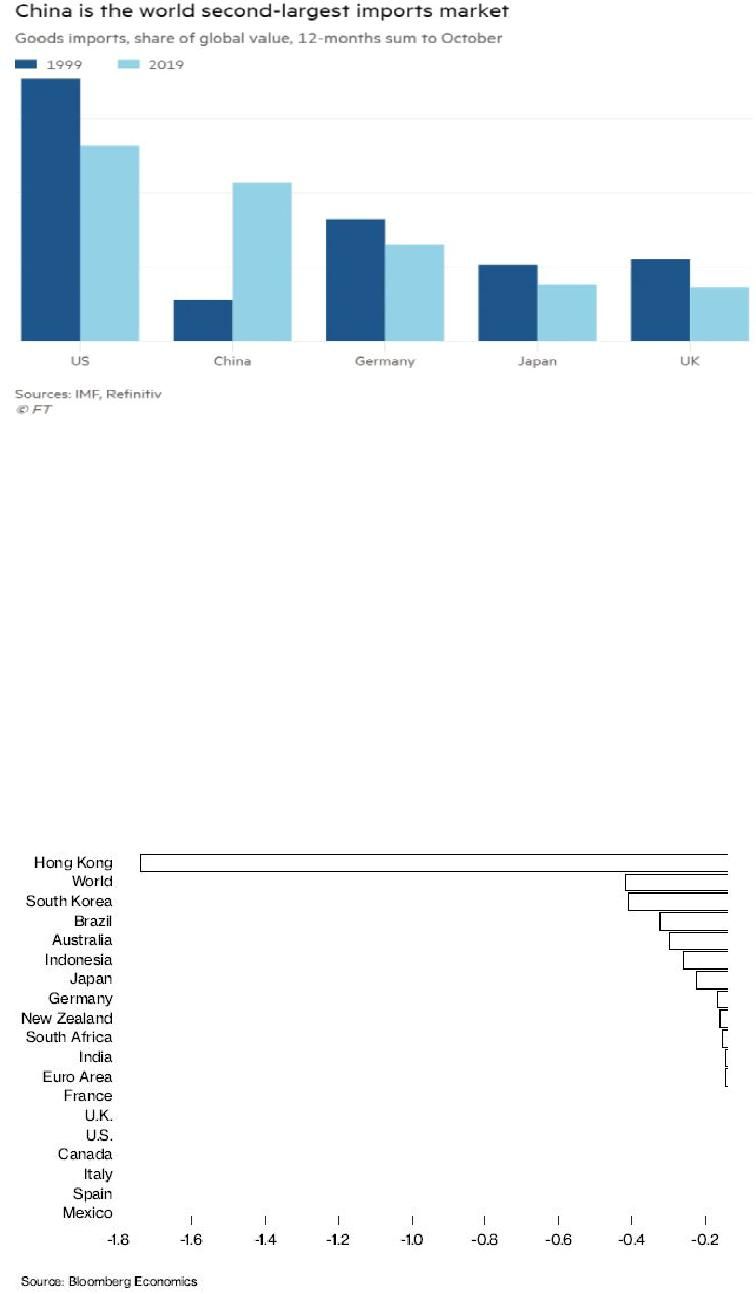 China is also one of the biggest importers of the world, especially raw material, metals, crude oil and similar commodities. 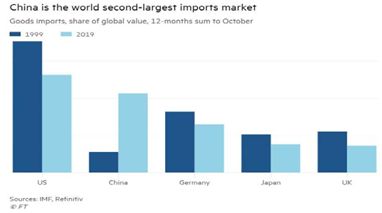 Chinese demand reduction will create downward pressure in metal and mining industries throughout the world. The ripple effects are being felt keenly in certain commodities like crude oil and copper, both of which China normally gobbles up in huge quantities. Prices for oil are down 15 per cent since the outbreak first began, which is bad news for oil-dependent economies.

Following graph depicts the impact on GDP growth rates around the world due to the impact of SARS epidemic in China during 2003: 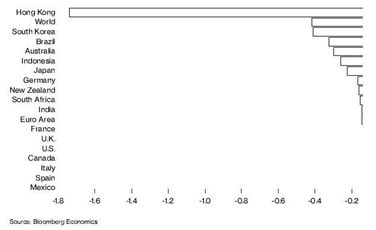 (Graph: Impact on GDP Growth due to SARS situation in China, 2003)

It is evident from the above graph that the Indian economy is immune to disruptions in Chinese economy caused by epidemics like SARS. However, in 2002-03, India’s total trade with China was only $4.8 billion which has now expanded 18 times to $87 billion (2018-19). The country accounted for 14 per cent of Indian imports in 2018-19 and 5 per cent of India’s exports in the same year. India exported mostly raw materials and industrial inputs to China such as organic chemicals ($3.2 billion), mineral fuels ($2.8 billion), cotton ($1.8 billion), ores ($1.2 billion), plastic materials ($1.1 billion) in 2018-19. On the other hand, the major items imported by India during the same period include electronic items ($20.6 billion), machinery ($13.4 billion), organic chemicals ($8.6 billion) and plastic items ($2.7 billion).

For sectoral analysis of the impact on the Indian economy due to the Chinese economy, we refer to the following chart detailing the impact on Indian imports from China. 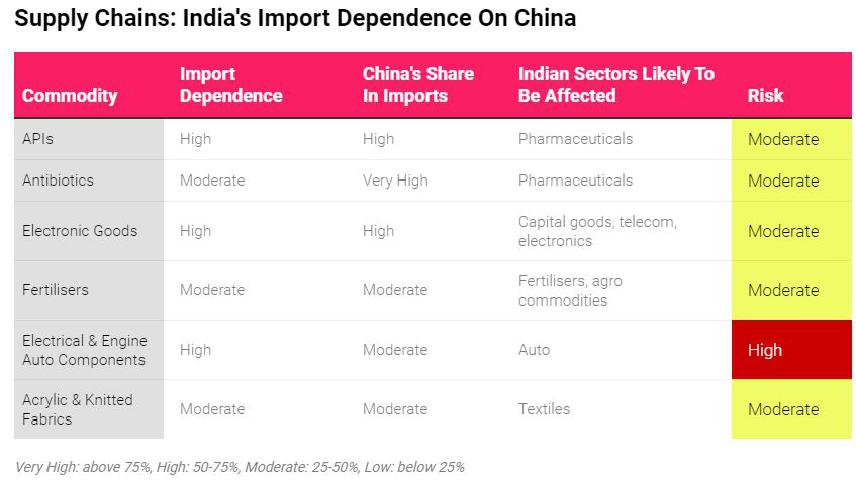 As depicted from the graph above, many sectors of the economy will either severely or moderately impact the supply side issues of Intermediate goods from China. As per Trade Promotion Council of India, approximately 85 per cent of active pharmaceutical ingredients (APIs) imported by Indian companies are from China.

There may be far-reaching consequences for India's automobile sector as vendors in India rely on supplies of components and raw materials from China. Alternative supply destinations will increase the cost of manufacturing. Already battling one of the worst slowdowns in over two decades, this outbreak would mean further doom for this sector. The silver lining, however, would be lower fuel prices for motorists which may create some additional demand for car sales.

Indian agrochemicals industry will also be significantly impacted due to disruptions in Chinese imports due to dependency for bulk raw material imports. If that happens, there may be some price increase in agrochemicals from the Kharif season that starts in April. This will have a negative impact on the Agricultural Sector already struggling with various other issues.

Textile fabrics for the readymade garment industry and different components like rubber soles of the footwear industry may also get impacted due to supply chain disruptions from China. These are highly cost-sensitive segments and any alternate sourcing will add substantially to the overall cost-reducing the competitiveness of the finished goods. All this put together could further worsen the recovery in industrial production over the near to medium term.

Another sector that might reel under the coronavirus attack is tourism. India's tourism (travel services exports) contributed only 1 per cent of GDP in FY19. In 2019, Chinese accounted for 3.12 per cent of the total foreign tourist arrivals in India and the number is increasing every year. However, that might see a reversal this year, at least in the first quarter. The travel advisory against China will also dampen the aviation industry. Almost all Indian carriers have temporarily suspended service on China/Hongkong routes. Albeit slowdown in this sector will not impact overall GDP growth, it will have a substantial impact on firms working in this sector.

Slowing down of Chinese economy will also result in weaker demand for import of raw materials for its manufacturing industry. Export of commodities like basic metal ores may be significantly impacted. However, moderation of international prices of several commodities due to weak Chinese demand will have a positive impact on the Indian economy. Lower crude prices will help in managing current account deficit while lower cement rates will encourage more construction activities. Following chart depicts the impact of softer commodities prices (due to weak Chinese demand) on different business segments.

India was the only Asian economy that didn’t witness major decline in GDP growth due to the SARS impact in 2003. It is expected to follow a similar trend this time as well despite almost all other Asian economies contracting because of least economic Exposure to China.

As per recent reports, global buyers are seeing India as China's replacement to source ceramics, homeware, fashion and lifestyle goods, textiles, engineering goods and furniture. With local production being affected, there could be an increase in China’s imports from other countries providing an opportunity for Indian manufacturers to export more to China and create new export sectors not available earlier.

It’s also a great opportunity for Indian manufacturers to reposition themselves in global value chains by becoming an alternative destination of various intermediate goods especially in the pharmaceutical and automotive supply chains where India does have the capability to produce almost all intermediate goods. Therefore, while the auto industry will initially suffer due to spare parts supply issues, it will also encourage MNEs to increase investment in India for manufacturing of all intermediate goods in Automotive Supply Chains. The same may also happen with smartphone manufacturing. It will also provide a great opportunity for India to increase its international exports in agricultural and biological goods due to apprehensions related to Chinese products.

Weak Chinese demand for steel and cement will moderate their international prices. Real estate industry has a great opportunity to take advantage of lower prices and increase construction activities. This may also be the right time for the government to increase public expenditure into infrastructure projects.

It is too early for an exact prediction of different scenarios because of non-availability of reliable data about coronavirus outbreak. Although at this early stage, only negligible economic impact on Indian Economy can be seen, uncertainty on the eventual impact implies that India is not immune to shocks in Chinese economy.

Economic vulnerability to external shocks stems from heavy exposure to just one country or sectoral activity. Coronavirus outbreak once again establishes the importance of diversifying export partners and funding sources.

Also, as discussed earlier, India is much less prepared to combat any pandemic as compared to China both in terms of economy and health infrastructure. Economic losses are simply a negative externality of such pandemics and Indian economy will be able to take advantage of the current situation only when the country is able to contain and fight Coronavirus effectively.