Of Tuskers And Mahouts: The Elephantine Issues Of Jaipur's Elephant Village

The Covid-19 lockdown has had a crippling effect on the lives of elephant owners and mahouts in Jaipur's Haathi Gaon. 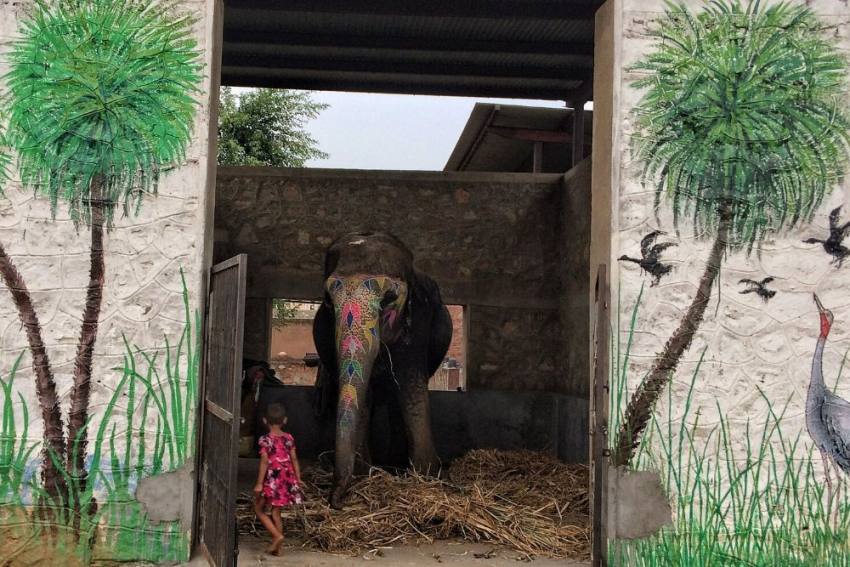 The livelihood of elephant rearers in Jaipur's Hathi Gaon has taken a serious hit ever since the lockdown began.
Photograph by Tabeenah Anjum
Tabeenah Anjum 2020-06-02T13:05:01+05:30 Of Tuskers And Mahouts: The Elephantine Issues Of Jaipur's Elephant Village 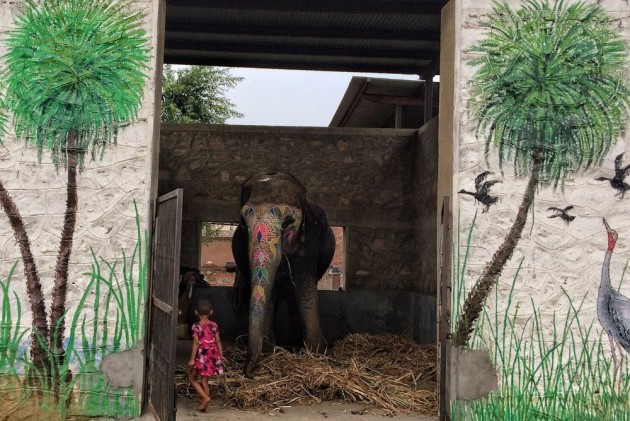 A few tuskers are ambling around the small pond at Haathi Gaon (elephant village) on the outskirts of Jaipur. Some others are being soaped and scrubbed by their keepers. The animals playfully nudge each other, warring for space inside the pond, the water a source of much relief from the searing May heat. The animals seem to be in no hurry to leave the pond.

The Covid-19 lockdown has had, much like everywhere else, a crippling effect on the lives of elephant owners and mahouts in the village. Elephant rides at the Amber Fort and weddings, which used to be their primary source of earnings, have come to a halt ever since the lockdown began.

For Munna (37), a mahout, the situation is dire. "My livelihood is under threat for the last three months. I have not earned a single penny since March 25. There is no hope either as my work is linked with tourism and I think it will be the last thing to resume,” he says. The mahout has a 27-year-old elephant who he has named Vrinda.

He begins the day by feeding Vrinda, the first of her two daily meals. Twice a day, he takes her for a bath – she gets one with fresh water in early morning and a long dip in the pond during late afternoon where she also meets her friends Laxmi, Gopi and Shakuntala. 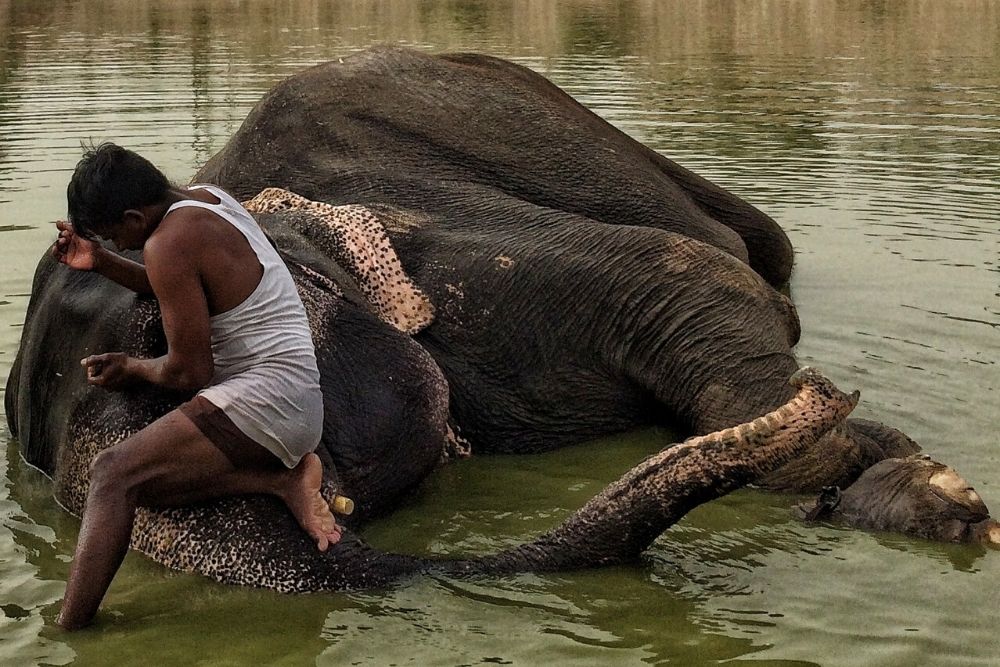 "The elephant owner used to give us a basic salary. But our main income used to be the tips, totaling between Rs 15,000-18,000 a month, which the foreigners would give us. We would usually make about Rs 20,000 but now, in absence of work, we are only scraping through,” says Munna, who has four kids and is the only earner in the family. Besides Munna'a, there are 64 other mahout families living in the village and all of them have their backs against the wall in this lockdown.

Most of the elephant rearers have inherited the job from their fathers. Hathi Gaon was officially christened so by the state government in 2010. Spread over 305 hectares and close to the famous Amber Fort, the village hosts more than 65 elephants and as many mahout families. In the village, each elephant is put under a separate thaan (shelter) and the house of mahout is built next to it. There are 103 elephants in Jaipur, including those of Hathi Gaon, and the remaining too, live in the vicinity of the fort.

The Economy of Food

Munna’s wife, Parveen, says that the family has cut down on food by 50 per cent and her kids are becoming frail and weak. She also treats Vrinda like one of her kids. "Earlier, I used to wake up at 5 in the morning and make thick chapatis from 8 kg flour everyday. But now we don't serve her rotis anymore,” she says.

Even though the basic food requirement of elephants is broadly being met, the nutritional profile of the diet has shrunk because of fruits being absent from it. Praveen adds, “We just serve them sugarcane, fodder and water. It’s for the first time that they are not being served fruits such as watermelon, jawar kakdi, etc. in summers.” 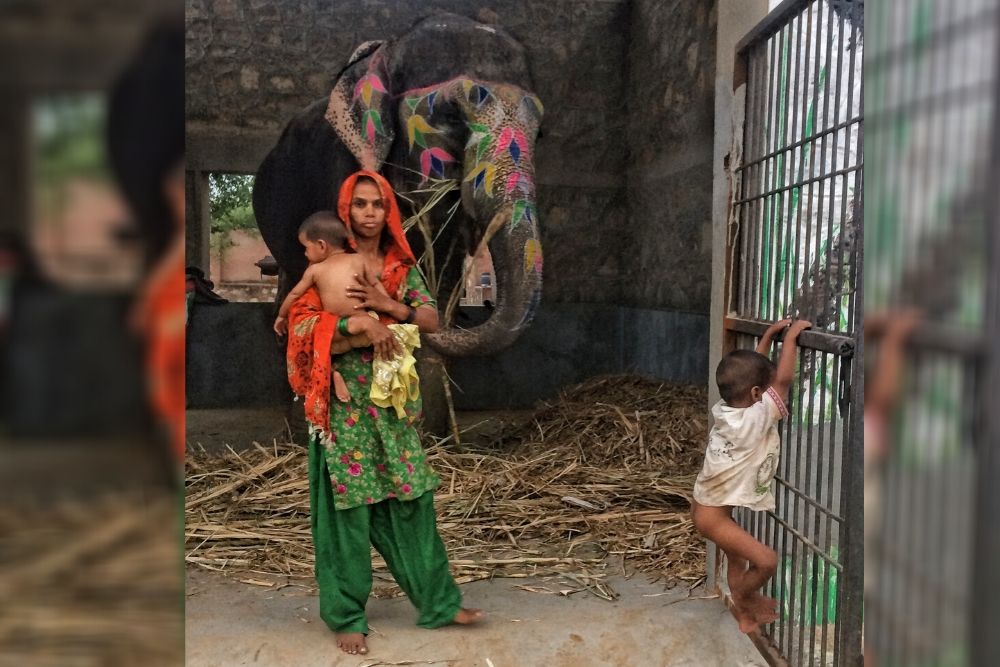 Sudarshan Sharma, in-charge of Hathi Gaon Hathi Kalyan Sansthan, a body of forest department officials and elephant owners formed for the welfare of elephants, says that each elephant owner is being provided Rs 600 everyday for the upkeep of elephants during the lockdown. “We have ensured that trucks delivering food (sugar cane and fodder) reach Hathi Gaon without any difficulty. We have also distributed 15 days’ ration to the families of elephant caretakers during this lockdown,” he says.

Earlier, the sugarcane and fodder used to arrive from Uttar Pradesh and Madhya Pradesh but during the lockdown both items are being brought from Sri Ganganagar district of Rajasthan.

The daily diet of an elephant costs anything between Rs 2,500-3,000 and is usually taken care of by the elephant owner. “An elephant eats three quintals of sugarcane bundles per day. Each quintal costs Rs 600. Besides, it also consumes one kg of dry guava, about 5-8 kg of flour, dry grass, and watermelons,” says Shafeeq Khan, who owns three elephants and is the chairman of Elephant Owners’ Association.

Keeping an elephant is proverbially expensive, he says, and demands that the daily allowance being given in the lockdown be increased. “Crores of rupees are lying in the sansthan and it should be distributed for the welfare of animal and its care takers. The amount of Rs 600 is too less; it should be made at least Rs 2,500 per day.”

For better keep of the animals, the state government in 2018 shifted the management of Hathi Gaon from the tourism department to the forest department. The forest department introduced an entry free for the Hathi Gaon, and the collection is spent on the maintenance and development of the village. Although the village has a veterinary hospital, the mahouts complain of water scarcity and having to spend additional money on water tankers every alternate day – a tanker costs about Rs 4,000.

Safari Should Be Banned: PETA

While much has been done to promote elephant tourism in state, conservationists are of the view that elephant safaris should be banned everywhere, including at Amber fort. The People for the Ethical Treatment for Animals (PETA) believes that the guidelines for care and management of captive elephants, as laid out by the Ministry of Environment and Forests in 2008, are being flouted in Rajasthan.

"States were asked to frame rules for management and care of captive elephants on lines of Kerala. It also suggests improving training facility for mahouts including wages and salary but nothing has been done so far. Also, as per the rules, the tourism rides are a form of cruelty to the animals,” says Manilal V, the chief executive officer of PETA. 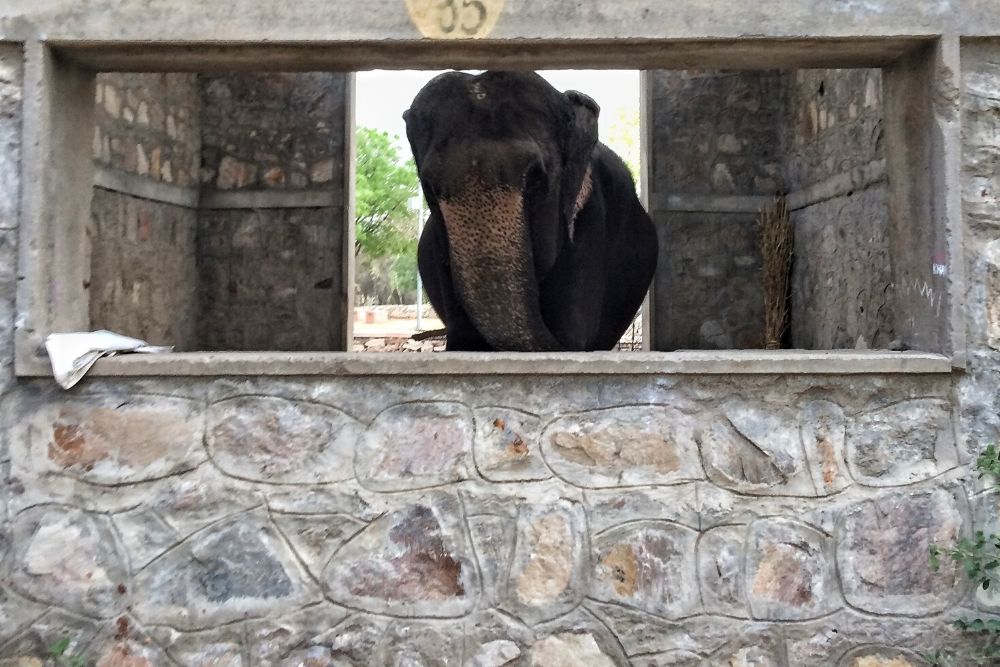 He adds that elephants are a Schedule I animal under Wildlife Protection Act, 1972 and should therefore not be kept in a captive state. “It is a sheer cruelty that they are paraded to the Amber fort for the tourists. Most of these animals are blind and diagnosed with tuberculosis,” says the PETA official.

As per the key findings of a 2018 report of the Animal Welfare Board of India (AWBI) report, out of 102 applications only 49 elephants can offer rides on plane terrains with one rider in addition to the mahout and only 43 can offer rides with two riders at a time. Out of the 102, 19 captive elephants were observed to be blind, with some being blind in both the eyes, rendering them unfit for any work. The safety of the elephants and people around them are at high risk if such wild animals are used for any purpose, including joy rides. Out of 91 elephants screened for TB, a disease that is transferable to humans by elephants, 10 elephants were found to be positive for TB.

Moreover 100 per cent elephants suffer from various foot problems including overgrown toenails with cracks, deformation, discoloration, overgrown cuticle around nails and in the inter-digital space, dry and cracking and thin, uneven and bruised footpads, etc.

Royalty and the Elephants

Elephants also have a historical importance in the state. Sawai Jai Singh, the former Maharaja of Jaipur, himself devoted time to the care of elephants and patronized the mahouts. Jaipur’s walled city has a locality called Pheel Khana, that is dedicated for mahouts. Because of history, the elephants became important elements of state’s culture and subsequently tourism.

"Giving up the Elephant Festival was unfortunate as it celebrated the legacy of our elephants and the mahouts. Hathi Gaon and the elephant rides at Amber were a big attraction for the tourists but with the covid-19, tourism is terribly hit,” says Tripti Pandey, author of India’s Elephants: A Cultural Legacy.

The 16th century paintings during the time of Maharaja Karan Singh II, the book says, reveal the old connection between the elephants and state’s royalty. “To keep it going I feel the tourism department must give them sustenance. Taking a cue from Thailand, the department could even come up with an online elephant festival to celebrate our legacy,” she says.

(Tabeenah Anjum is an independent journalist and photographer based in Jaipur.)