With no money to buy air tickets, stranded Indians demand that the embassies should be directed to utilize ‘community welfare fund’ to ferry them back. 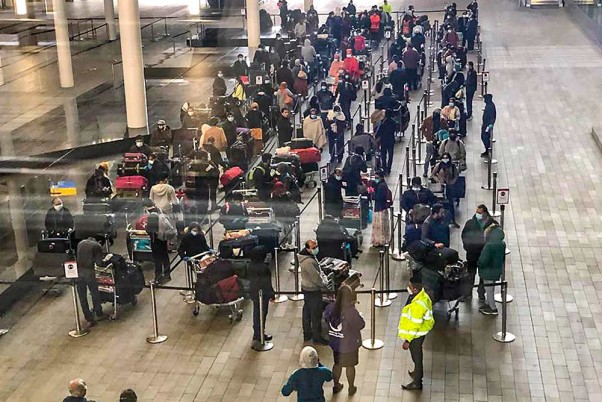 Thirty-year-old Shahina has been anxiously waiting for her husband Arif Mohammed (name changed) since Indian government’s announcement of repatriating its citizens from Gulf and other countries. Shahina, who is expecting her third baby in the last week of May, wants her husband to come back at the earliest.

Shahina has been sending out SOS messages to social workers in Oman to arrange for her husband’s return to Kochi, but in vain. With no salary for the last four months, Mohammed, who used to work as a cook in a small restaurant, has been living on the edge. “He has been starving for days now,” Shahina says.

Even as the Indian government is gearing up for the second phase of Vande Bharat Mission — one of the largest repatriation efforts to bring back the Indians stranded abroad, many like Mohammed have failed to avail the service with no money to buy tickets. Over the first week of repatriation, the government has brought back 8,500 Indians so far. The repatriates have to bear the charges of flying. To avail the tickets from Gulf countries to India, one has to fork out anything between Rs 12,000 to Rs 30,000.

In the second leg of the operation— slated to begin from May 16, India is looking to bring back 30,000 Indians from 31 countries including the Japan, Australia, France and Russia.

There are thousands like Mohammed, who are out of work since the pandemic hit Oman and other five Gulf Cooperation Council (GCC) countries – UAE, Kuwait, Saudi Arabia, Qatar and Bahrain. The pandemic only exacerbated the crisis of the countries, which were already reeling under the impact of the plummeting oil prices.

Oman-based social worker P.M. Jabir says that he receives between 100- 200 distress calls daily from the workers who have been out of job for months, who want to go back to India. “Most of them have no money and they live in the mercy of others. There are thousands of people who have lost their jobs. Even before the virus, jobs were hit by the oil crisis and layoffs have started already,” he says.

According to estimates, nearly 9 million Indians work in Gulf countries in areas such as construction, sanitation, transportation, hospitality and others.

Another migrant worker Noushad Shah (34) lost his construction site job three months ago in Muscat. Though Shah and his other three friends have been dependent on food packets distributed by social groups and embassy till now, he is clueless about what future holds. Shah says that his dream to return to his homeland seem to be elusive after knocking at many doors for help. For low-paid workers like him, the ticket charges are too high to afford. Speaking to Outlook over phone, Shah said that he came to Muscat three years ago from Kozhikode in Kerala, in search of good fortune. Left with no money, he rues that they don’t even have the option of walking home like the migrant workers back in India.

“We have to shell out minimum 15,000 for tickets. With no work and money now, I can’t even dream of that sum. The Indian government cares least about us,” says Shah.  For most of the migrants, the ordeal is compounded by fear of the pandemic as they share cramped living spaces with no possibility of social distancing.

Another stranded Indian worker Zubair, who has been laid off by the employer a month ago, says during the last holiday season, the tickets to Kerala cost him only Rs 12,000 whereas evacuation flights are charging more. “Air India is charging almost Rs 14,000 to take us back. How can we afford such money?”

In an interview to Outlook last week, Union Civil Aviation minister Hardeep Singh Puri stressed that Air India is not charging exorbitant rates for repatriation flights and the government is compassionate towards the Indian expats. However, Jabir points out that the Indian government should allow other airlines to operate flights as they were willing to operate at a cheaper rate. “If they can’t make free repatriation, why aren’t they allowing other airlines to fly the Indians back?” he asks.

Many also cite India’s evacuation efforts during the Kuwait crisis in 1990 when more than one lakh Indians were airlifted free of charges by the VP Singh government.

Jabir says that the virus has hit the migrants hard as at least 25,000 workers haven’t got their salary for the last three months, and thousands have been rendered unemployed too. Though many NGOs are extending support to the people in distress, they say that the Indian government needs to chip in with adequate measures for the vulnerable community. “We won’t be able to support such huge number of people,” said a social worker. The crisis has only deepened the long standing demand to address the woes of international migrants, they say.

Social workers also point out that the Central government is turning a blind eye towards the plight of the Indians by not utilizing the Indian Community Welfare Fund (ICWF), which is meant to help Indian expatriates during emergency and challenging situations. Social activists say that the ICWF will have minimum Rs 35 crores as surplus money and lion’s share of the fund is raised from the Indian community “Has India ever faced any situation challenging than this ever? The ICWF always have surplus funds, but the embassies can’t spend the funds unless they get the nod from the MEA,” says Jabir, who is director board member of Department of Non-Resident Keralites (NORKA).

When tried to reach for clarification on ICWF, an Indian Embassy official in Oman declined to comment on Outlook’s queries.

Another social worker shared a WhatsApp request from a lady doctor to arrange tickets to go back to India. “Our clinic is closed since March 20 until further notice from the ministry. Now the building owner has asked me and my roommate to shift the room. It’s impossible to shift now, and there is no water supply from last week. We don’t have money to buy tickets as we weren’t paid salary for months,” it reads. An Abu Dhabi-based social worker says that they are inundated with such messages on daily basis.

“How will I buy tickets when I can’t even afford a day’s meal?” ask Kanwal Preet, who is desperate to return to Jalandhar in Punjab. He has been out of job for past five months and is one among lakhs, who wants the Indian government to extend financial aid to them.