In the deadliest attack on security forces in Kashmir, around 40 CRPF personnel were killed on Thursday when their convoy was targeted by a suspected suicide bomber of Pakistan-backed Jaish-e-Mohammad in Pulwama district on the Srinagar-Jammu National Highway 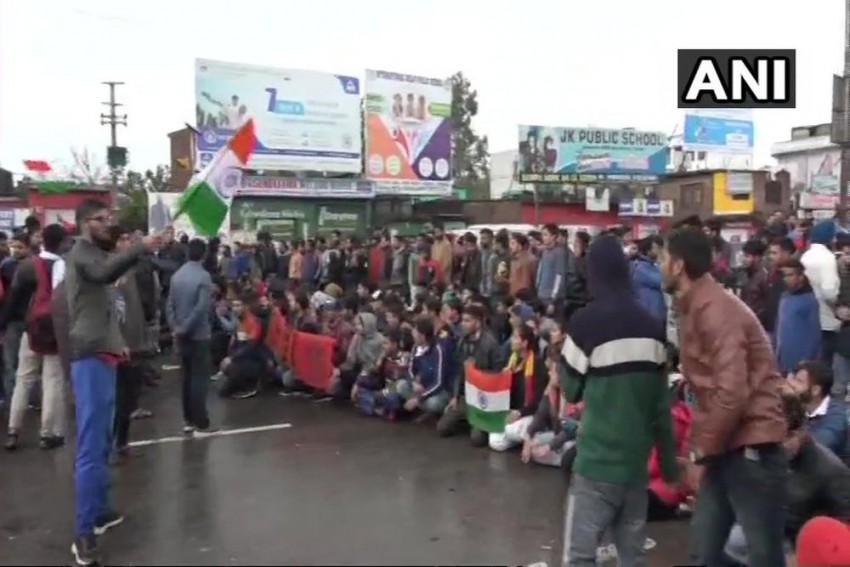 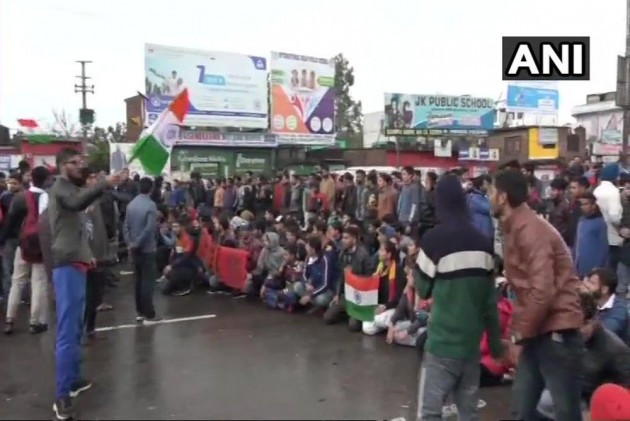 A pall of gloom descended at the homes of the CRPF personnel who were killed in the Pulwama terror attack on Thursday, even as the bereaved await the arrival of the mortal remains of the bravehearts.

While key leaders across the globe stood in support of India in the wake of the ghastly attack, anti-Pakistan slogans were raised and tributes were paid to the CRPF jawans in Uttar Pradesh.

Effigies of Masood Azhar, the chief of Jaish-e-Mohammed (who claimed responsibility for the attack), were burnt in Varanasi as a sign of protests against the killing of the security personnel on Thursday.

Protesters thronged the streets with placards that read ''Aakhir Shahadat kab tak?" (how long will this martyrdom continue) and festoons displaying various demands and needs of the Indian soldiers.

Another protest took place in Bhopal by the workers of BJP, who also expressed their grief over the loss of lives. One of the workers said, "Very painful and shameful incident. The terrorists are bred by Pakistan. We want Prime Minister Modi to attack Pakistan and teach it a lesson"

Youths in Jammu and Kashmir who protested against  the deaths of the CRPF personnel said, "We are protesting against the killing of 40 CRPF jawans. This is shameful. There should be stern action now, there should be another surgical strike."

Meanwhile, the father of Ramesh Yadav, a soldier who lost his life in the terror attack, urged the government to initiate a probe into the matter and give a befitting reply to Pakistan.

"My son came home 25 days back. We received a call from Srinagar yesterday evening. The officer on the line told us that a terror attack has taken place and they are not yet able to recover the body of my son. Each year, many soldiers are dying in India. He was the only breadwinner of the family. Now, we will face trouble in educating his child. I request the government to give a befitting reply (muh-tod jawab) to Pakistan and also start an investigation at the earliest," he told the media.

Varanasi: Family and relatives of CRPF personnel Ramesh Yadav who lost his life in #PulwamaTerrorAttack yesterday, mourns his death. pic.twitter.com/3qhjdX6bte

The father of slain CRPF constable Pankaj Yadav also said no information has been received regarding his son's mortal remains. "Till now, we do not have any information about my son's body. The officials present at the incident spot have recovered his licence, identity card and other documents. We are trying our best to get more information."

Bihar-based CRPF personnel Ratan Thakur's father too urged the Centre to give a befitting response to Pakistan.

"I have sacrificed a son in Mother India's service, I will send my other son as well to fight. Ready to give him up for Mother India, but Pakistan must be given a befitting reply," he said.

CRPF Personnel Ratan Thakur's (who lost his life in #PulwamaTerrorAttack ) father in Bhagalpur: I have sacrificed a son in Mother India's service, I will send my other son as well to fight, ready to give him up for Mother India, but Pakistan must be given a befitting reply.#Bihar pic.twitter.com/rI6cM38Agh

In the deadliest attack on security forces in Kashmir, around 40 CRPF personnel were killed on Thursday when their convoy was targeted by a suspected suicide bomber of Pakistan-backed Jaish-e-Mohammad in Pulwama district on the Srinagar-Jammu National Highway.

The convoy of 78 buses, in which around 2500 CRPF personnel were travelling from Jammu to Srinagar, came under attack at around 3.15 pm at Ladhu Modi Lethpora.

Indian Air Force C-17 will soon fly to Jammu and Kashmir's Srinagar from Hindon to carry the mortal remains of CRPF personnel.

This is the deadliest attack on security forces in Jammu and Kashmir.

Earlier in September 2016, an Army camp was stormed by terrorists in Uri, killing 19 soldiers.

Prior to that, 28 BSF personnel were killed in an attack on a convoy of the paramilitary force in 2004.