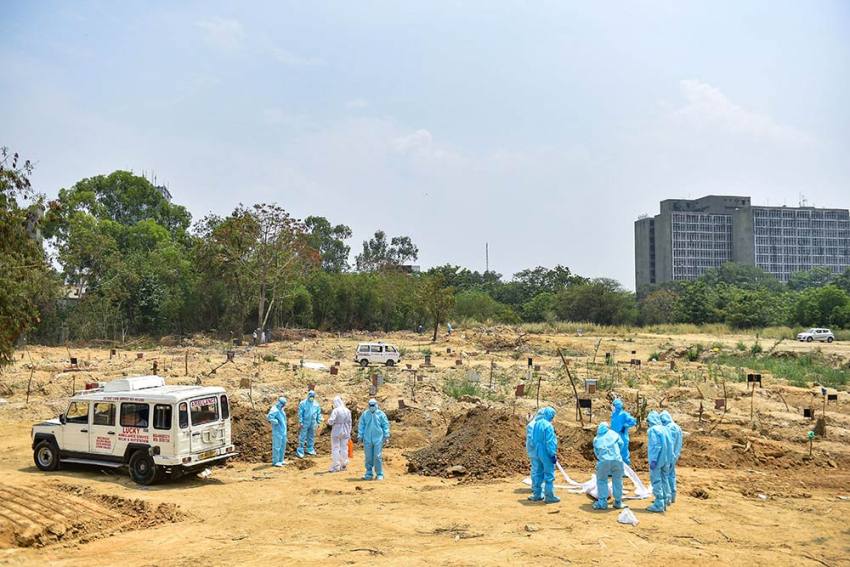 Medics and family members wearing PPE kits perform burial of a person who died due to COVID-19 at a graveyard, during the ongoing nationwide lockdown, in New Delhi.
PTI Photo
Jeevan Prakash Sharma 2020-06-22T14:45:07+05:30 Muslim Graveyards Run Out Of Space In Delhi As Covid-19 Deaths Continue To Rise 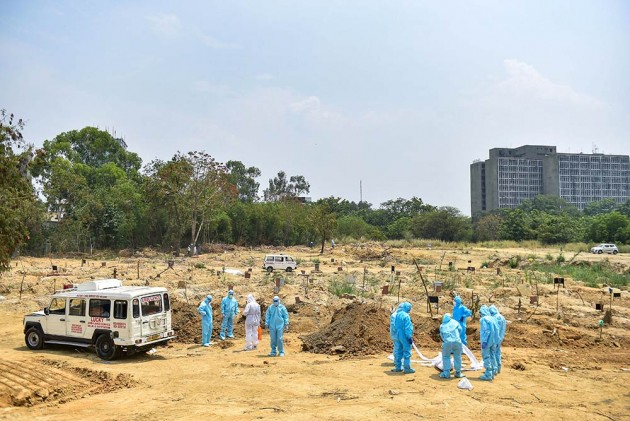 As the number of Covid-19 deaths continues to rise in Delhi, Muslim cemeteries are running out of burial space. Relatives of patients who died due to Covid-19 have complained that they had to run around to look for space to bury dead bodies.

Two in East Delhi – Shastri Park and Mulla Colony – have stopped taking bodies due to lack of space.

“The burial ground at Shastri Park has received over 100 bodies in two months. It is spread over an acre and can’t take more bodies now,” said Suleman Ali, whose NGO ‘Bhrashtachar Nirodhak Samiti’ looks after it.

“EDMC has written to LG of Delhi to ask the land-owning body, Delhi Development Authority (DDA), to give another 1-acre lying adjacent to the land to meet the growing demand, but we are awaiting the approval,” he added.

The second burial ground at Mulla Colony has even less than one acre of land. Its caretaker, Mohammad Vakil, said that the burial ground has received 17 bodies in less than a month and now it has met its capacity.

“The only way out is to redress it with smooth and clean soil and raise the ground level by a minimum of 3 feet,” Vakil said.

“Normally we dig the ground for five feet to bury the bodies. A three feet layer will enable us to restart the burial work all over again,” he added.

The three other burial grounds under SDMC are at ITO, Madanpur Khadar JJ Colony and sector 24, Dwarka.

The burial ground at ITO, oldest among all as it started in the 1920s, will soon face a space crunch according to its in-charge, Haji Miyan Faiyazuddin. “Since April 5, when the first body of Covid-19 patient came, over 350 bodies have been buried, besides 150 regular bodies,” Faiyazuddin said.

82-year-old Faiyazuddin said that though the burial ground is spread over 45 acres of land, it has been dressed up with soil several times for reuse.

The graveyard in sector 24, Dwarka is situated in an area dominated by non-Muslims.

“I have a fear that locals might raise objection to Covid-19 bodies. I have warned the municipal authorities,” said SM Khan, a retired army man and a social worker in-charge of the graveyard.

“I still have 100 sq feet free out of a total of 2.5 acres. However, I have discouraged people and the municipal authority to send Covid-19 bodies here but I don’t know how long I will be able to do it,” Khan added.

Abdul Rehman, who takes care of burial ground at Madanpur Khadar JJ Colony, said that the municipal authorities have cancelled its decision to use it for Covid-19 bodies. “We have some space but now since we don’t receive Covid-19 bodies, the pressure has increased on other burial grounds,” Rehman said.

The North Delhi Municipal body has identified only one burial ground near Avantika area in Rohini sector 1. Its in-charge, Nurul Hassan, said that the graveyard has some space left which will last for another couple of months, depending on Covid-19 deaths in coming days.

“60 per cent of the 14-acre land was already full since the last soil dressing was done six years ago,” Hassan said.

“Now, every day the burial ground receives two to three Covid bodies and three to four non-covid bodies. We can accept bodies for another three to four months at this rate but if the number of deaths increases, space might get exhausted earlier than that,” Hassan added.

Besides redressing the ground with fresh soil, many social workers, who look after these cemeteries, suggest that those burial grounds which were used by the relatives of those who migrated to Pakistan should be reused for Covid-19 bodies.

Haji Miyan Faiyazuddin seconded Khan’s view and said, “Areas like Faridabad, Sonipat, Panipat etc have such burial grounds. The crisis is right in front of us. The sooner the government realises it and take steps, the better it would be for everyone.”

Syed Mashkur Hussain, a social worker in Seelampur, says, “it is a long-pending demand with the government to provide more space for graveyards. Covid-19 has expedited the need to look for ways to sort it out.”