The prime minister said neither had he ever dreamt of being rich, nor had he committed the sin of looting money of the poor 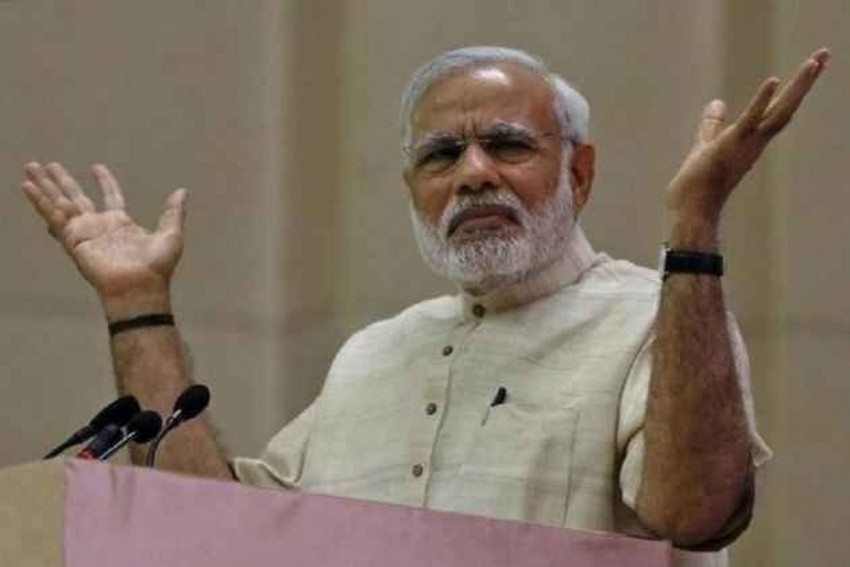 Speaking at Ballia, Modi attacked the SP-BSP, describing them as 'mahamilavati', and also slammed the Congress for questioning the courage of soldiers.
Outlook Web Bureau 2019-05-14T16:04:05+05:30 Congress, 'Mahamilavatis' Will Give Free License to Naxals, Stone Pelters, Says PM Modi 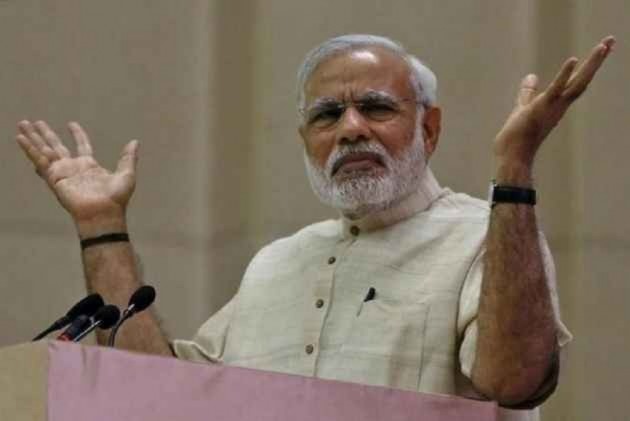 Prime Minister Narendra Modi on Tuesday threw an "open challenge" to the opposition parties to prove if he had amassed any asset or kept money in any foreign bank.

He was addressing an election meeting in eastern Uttar Pradesh’s Ballia, days before campaigning ends for the final phase of the Lok Sabha elections.

"I am throwing an open challenge to the 'mahamilawati' people that if they have guts then, instead of hurling abuses at me, they should accept my challenge.

"My open challenge to the 'mahamilawati' people is that they should prove if I have acquired any benami property, built any farmhouse, bungalow or shopping complex, or deposited money in any foreign bank, purchased property abroad or bought vehicles worth lakhs and crores," Modi said.

The prime minister said neither had he ever dreamt of being rich, nor had he committed the sin of looting money of the poor. "We accord top priority to the welfare of the poor, the honour and security of the motherland," he said.

"This is the reason that 'hekdi' (arrogance) of Pakistan and its terrorists has vanished in air. The terrorists who used to openly brandish firearms in Pakistan, are today hiding below the ground and praying for Modi's removal. Sometimes they look at the jungle, sometimes the sky, sometimes the sea.

"They remain restless and have lost their sleep...I have given a free hand to the brave hearts of the country. Hence, first the surgical strikes took place and then it was the air strikes. Today we have taken the war against terrorism across the border," he asserted.

"We are busy in cleaning terrorists and Naxals, while Congress and 'Mahamilavatis' are busy in defending them. They want to give free license to Naxals, terrorists, stone pelters and their supporters. They are on a mission to put the national security and unity to risk," he added.

Modi then attacked the SP-BSP, describing them as 'mahamilavati', and also slammed the Congress for questioning the courage of the bravehearts.

"Those who could not even rein in local goons, how will they be able to rein in terrorism. The entire world is affected by terrorism and to combat it, there is a need to have a government in Delhi which is strong, does not believe in appeasement and votebank politics and takes decisions with courage."

The prime minister was seeking support for BJP and NDA ally candidates in eastern Uttar Pradesh that go to polls in the seventh and last phase on Sunday.

Citing a recent clash between SP and BSP workers in Ghazipur, Modi said, "The workers of SP and BSP were hitting each others, hurling abuses, tearing each others clothes, and the entire country witnessed this. The elections are yet to be over, and they have started settling scores."

"The people will give a befitting reply through votes to the abuses hurled at me by these 'mahamilavati' parties," Modi said.

He alleged that the opposition leaders dabbled in caste politics and replenished their coffers, built bungalows and palaces.

On the alliance between the Samajwadi Party and the Bahujan Samaj Party, the prime minister claimed that the parties, which used to abuse each other, would again be at each other's throats the moment results were out.

"How these mahamilavati people have duped you and looted you, you know it very well. They, in the name of caste politics, have built bungalows for their relatives, palaces, acquired benami property... This is the reason that parties which once used to abuse each other, are now compelled to forge a 'mahamilawat'," the prime minister said.

Hitting out at detractors who question his caste, he said, "I am standing for the honour of mothers, sisters and daughters. I am standing to increase the confidence of the poor. I am working to strengthen the last man of the society. And in despair, the 'mahamilawati' people are asking about Modi's caste...I have been the chief minister of Gujarat for more than the combined tenure of bua-babua."

BSP chief Mayawati and SP president Akhilesh Yadav are referred to as 'bua' and 'babua' respectively.

"I have contested a number of elections and also made others contest, but never banked on my caste. I may have been born in a extremely backward caste family, but my aim is to make India a front runner in the world," he said.

"I have experienced poverty and backwardness. The pain which you are feeling now, I have myself felt it. My backwardness and I are not for alleviating my poverty, but I live for you. I toil for you, so I am confident that we will be successful in transforming this situation," Modi said.