As President's rule has been imposed on the state, all the concerned parties will have to sit with each other to decide on future strategy. Catch all the updates here 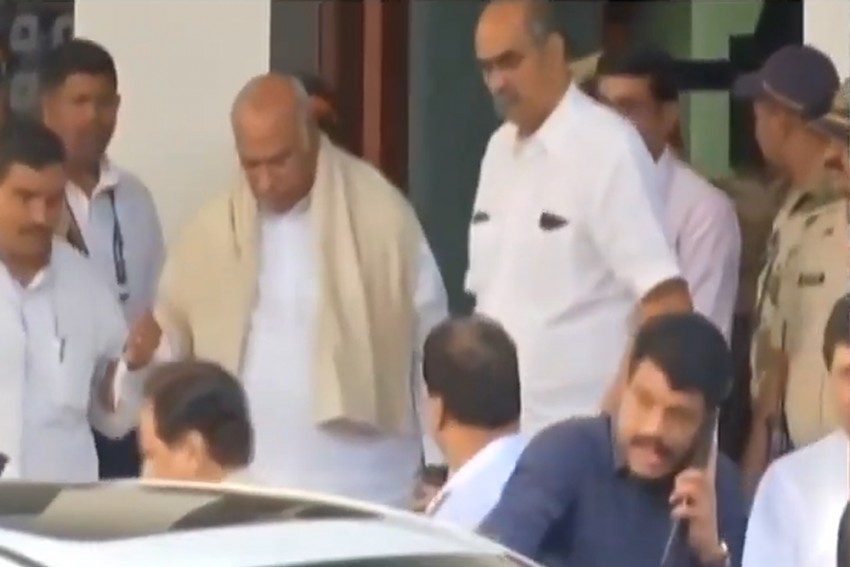 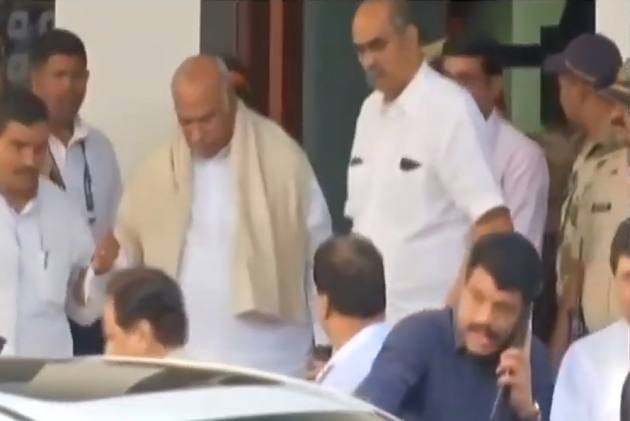 The political environment in Maharashtra is charged up. After Shiv Sena broke ties with the BJP and was invited by the Governor to indicate the willingness and ability to form the government, the party faced disappointment as it was not granted 48-hour extension to prove its numbers.

Late on Monday evening, Governor Bhagat Singh Koshyari called NCP's Sharad Pawar and invited him to indicate his willingness and ability to form the government in the state by 8:30 PM.

But later, President's rule was imposed on the state following the governor's recommendation. Now the Shiv Sena, NCP and Congress have six months to work out their differences if they want to ally and form the government.

Here Are All The Highlights Of The Day:

8: 12 PM: "I would like to thank Arvind Sawant, many people have the lust for ministerial posts but he isn't like that. We are proud of him," says Uddhav Thackeray.
Sawant had resigned from the NDA government's cabinet on Monday after NCP demanded Shiv Sena to severe ties with the BJP-led central alliance.

8:10 PM: "We are not greedy for power," says Sena chief Uddhav Thackeray.

8:09 PM: "Sena was invited to stake claim in Maharashtra even before end of deadline given to BJP," says  Uddhav Thackeray.

8:08 PM: Uddhav Thackeray said, "We have six months time...we will sit together with Congress and NCP to discuss a common minimum program and decide on government formation."
He added, "give this process the time it requires."

8:05 PM: Shiv Sena leader Uddhav Thackeray tells reporters: "When we staked claim to form government, we asked for more time. We could not provide the letters of support from Congress and NCP because they needed more clarity and after the required time the letters could have been produced."

7:52 PM: NCP Chief Sharad Pawar says, "We are in no hurry. We will hold discussions with Congress and then take a decision (to support Shiv Sena)."

7:45 PM: "The way President's rule was recommended, I condemn it. This government has violated the SC guidelines on President's rule on several occasions in the last five years," says  Congress leader Ahmed Patel.

7:42 PM: "The BJP is making fun of democracy. First, the governor called BJP, then Shiv Sena and NCP to form government. But Congress was never invited, " says Ahmed Patel.

7:37 PM: Congress and NCP have started addressing the media after a meeting following the imposition of President's rule in Maharashtra.

7:16 PM:  Leaders of Congress and NCP will hold a joint press briefing shortly.

6:58 PM: "This decision (President's Rule in Maharashtra) has been taken under pressure from Prime Minister and Home Minister, we object to this," said senior Congress leader Digvijaya Singh.

6:37 PM:  The Supreme Court registry is yet to take a call on placing the petition filed by the Shiv Sena before Chief Justice of India Ranjan Gogoi on their plea for according an urgent hearing on Tuesday itself. The party moved the SC challenging the Maharashtra governor's decision of not granting it the three days to muster numbers.

An official source told PTI that there is some defect in the petition and only after correction of those, the decision to place the matter before the CJI will be taken.

6:04 PM: A spokesperson of the Ministry of Home Affairs said, "Maharashtra Governor was of the view that it has been 15 days since the conclusion of the electoral process and none of the political parties is in the position to form a govt in the state;  President's Rule is a better option."

5:57 PM: Maharashtra government's lawyer Nishant Katnekar told ANI that he came to know about the Shiv Sena's petition today. "I will have to receive a copy of the petition, then I will have to see the prayers, contents, grounds and thereafter, appropriate steps will be taken," he said.

5:56 PM: Maharashtra Assembly to be in suspended animation, say Officials.

5:40 PM: President Ram Nath Kovind has signed the notification giving his consent to the Governor's recommendation to have President's rule in Maharashtra.

5:32 PM: Former Maharashtra Chief Minister Ashok Chavan has said the Congress party stands united with the NCP and a decision with regard to the formation of the government in the state will be taken after meeting of senior leaders on Tuesday.

4:56 PM: Shiv Sena lawyer has told Outlook that if the President's rule is imposed, the party is prepared to challenge it. "A fresh petition will be filed today itself," the lawyer said.

3:29 PM: Governor of Maharashtra Bhagat Singh Koshyari having been satisfied that as Govt of Maharashtra cannot be carried on in accordance with the Constitution, has today submitted a report as contemplated by the provisions of Article 356 of Constitution (President's Rule), reports ANI.

Sources said the Union Cabinet, chaired by Prime Minister Narendra Modi, met here this afternoon to discuss the political impasse in Maharashtra and decided to recommend to the president to impose Central rule in the state.

2:40 PM: Prasar Bharti reports that Maharashtra governor has recommended the President's rule in the state.

2:36 PM: Senior Congress leader Sushil Kumar Shinde has said that there's no issue of Congress being late. "We've been alert since the beginning. We had asked them (NCP) if they've sent a letter (to Governor). Things will have to be done simultaneously, they're our partner. Whatever decision is taken, it'll be done together," he said.

2:24 PM: Congress leader Sanjay Nirupam has said it is the "failure" of the BJP and Shiv Sena, bringing the state to the doorstep of President's rule, and now their holding Congress responsible for the instability is meaningless.

"Congress has no moral responsibility to form a government in Maharashtra. Putting any blame on us for the instability is meaningless. It's the failure of BJP and Shiv Sena which has brought the state on the doorstep of President's rule. #MaharashtraPoliticalCrisis," Nirupam tweeted.

2:18 PM: News agency ANI reports that Shiv Sena is prepared to approach the Supreme Court if the Governor of Maharashtra imposes the President's rule. It says Uddhav Thackeray has already discussed the matter with senior Congress leaders Ahmed Patel and Kapil Sibal.

2:06 PM: Amid speculation of President's rule in Maharashtra, Prime Minister Narendra Modi has called a cabinet meeting just before he leaves this afternoon for BRICS summit in Brazil.

1:34 pm: AIMIM chief Asadudin Owaisi said his party will neither support the BJP or Shiv Sena in government formation in Maharashtra. "We reiterate our stand...I am happy now if Congress-NCP support Shiv Sena, people will know who was cutting whose votes and who was colluding with whom."

"We three are going to Mumbai now and will meet Shri.Pawar at the earliest," tweeted Venugopal.

Hon'ble Congress President Smt.Sonia Gandhi spoke to Shri.Sharad Pawar today morning and deputed Shri.Ahamed Patel, Shri.Mallikarjun Kharge and myself for holding further discussions with Shri.Pawar.
We three are going to Mumbai now and will meet Shri.Pawar at the earliest.

12:14 pm: The Nationalist Congress Party (NCP) President Sharad Pawar, his nephew and former Deputy Chief Minister Ajit Pawar and other senior leaders and Legislators of the party held a crucial meeting here on Tuesday to discuss the government formation issue.

Pawar's visit to 57-year-old Raut, admitted to the Lilavati Hospital here, comes in the midst of the ongoing political drama in Maharashtra.

10:09 pm: "Whatever the decision, it will be taken collectively, so we were waiting for Congress' response yesterday, but it didn't come, we can't decide on it alone. There is no misunderstanding, We contested together and are together," said NCP's Ajit Pawar.

10:01 am: Amidst the political upheaval in Maharashtra, senior leaders of Nationalist Congress Party (NCP) and Congress will meet on Tuesday to mull on the prospects of forming a non-BJP government in the state with the Shiv Sena.

10:00 am: Left in the lurch after Shiv Sena parted ways and is making all-out efforts to join hands with NCP-Congress for the government formation, the BJP has decided to adopt a stance of "wait and watch" amidst the political crisis in Maharashtra. The party held its core group meeting on Monday to discuss the political situation.

9:50 am: President Ram Nath Kovind on Tuesday accepted the resignation of Shiv Sena MP Arvind Sawant from the Union council of ministers with immediate effect, a Rashtrapati Bhavan spokesperson said.