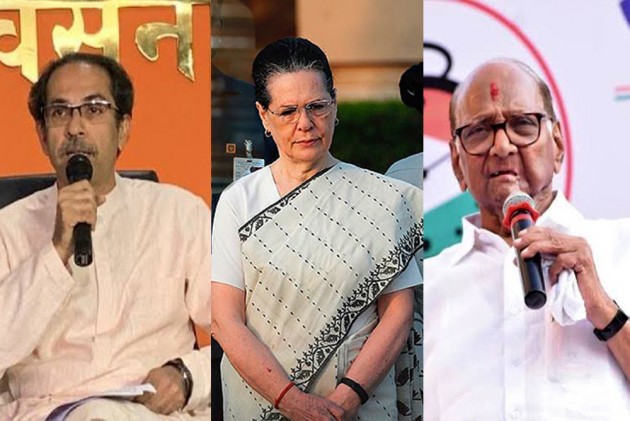 A meeting with the Congress scheduled on Tuesday to further discuss the possibility of government formation in Maharashtra was called off due to pre-occupation of Congress leaders with Indira Gandhi's birth anniversary events, NCP leader Nawab Malik said.

He said Congress leaders requested that the meeting be postponed to Wednesday.

The two sides have deputed leaders for holding talks on a possible alliance.

Accordingly Mallikarjun Kharge, Ahmed Patel and Congress general secretary K C Venugopal besides some state leaders and Praful Patel, Sunil Tatkare, Ajit Pawar, Jayant Patil of the NCP were to meet to explore the possibility of an alliance with the Shiv Sena in the state.

The Congress will hold talks with Nationalist Congress Party in New Delhi to finalise the draft common minimum programme (CMP) which will be vetted by the leadership. Kharge will lead the talks along with close Rahul Gandhi aide Venugopal and state leaders will be included, said sources.

Sources say that NCP is still pushing for the rotational arrangement for the top post but the first term of Chief Ministership is likely to go to the Shiv Sena. The deliberations on power sharing will be finalised by the high-powered committee for the three parties in this week and the final stamp will be put by the leaders of all the three parties.

As per the deal negotiated, the Congress will get Speaker's post and a Deputy Chief Minister post in the government while NCP will get post of legislative council chairman. All three parties are likely to get an equal share in the council of ministers.

The parties are negotiating for portfolios of Home, Finance, Revenue, Housing and Cooperatives in the state.

Congress is likely to pitch for Home and Revenue while NCP wants Finance and Cooperatives. The ministry of Coperatives is perceived as very important in the state as most of the sugar mills are owned by cooperative societies. Shiv Sena will get the Chief Minister's post said a senior leader.

The Congress wants finalisation of the CMP before moving forward to an official announcement. The CMP will have clear cut objectives on the issue of core agenda of Shiv Sena as Congress is apprehensive about the attitude of Sena leaders.

NCP President Sharad Pawar had a meeting with Congress President Sonia Gandhi on Monday. Pawar said if the NCP-Congress have to take a view on government formation, they have to first discuss it between themselves.

In the October 21 Maharashtra polls, the BJP-Sena saffron alliance secured a comfortable majority by winning 105 and 56 seats respectively in the 288-member assembly. The Congress and the NCP, pre-poll allies, won 44 and 54 seats respectively.

However, failing to evolve a consensus over the chief minister's post, the two saffron parties parted ways, with the Sena exploring the possibility of tying up with the Congress-NCP.