The pregnant elephant in Kerala consumed a pineapple filled with powerful firecrackers which exploded in its mouth in the Silent Valley forest. It died in the Velliyar River a week later on May 27. 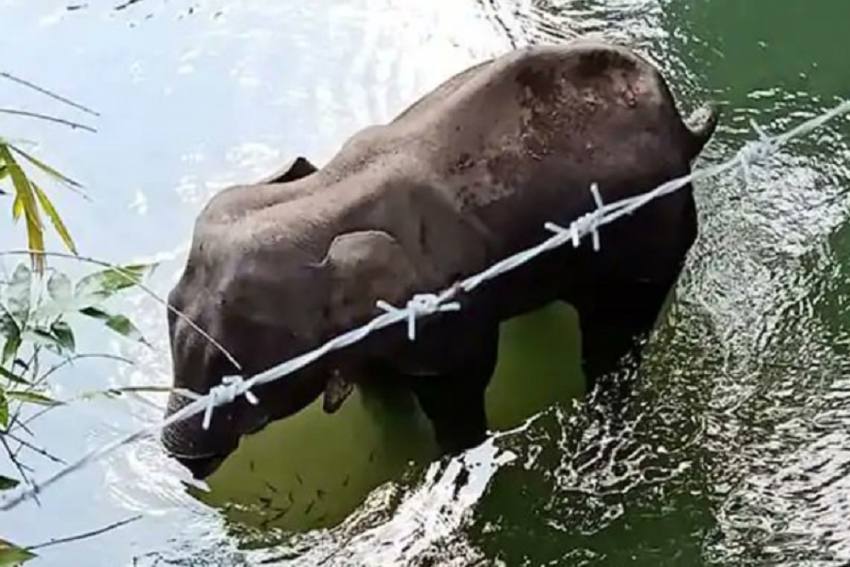 The pregnant wild elephant in Silent Valley Forest died on May 27 after a pineapple filled with powerful crackers exploded in her mouth.
Twitter Photo
PTI 2020-06-08T16:36:05+05:30 Kerala Elephant May Have Accidentally Consumed Cracker-Filled Fruit: Environment Ministry

Primary investigations into the death of pregnant elephant in Kerala has found that it may have accidentally consumed a cracker-stuffed fruit, the Environment ministry said on Monday.

The ministry also noted that many a times local resort to an illegal act of planting explosive-filled fruits to repel wild boars from entering plantation farms.

The 15-year-old elephant consumed a pineapple filled with powerful firecrackers which exploded in its mouth in the Silent Valley forest. It died in the Velliyar River a week later on May 27.

In a series of tweets, the ministry has said that one person has been arrested in the matter.

“Primary investigations revealed, the elephant may have accidentally consumed such fruit. Ministry is in constant touch with Kerala Govt and has sent them detailed advisory for immediate arrest of culprits, and stringent action against any erring official that led to elephant's death," the ministry said.

“As of now, one person has been arrested & efforts are on to nab more individuals who may have participated in this illegal & utterly inhuman act. The @WCCBHQ has also been directed to act on this matter with utmost sense of urgency. #WildlifeProtection,” the ministry posted on its official Twitter handle.

“In the meantime, MoS, MoEF&CC, Shri Babul Supriyo requests everyone to not indulge or fall prey to in any of the rumours & fake news that are being circulated in the #SocialMedia,” the ministry said.

The Kerala government and all departments concerned of the ministry are handling the matter in an unbiased manner.

“We are confident of concluding the investigation sooner than later, to be followed by exemplary #LegalActions & punishment that will act as strong deterrent to committing such future acts,” it said.

The Ministry on Sunday also held a meeting with several officials to discuss the progress in the matter.

The review meeting was held under the chairmanship of Sanjay Kumar, Director General of Forests and Special Secretary in the ministry (DGF&SS) to discuss the progress on the action taken in the case.

Besides DGF&SS, the meeting was attended by an official from National Tiger Conservation Authority (NTCA), Inspector General of Wildlife, ministry of environment, additional director of Wildlife Crime Control Bureau and scientists from Elephant Cell, an official told PTI.