A shutdown was also observed in south and north Kashmir districts where business establishments were closed and public transport off the roads. 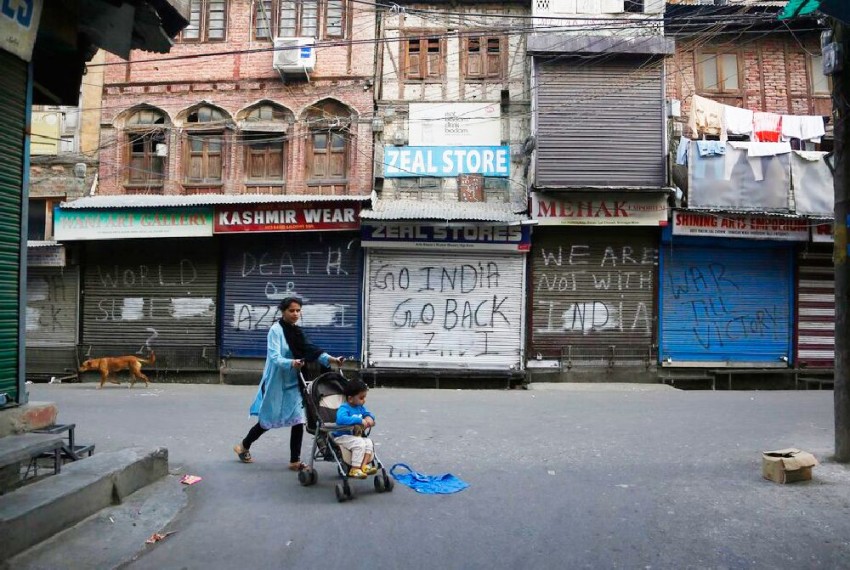 A Kashmiri woman pushed a child on a stroller on a deserted road in Srinagar.
AP File Photo
Outlook Web Bureau November 21, 2019 00:00 IST Kashmir Shuts Day After Amit Shah's 'Everything Is Normal' Remark In Rajya Sabha 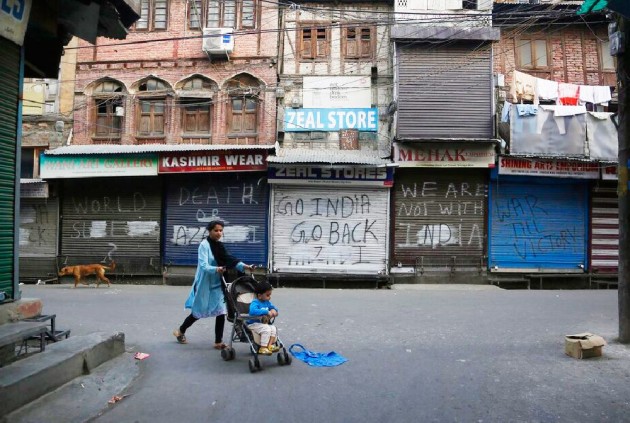 A day after Union Home Minister Amit Shah said in Rajya Sabha that everything was normal in Kashmir, the Valley observed a self-imposed shutdown on Thursday.

In Lal Chowk that has witnessed the return of hustle-bustle over the past few weeks wore a deserted look with all shops and business establishments closed.

The shutdown was also observed in other parts of the Valley including restive south Kashmir, north Kashmir and in parts of central Kashmir's Budgam and Ganderbal districts. Public transport that had resumed after three months was also seen off the roads.

Also Read: Everything Is ‘Normal’ In The Wonderland That Is Kashmir

The shutdown comes after the response of Union Home Minister to a question during the Question Hour in Rajya Sabha on Wednesday when he said everything in Kashmir was back to normal and that the administration had been successful in thwarting any violent incidents.

"Not a single civilian was killed by a police bullet after August 5," Shah said, adding that some leaders had warned of bloodshed in Kashmir after Article 370 was abrogated.

"Courts are also functioning fully. They have heard 36,192 cases and delivered orders in as many as 500 cases," he said, adding that even the Block Development Council elections were held peacefully and successfully.

Also Read: Freedom From Detention Comes At The Cost Of Silence On Article 370

Though the shutdown seems spontaneous, in absence of a call given by any political party or a separatist group, media reports said posters appeared in some parts of the Valley, warning shopkeepers against opening their establishments appeared in some areas. However, the posters had already appeared before Shah's response in the Parliament.

After Kashmir shut for more than three months following the abrogation of provisions of Article 370 that granted special status to the erstwhile state of Jammu and Kashmir, the day-to-day life began to return to normalcy gradually.

In several parts of the Valley, shops were opened in mornings and late afternoons. Public transport was also back on roads, although limited to certain routes.

Despite several efforts by the J&K administration to reopen the schools, parents did not send their children to classrooms, owing to the prevailing situation. However, the administration conducted the exams of 10th and 12th classes.

The Home Minister on Wednesday also told the Rajya Sabha that the call on restoring Internet services will be taken by the J&K administration as and when they feel the situation is apt.

Also Read: When Asked To Bend, We Turned To Kafka, George Orwell

While Shah told the Rajya Sabha that the media was functioning freely in the Valley, the journalists in Valley have held several protests in the past three months, demanding the restoration of Internet services. As of now, the administration has set up a media facilitation centre where journalists are allowed to use the Internet to submit stories and communicate with their outstation offices.

The journalists based in Kashmir have also alleged they were intimidated or assaulted by the security forces while they were performing their professional duties.