This tweeting 'normalcy' justifies everything, from abrogation of Article 370 to torture of young boys. 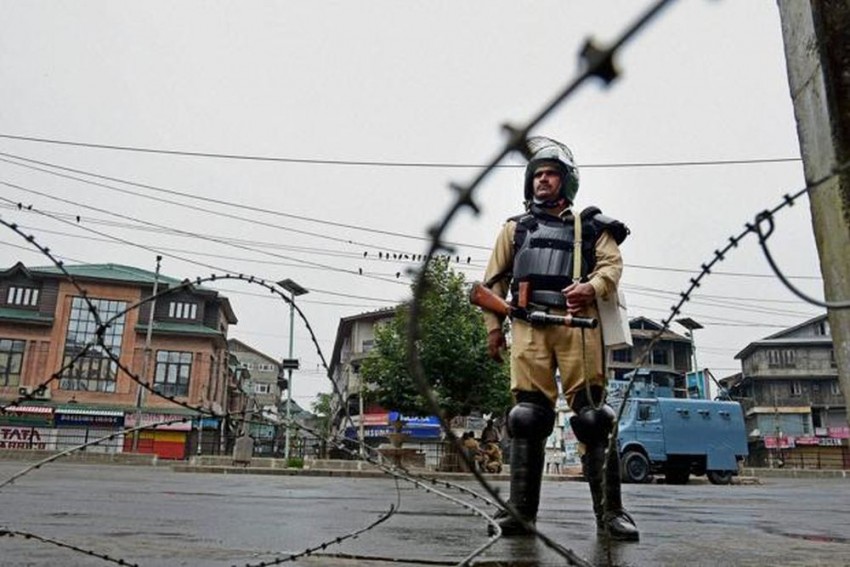 A security personnel stands guard during curfew and strike in Srinagar on Friday. (Photo: PTI)
Naseer A Ganai October 01, 2019 00:00 IST Everything Is ‘Normal’ In The Wonderland That Is Kashmir 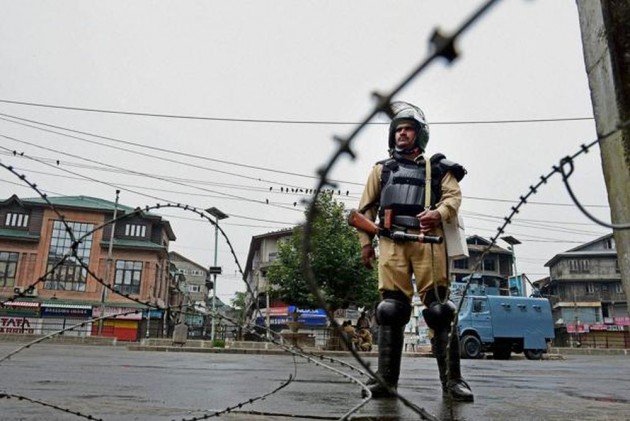 People are breathing again in Kashmir. They are walking and also talking to each other. They also, at times, appear to eat in the open. These days, any normal action of Kashmiris, like walking or driving, is deemed to be signs of “normalcy”. So much so that some people in the security establishment, and their admiring Twitterati, offer pictures of cars moving in Srinagar to underline how normal Kashmir is.

This tweeting “normalcy” justifies everything, from abrogation of Article 370 to torture of young boys. After all, the home minister, Amit Shah, has said that there are no restrictions in Kashmir; it’s all in the mind.

For the past few days, I have been looking at the internet -- a privilege -- about this “normalcy”. Imtiyaz Hussain, a police officer, posted in the security wing of Jammu and Kashmiris, leads this band of chorus singers who are singing paeans called normalcy. The cop started saying this even in the early days of the curfew after the abrogation of Articles 370 and 35A of the Indian Constitution. Since then, he has been joined by others with the chorus growing on Twitter and Facebook.

These people rebut stories of torture and beating of young Kashmiri boys by the Army and large scale arrests, published in the international press. They also have the confidence to ask editors of the New York Times and the Washington Post to believe their twitter feeds, instead of dispatches by their reporters.

A few of them comment on speeches of prime ministers of Pakistan, Turkey, and Malaysia and express their views on President Donald Trump’s Kashmir-specific tweets. It seems as if the foreign ministry operates from Srinagar. Some of them are angry with Mehbooba Mufti’s daughter, who runs her arrested mother’s Twitter account. They complain about why she had blocked them. They would rather have her welcoming the abuses heaped on her mother.

Despite hundreds of people under custody, including three former chief ministers of Jammu and Kashmir and the internet blockade has rendered lakhs of people jobless in the Valley, this band of chorus singers doesn't find anything abnormal. Even as students find it difficult to apply for courses abroad and lack of mobile phone connectivity leaves them clueless about the fate of their friends, colleagues and relatives, the band keeps on singing on the social media.

When reporters started filing stories about the medicine shortage in the Valley, the band went into a frenzy to claim otherwise. Even at present, any pharmacist at a chemist shop in the valley would tell you that there had been a 60 per cent drop in the availability of medicines. But this doesn’t affect the normalcy warriors.

They target reporters who have to take a pen drive to the media centre, which has been given a rare internet connection, to file their stories. Of course, there are reporters who do not trust this “Emailing Facility Centre” and directly visit Delhi to send their reports. Once out of the Valley, it’s practically impossible to reach word to your friends or family. But that is what normal means, doesn’t it?

Like Alice said in Lewis Carroll’s book: “It would be so nice if something made sense for a change.” In the impossible Wonderland that Kashmir has become, nothing is as it seems except to the chorus singers who are bent on carving a “normal” existence from a Mad Hatter’s worldview.