Is Kangana Ranaut poised for a political role? Her ‘outsider’ status in Mumbai, her regional identity as a Himachali, and a much closer alignment with the BJP -- all of that seems tailor-made for the next move.

Kangana Ranaut is coming a full circle. The prodigal daughter has returned not sheepishly but grandly, with the air of a princess who knows the crown belongs to her. ‘Himachal ki beti’, as her newly acquired sobriquet goes, has certainly got the adoring eyes of the people of her state on her—she has also got them wondering whether the ‘Bollywood actress’ label will suffice for too long. Is Kangana poised for a political role?

Kangana Ranaut has surely pitchforked herself into a higher orbit in the wake of the Sushant Singh Rajput episode. As she finds herself in a direct row with the Shiv Sena government in Maharashtra, a few facts about her have acquired her an extra buzz: her outsider status in Mumbai, her regional identity as a Himachali, and a much closer alignment with the BJP. All of that seems tailor-made for the next move.

It helps that she is feisty, strident, aggressive and outspoken, with a huge social media profile that she milks for her new avatar. Never one to shy away from controversies, she had already shown herself as a cut of a different cloth—taking up cudgels against powerful lobbies in Bollywood. Her stand against nepotism and the “movie mafia” is exactly what now flows into the debate over Sushant—another ‘outsider’. But Y-security from the Centre and a demolition in Mumbai have taken her far beyond the confines of that debate. She is now, clearly, the BJP’s sword-arm—and she has taken to the role with as much energy and gusto as she would pour into any film role.

Her journey from placid Himachal Pradesh to the fringes of Bollywood was just the first of her spectacular leaps from one realm to another. Her family hails from Bhambla, a Rajput-dominated village in Mandi district. Her flight from those limited horizons is a story of inspiration for girls with less privileges and lack of opportunities—but perhaps not one that many parents who now root for her would wish for their daughters to emulate. It was greatly an act of rebellion too. 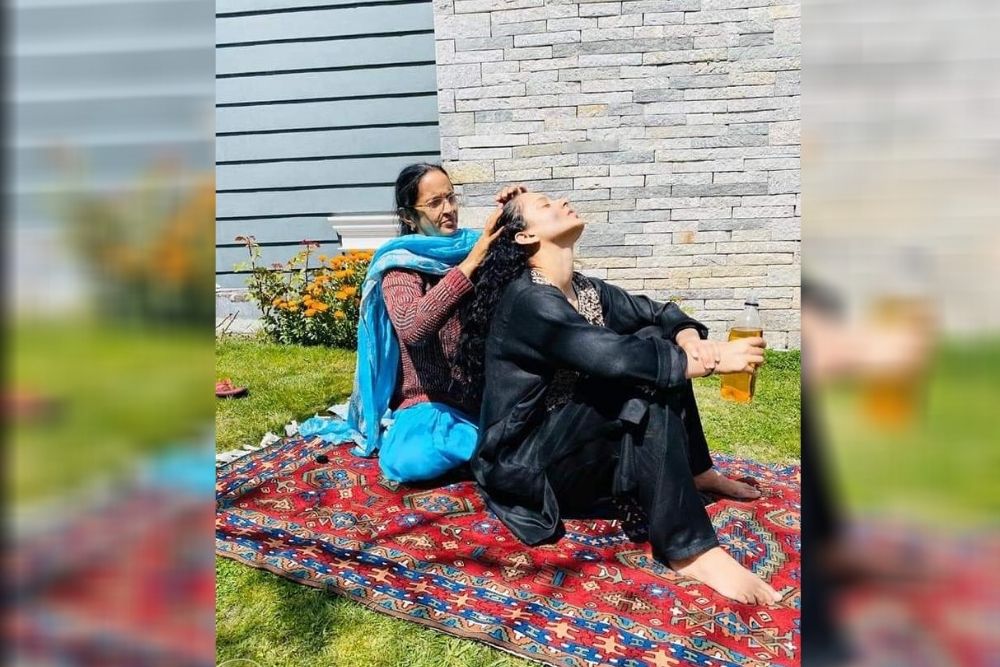 Kangana with her mother Asha Ranaut

“One can’t imagine how this girl next door, born in a simple and then not-so-well-off family, went on to rise to fame. It’s a fact that when she disclosed her plans to take up modeling, while pursuing her undergraduate studies at DAV School Chandigarh, the family declined to support her. She rebelled and the rest is history,” says Shashi Sharma, a college lecturer and neighbour.

Kangana’s early education happened at her village, in a private school; DAV School, Chandigarh, came after that. Her parents—especially her mother Asha Ranaut, a retired school-teacher—wanted her to become a doctor. Kangana had her own plans and dreams. Modelling beckoned at first, and eventually the film industry.

From the fringes of Bollywood to stardom was a mini-epic in itself…she had to fight her way up every inch of the way. Kangana faced enough odds; as years rolled by, she also got into controversies about her personal life and relationships with Bollywood stars. This did not deter her. Rather, she spoke openly about her personal affairs, instead of covering up, as many stars do. “This is a quality which only a few possess. She was also ridiculed openly for her Pahadi accent. Yet, all this never deterred her,” says Shashi Sharma.

Kangana herself plays up her attitude. In one of her TV interviews, she admitted being a “stubborn and rebellious” child. “If my father gave my brother a plastic gun and got a doll for me, I would not accept that. I questioned the discrimination,” she said. 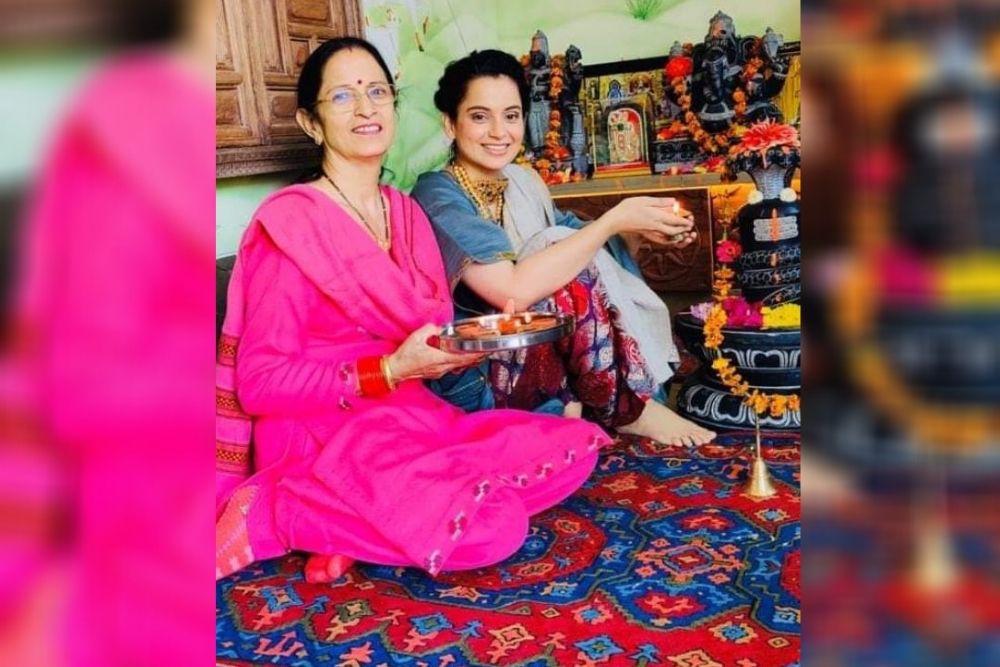 Kangana with her mother Asha Ranaut

Rebellion was not the only thing that came early to her—ambition wasn't absent either. The young Kangana perhaps had clear dreams about being a wealthy girl too. Once she did not like her grandmother objecting to her demand for a bigger family car (they had a Maruti 800). She declared to her, "Amma, let me grow up, people will see the world's most expensive luxury cars around me. And I'll have palatial bungalows to live in," recounts Sharma.

Back home, politics was always in the air—except, its flavours were different. Her great grandfather, Sarju Singh Ranaut, a freedom fighter, was Congress MLA from Gopalpur twice. That connection seemed to survive when, in 2015-16, the Congress government headed by Virbhadra Singh wanted to make Kangana Ranaut an international brand ambassador for the state’s tourism. The idea was floated by former minister Major (Rtd) Vijai Singh Mankotia, who was then chairman of HP Tourism Board. She too was initially willing to take up promotional ads but things did not work out.

Her father Amardeep Singh Ranaut, a businessman, still lives in the ancestral village. “My daughter is fearless from childhood. She never hesitates to speak the truth. This time, she has 96 per cent of India standing by her, besides all the overwhelming Himachali sentiments,” he says. He refuses to speak much on perceptions gaining ground about her posturing as someone playing the BJP’s game. “It’s not so. She had threats from the Shiv Sena, even others. We have only thanked home minister Amit Shah and CM Jai Ram Thakur for providing her security,” he told Outlook over the phone. 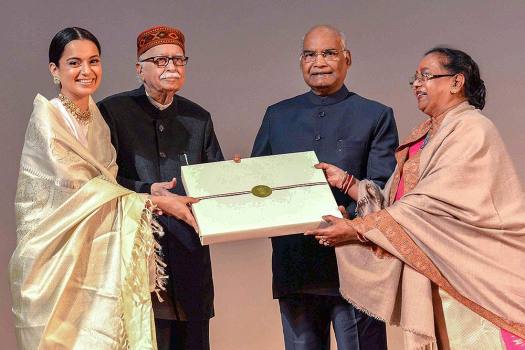 Major Mankotia, who is also president of the Indian Ex-Servicemen League, backs those sentiments. “She has exposed the drug mafia, so this Himachal ki Beti is being victimised and harassed. Himachal is dev bhoomi and veer bhoomi, we will go to any extent to save Kangana’s honour,” he says.

Locals clearly admire her for being a person connected to her roots, despite her three national awards and a Padma Shri—and the flow of political identification is quite natural too. “Her success has not taken her away from her village roots. Kangana is a devoted Hindu, practises all religious rituals. She got a beautiful temple built near the village and makes it a point to visit it on every trip, also organising puja,” says Col (Rtd) Inder Singh, local BJP MLA and family friend. “She has brought so much pride to the state, inspired many girls. She talks tough, and has spoken against the exploitation of young girls and youth. This has annoyed the nepotistic movie mafia. The Shiv Sena-led government is only acting out of political vendetta,” he asserts. 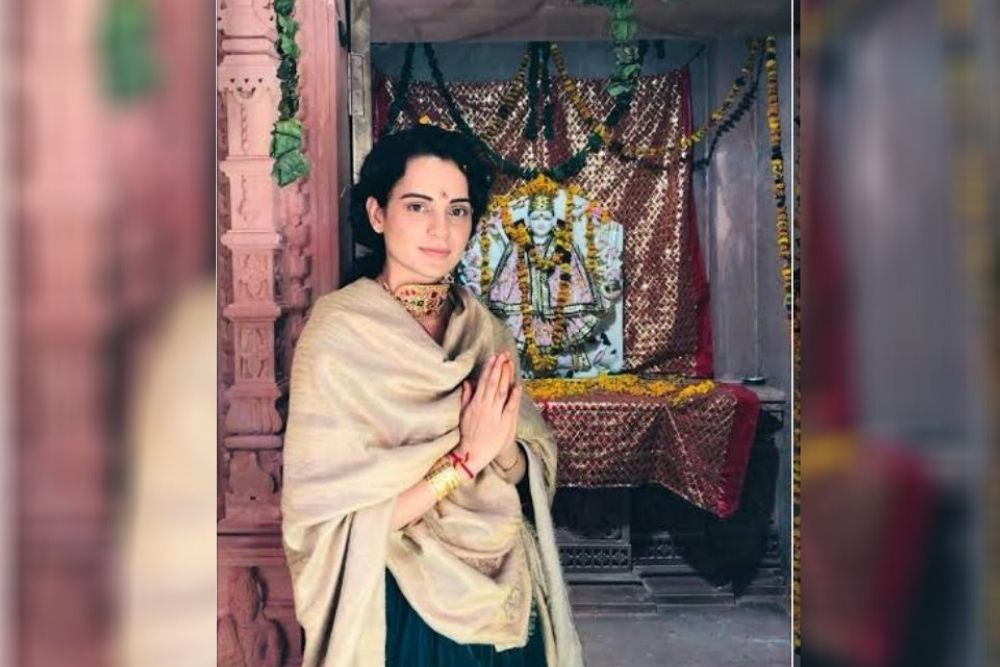 Kangana Ranaut at a temple in her village in Himachal Pradesh.

The bulldozing of her office in Mumbai created such waves in Himachal that the state BJP Mahila Morcha chief Rashim Dhar Sood threatened to raze Congress general secretary Priyanka Gandhi’s bungalow in Shimla—a threat that Chief Minister Jai Ram Thakur quickly disapproved of. “Because Kangana Ranaut is Himachal’s daughter, such anger is not unexpected. But neither the government nor the party approves of such a statement,” he added.

On whether the BJP plans to rope her into politics, Thakur merely said: “It’s something our high command decides. I can’t comment. I can only say the Shiv Sena government and its leaders have acted with political vendetta. She is our daughter, we will stand by her.” 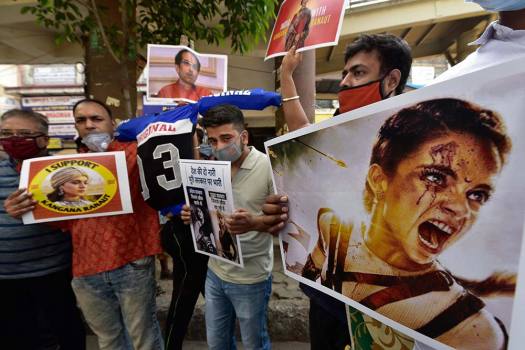 Kangana is not the first Bollywood star from Himachal Pradesh. Preity Zinta comes from the Jubbal-Kotkhai area, the apple belt around Shimla district. Preity’s maternal uncle, Jaswant Chajta, who is also district Congress president (Shimla rural), admits Kangana is a fine actress who has touched the hearts of the people, and certainly a daughter of Himachal. “My personal view is that it’s also important that she must not become a tool of a political organisation. What the BMC did to her is unfortunate, and hurt Himachalis. But politics, or becoming a political tool, should not be a recourse,” he says. Speaking to Outlook, he recalls that Preity Zinta too was lured by both the BJP and the Congress to fight elections but she declined.

For Kangana—who spent the entire lockdown in Manali, where she has built an independent bungalow—the journey seems to flow logically, unlike with Preity. Indeed, it was films with a political edge that gave her profile a political persona. After Manikarnika: The Queen of Jhansi, Kangana could be seen openly playing her Rajput roots on social media. The script, the set…everything seems set for lights, camera and action.