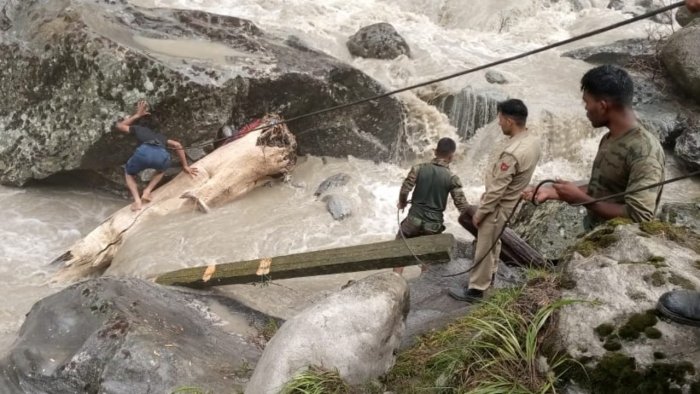 In a bid to help the cloudburst-hit village of Kishtwar district, the BJP unit of Jammu and Kashmir on Saturday released relief material as the ongoing rescue operation to trace 20 missing persons entered the fourth day.

J-K BJP president Ravinder Raina and other senior party leaders flagged off a mini-truck loaded with essential commodities, including flour, rice, sugar, oil and pulses besides blankets, medicines and other daily-use items from the party headquarters.

"BJP workers and civil society contributed the relief material for the affected people as a humanitarian aid," Raina told reporters.

Seven persons were found dead and 17 others rescued in an injured condition after the remote Honzar village in Dacchan tehsil was hit by flash floods triggered by the cloudburst in the early hours of Wednesday, damaging 21 houses, 21 cow sheds, a ration depot, a bridge and a mosque.

At least 20 people, including nine women, are reported missing from the village and a joint rescue operation by the police, Army, National Disaster Response Force, and local volunteers is underway.

"Success has eluded rescuers so far as the missing persons are believed to have been washed away in the flash floods triggered by the cloudburst," an official said.

The senior BJP leader expressed solidarity with the victims of the cloudburst and said the party stands with the distressed families at this difficult hour.