Junior doctors in West Bengal are on a strike since Tuesday after two of their colleagues were attacked and seriously injured at the NRS Medical College and Hospital in Kolkata. 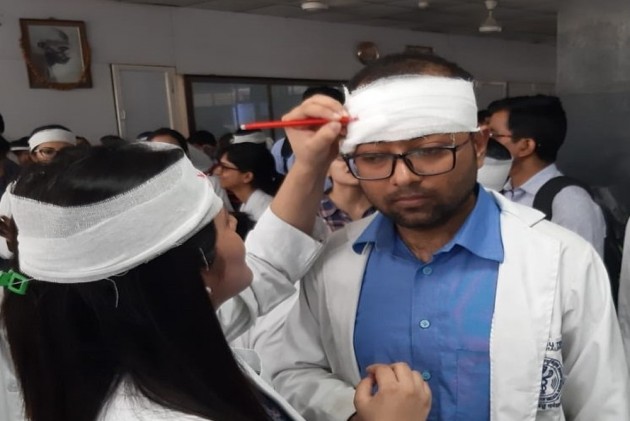 Scores of doctors in Delhi and Maharashtra have decided to boycott work on Friday to express solidarity with their protesting colleagues in West Bengal.

Resident doctors at the All India Institute of Medical Sciences (AIIMS) and Safdarjung Hospital in Delhi were seen wearing bandages on their heads in a symbolic protest on Thursday and called for suspension of all non-emergency services, including OPD, on June 14 to protest against the violence in Kolkata.

Junior doctors in West Bengal are on a strike since Tuesday after two of their colleagues were attacked and seriously injured at the NRS Medical College and Hospital in Kolkata.

Speaking to news agency ANI, Prashant Chaudhary, President of MARD at Scion hospital, said: "The incident was clearly a targeted assault. This has now become a law and order issue. We express solidarity to the seriously injured doctors. We will abstain from providing our routine services from 8 am to 5 pm today, but at the same time we will make sure to inform the administration so that Outpatient Department treatment (OPD), Operation Theatres (OT) and wards keep running."

Condemning the violence in Bengal, the AIIMS Resident Doctors' Association (RDA) has also urged all the RDAs across the country to join the token strike.

"There is a complete breakdown of law and order, with reports of mobs attacking doctor hostels with weapons. The government has failed to provide protection and justice to doctors.

"The AIIMS RDA condemns this in words and in spirit. Residents across the country are deeply hurt by these turn of events," the RDA said in a statement.

The Indian Medical Association (IMA) has asked members of all its state branches to stage protests and wear black badges on Friday.

Striking junior doctors in Bengal refused to end their stir till they are provided adequate security in government hospitals and defied a deadline set by Chief Minister Mamata Banerjee, who alleged that opposition BJP and CPI(M) were instigating the protesters as part of a "conspiracy" and giving communal colour to the issue.

In a Facebook post, the chief minister highlighted the plight of patients in hospitals due to the ongoing strike and claimed the government was cooperating with doctors.

She described the injuries sustained by the two junior doctors at NRS Medical College and Hospital as "unfortunate".

Five persons have been arrested in connection with the incident, Banerjee said, adding that an inquiry has also been ordered to look into complaint of negligence during treatment, resulting in the death of the patient.

Union Heath Minister Harsh Vardhan condemned the violence against doctors in Kolkata and urged patients and their attendants to exercise restraint. He said he will take up the matter of doctors' security with all chief ministers and asked the doctors to ensure that essential services to the people are not disrupted.