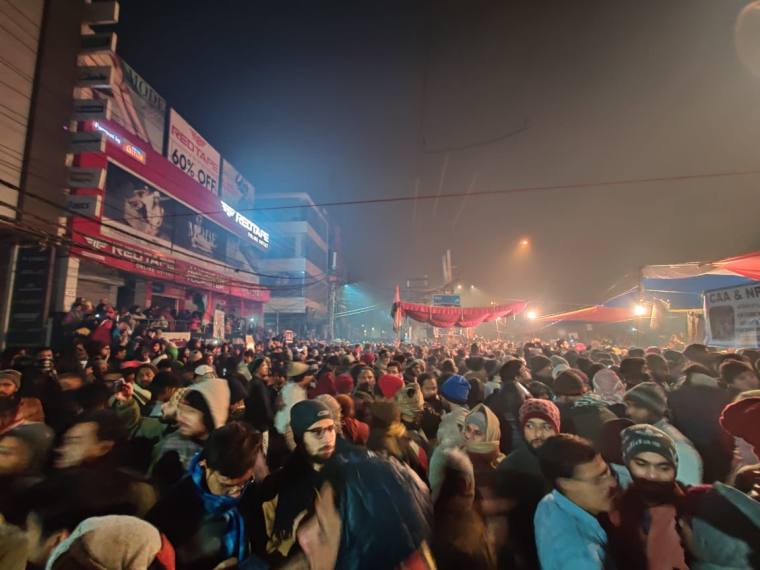 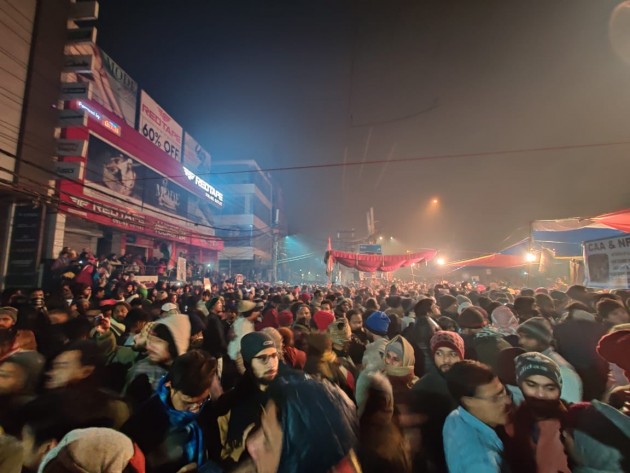 Thousands of people, braving the cold and abandoning the New Year parties, gathered at Delhi’s Shaheen Bagh on Tuesday night and welcomed 2020 with the National anthem and slogans against the Citizenship Amendment Act.

Many people roamed around the venue and thronged kiosks for tea to bear with the winter chill, while many more stayed put under the tarpaulin shed listening to speakers taking the stage one by one.

Several roamed around waving national flags while others displayed creative placards against the new law and chanted "Aazadi, Aazadi".

As the clock struck 12, the protesting crowd burst into a cheer to greet the fellow protesters the new year, and moments later broke into the national anthem in unison which was followed by the slogan "Inquilab Zindabad".

Amid the thousands was a group of young working professionals who had come in from various parts of Delhi, skipping party invitations to usher in 2020.

"Of course, I would have been celebrating all through the new year's eve had the situation been normal," a 30-year-old man, who works in a private firm, said.

As the clocks hit 12, it was a moment of goosebump at #ShaheenBagh where a crowd of 20-25k+ welcomed the #2020NewYear by singing the #NationalAnthem . This is how we said Happy New Year. #Welcome2020 pic.twitter.com/by2myWKx6k

Asked for his name, the man requested anonymity and added, "I don't want me being here to be identified with any religion. It's for a bigger cause, it's to oppose the Citizenship Amendment Act and the National Register of Citizens."

A city-based artist, who identified herself as "Phool Kumari", used the platform to also protest against the arrests of some artists in south India who were held by the police over their anti-CAA kollams recently.

"We are living on Orwellian reality. Absurdity is the new normal. Government is using its brute force at wrong places. Arts, and protests, in general, should not be held against the citizens," the 26-year-old artist said.

Local men and women too remained at the ground well past 12, in solidarity for the cause they said was the "most important now".

"Otherwise we would have watched TV at home," a woman said requesting anonymity.

Shaheen Bagh, near Jamia Millia Islamia, has been a protest venue for a section of people opposed to the CAA and the NRC since December 15.

Besides Delhi, protests have been witnessed across the country over the contentious law.