Maharashtra BJP leader Pankaja Munde said the BJP was free to decide on her continuance in the party. 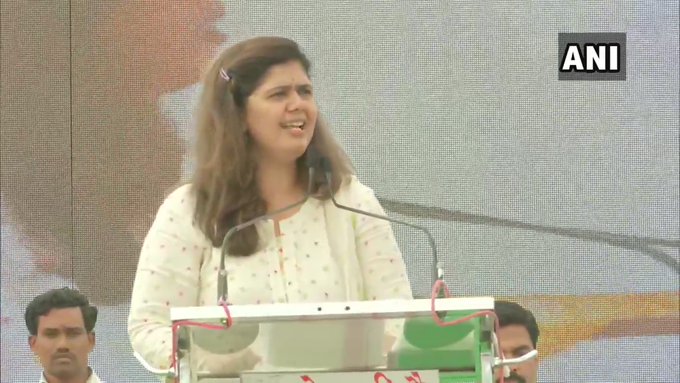 Maharashtra BJP leader Pankaja Munde on Thursday rubbished rumours of her leaving the party, but made her disappointment clear by announcing that she will no longer be a part of the state core team.

At a show of strength organised by her supporters to mark the 70th birth anniversary of her father, the late Union Minister Gopinath Munde, who passed away five years ago, Pankaja said the BJP was free to decide on her continuance in the party.

"Loss of one election does not bother me. Circumstances are being created that I should quit. But I am not going to leave the party. However, if the party wants to 'leave' me, it can take a decision," she said.

Pankaja recently wrote on Facebook stating that in the changed political scenario there was the need for her to see how she could chalk her path ahead and serve her people.

She skipped the state BJP core committee meeting in Mumbai On Tuesday. On Thursday, she said there was no point in being a member of the core team in absence of 'democracy'.

Pankaja said she was not angling for the post of state party chief or Leader of Opposition, but certain persons were creating a situation to push her and others like her out of the BJP.

"I am being labelled as 'ambitious' who tried to 'pressurise' the party. Some are spreading the rumours that I want to be the Chief Minister. I never uttered any such thing. But is it wrong to be ambitious? Can't a woman lead the state," Pankaja demanded.

"I served as a minister for five years, but I am no longer a minister, not even a legislator, nor a corporator. From today, I am not even a part of the (BJP) Core Committee. They call me a rebel. Do you think (India's) Independence would have been possible without defying the authorities or revolting," she asked.

She said she will be holding a statewide 'Mashal Rally' across Maharashtra starting from January.

Speaking at the rally at Gopinath Gad she said, "I am starting a statewide Mashal Rally in Maharashtra from January next year. I will start my work through the Gopinath Munde Pratishthan from Mumbai office on January 26."

"I will hold a day-long hunger strike in Aurangabad. This will be not against any party or individual. It will be a symbolic hunger strike to attract the attention of the leadership towards the issues of Marathwada.

The BJP's Lotus symbol and PM Narendra Modi's pictures were missing from event banners at the venue.

Dismissing rumours that she was quitting the BJP, Pankaja said rebellion was not in her blood.

Pankaja said her Facebook post was discussed more than her entire tenure as the state cabinet minister.

"I expect the BJP leadership to find out who accelerated media debates of me leaving the party," she said.

"The BJP was earlier a party of the few but was later accepted by majority of people in the state. This was the contribution of my father Gopinath Munde. Hence I say that this party belongs to my father. If this party is again going into hands of the few, why should not I speak," she said.

The decision on who will be the chief minister was already announced and I had also agreed to it. Till the last day of the poll campaign I tried in every possible manner to win each and every seat to help increase the party's power.

After doing all this work for the party, news was spread that I will revolt. The party must think on this seriously and find out who is the culprit behind this," Pankaja said.

Speaking at the rally, senior BJP leader Eknath Khadse said he worked for the growth of the party since the last four decades. "But today the party is creating an environment that we should leave it. This is not a good situation and is not acceptable by Maharashtra," he said.

Khadse said he was instrumental in making Fadnavis the president of the BJP state unit after Gopinath Munde's nod. "Even after this, Pankaja, Gopinath Munde's daughter, lost the Assembly election from Parli," he added.

Taunting Fadnavis, Khadse said that during the latter's three-day stint as the CM, he sanctioned work on memorial of Gopinath Munde in Aurangabad, which was pending for five years during his first stint as the CM.

Khadse alleged that there was a conspiracy behind the defeat of his daughter Rohini and Pankaja Munde in the Assembly elections.

"My victory in the Assembly elections was sure, but I was denied the ticket. On the contrary, my daughter was not interested in fighting the polls but was forced to contest," he said.

Ahead of the state polls, the BJP denied tickets to several ministers and sitting MLAs.

Khadse said those who worked for BJP's growth over last few decades were now sidelined in the party. "Such people are also being insulted by the party," the OBC leader alleged.

"The BJP was once ridiculed as the party of upper castes and traders, but it was Gopinath Munde who worked hard and attracted people from the Other Backward Class to the party," Khadse said.

State BJP president Chandrakant Patil said disgruntled leaders shouldn't use words which will hurt other leaders. "In this case, the person was wrong and not the party," he said, in a bid to assuage supporters of Pankaja Munde.