Hope? None At All But We Stay And Fight, Say Farm Leaders 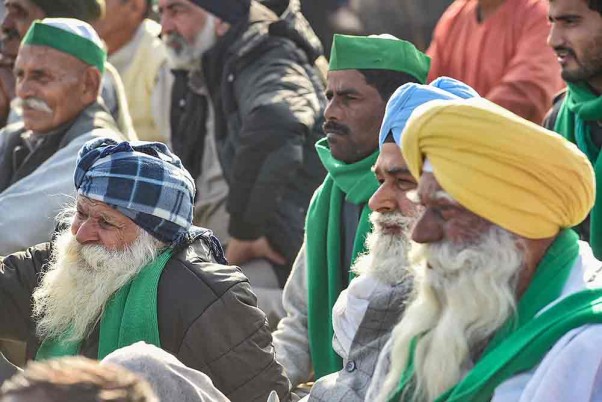 Pledging to intensify all aspects of their movement, farmers Wednesday issued their brethren a call to mobilize in great strength for Republic Day Farmers Tractor Parade in Delhi ahead of which plans are afoot to celebrate the Mahila Kisan Diwas (January 18) with protest marches to the governors’ offices in AP, Telangana, Kerala, Maharashtra and Odisha over the next fortnight.

After long discussions, All India Kisan Sangharsh Coordination Committee (AIKSCC) stated that the central government has totally failed to justify the need for the new laws. “Its logic of technology upgrade, capital investments, value addition, growth come to naught with the enactment of these Acts which give legal rights to the big corporate” and will help promote their interests and not farmers. Besides formulating plans for intensifying the agitation, farmers burnt copies of the new laws at several places across the country.

Here is what some of the prominent farm leaders had to say about the central government action and the Supreme Court (SC) order for setting up a committee to study the farmers’ grievances and give its report in two months. The farmers are, however, clear that their future lies in continuing their peaceful agitation and are not hopeful of any favourable outcome given the government’s current stance and failure of talks held so far.

Talks The Only Way Out: Junior Agriculture Minister Ahead Of Jan 15 Meet With Farmers

Punjab: Protesting Farmers Burn Copies Of Agri Laws On The Occasion Of Lohri

There is no question of farmers withdrawing or stopping the agitation which started based on the understanding that the three farm laws spell the death knell of farming. There is no change in perception given the government actions which is akin to serving poison and the farmers realise they will die if it is partaken. But the government is continuously trying to impose the new laws which are pro-corporate and anti-farmer. We are not fighting for change in any line of the acts but the new laws as a whole. We have been agitating for last seven months and did not suddenly rake up the issues. We are not forcing or enlisting people to join our protest as everyday thousands of people are arriving or leaving to go back to home and work. The most dangerous thing in the SC order is the question whether farmers from Punjab have Khalistani links.

The farmers will not withdraw their agitation as the SC is speaking the language of the central government. The members of the committee being formed by the government have already stated their position in favour of the farm laws and corporatization of agriculture so why will they support or strive to understand the apprehension of farmers? This is an agitation of not one or two farmer groups but of over 500 groups from different parts of the country. The SC action has eroded the trust of the farmers, who were already upset with the government's show of listening to their demands.

The central government action in seeking legal recourse to bail it out instead of resolving the farmers’ issue has further eroded its credibility. Earlier, there was trust that the issue would be resolved between the government and the farmers through dialogue. Now the SC has added another dimension to the issue by seeming to act on behalf of the government to placate farmers and push them to return home. This will, however, not work as it is not a political or leaders’ agitation but farmers’ agitation. They are firm in their demand for repeal of the three new farm laws and making MSP mandatory.

It is unfortunate that the committee proposed by the SC has people who are known to be pro-corporate, pro-market reforms, and were part of the drafting panel for the new laws. The SC has no mechanism or specialists that would ensure a fair appraisal of the issues being raised by the farmers. A proper committee representing the government, the farmers favouring the laws and those opposing them and agriculture experts should have been formed with a retired SC judge chairing it. Now there is no way farmers opposed to the laws will be able to present their views to the committee.

There is no change in farmers’ plans to continue with the protest, in fact we have chalked out plans to intensify it. to demonstrate our resolve, we celebrated lohri by burning copies of the farm laws. Though the SC has urged that women should not be participating, we have decided that Mahila Kisan will participate in the protests with greater gusto. The plans for the farmers’ parade where ever possible across the country on Republic Day will be held without any disturbance to the official ceremonies.

The SC order was on expected lines as the government has been very keen to shift the responsibility of the negotiations to some other forum. The petition to the SC had originally been for eviction of protestors but instead SC decided to mediate, making farmers reluctant participants in the court proceedings. In principle, farmers were against judicial intervention. It is odd that an expert committee of players who helped formulate the three contentious laws have been appointed to become referees and resolve the farmers’ agenda.