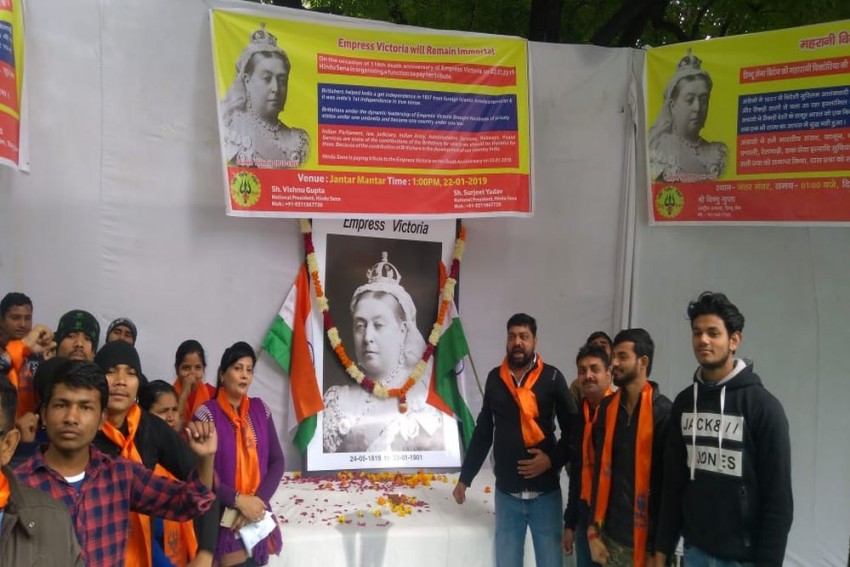 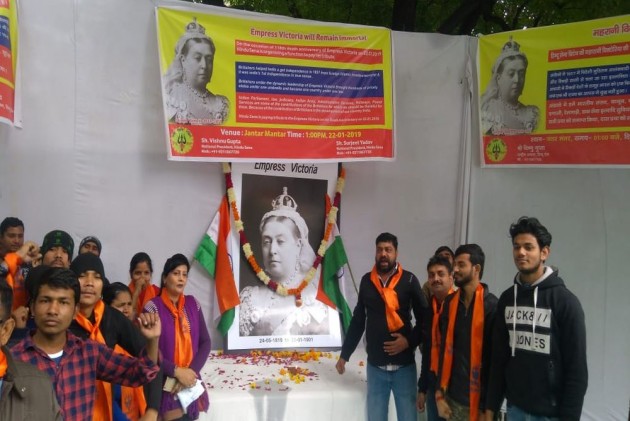 Hindu Sena, a right-wing group, often in news for bizarre protests and nationalistic grandstanding, on Tuesday organised a function to "pay tribute" to Empress Victoria of Britain on her 118th death anniversary.

When reached for comment, Vishnu Gupta, the president of the group told Outlook "we are commemorating Empress Victoria's death anniversary because, in 1857, she got India it's first independence from Muslims. That time it was Bahadur Shah Zaffar's rule"

"Then in 1860," says Gupta, "a law was made, which gave equal right to women and all Indians, and we all follow the law till date." The law Gupta refers to is the Indian Penal Code which came into force in 1862 under the Britsh colonial government.

"Even before that, we were being ruined. Many people looted us, but no one made a law for us and nobody gave equal rights to us," says Gupta without any hint of irony in his tone, when asked about the atrocities of the British rule in India.

Then, as if in a bid to neutralise the farcical theme of the event, Gupta adds, "I criticise the British for some wrong thigs they did, like the Jallianwala Bagh (massacre), such things shouldn't have happened. We condemn that. But the law they gave, today, the whole of India runs as per that."

All of what he said also forms much of the text of the press release the group is giving out.

Listing all the above points and more, Gupta, as per the release, questions "how we can call the rule of Britishers as slavery"?.

Surjit Yadav, the national vice-president and spokesperson of the group asserts the Britishers as the true patrons of development in India and in effect seems to credit the British for ushering democracy in India.

In the press release, he declares "after partition of India Congress and Communists have been teaching wrong history to us because Britishers knew if true history would be taught no one would vote for Congress."

In January 2016, Gupta was arrested by Delhi Police in connection with the vandalism of Pakistan International Airlines office in Delhi by the members of the Hindu Sena.

The members also left pamphlets which said,"There should be no talks with Pakistan unless they take stern action against people who have caused damage to India and hand over people like Dawood Ibrahim and Hafiz Saeed to India."

The incident prompted Islamabad to take up the issue with the Ministry of External Affairs.

Yet again in April 2016, the group was in news for threating to disrupt a music launch event of a film starring Pakistani ghazal maestro Ghulam Ali.

Gupta, meanwhile, had claimed the film was "anti-Hindu" and sought cancellation of its music launch. "We have decided to protest against it," he had said.

In June 2017, high drama was witnessed at Sitaram Yechury's press conference, where two Hindu Sena activists were hauled by the police for heckling and allegedly trying to manhandle him.

The two men entered the premises of the building where the press conference was going on, and tried to barge in chanting slogans against Yechury and also shouted 'Bharat Mata ki Jai' slogans.