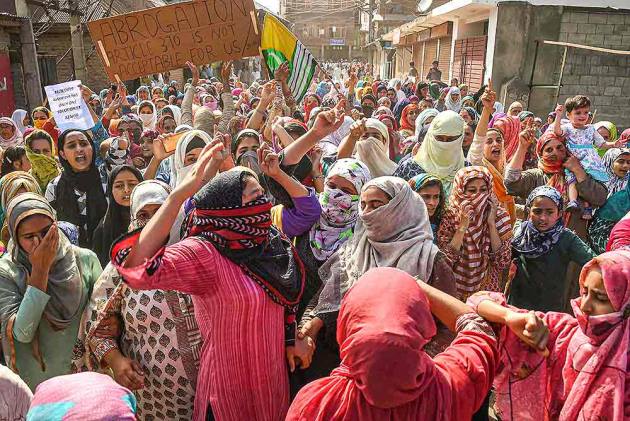 For the first time since the abrogation of Article 370 eight months ago, National Conference on Saturday described the removal of Jammu and Kashmir's special status and downgrading the state into a Union Territory as subjecting people to a mental trauma.

The party accused the government of India of reducing Jammu and Kashmir to an "experimental territory".

“It is high time that centre stops flirting with J&K and its laws and restore the democratic process long due. New Delhi has already demeaned J&K to the hilt. From abrogation of Article 370 to reducing it to a UT, people have been subjected to agony, mental trauma and an unending cycle of worries about themselves and their children,” NC spokesman Imran Nabi Dar said. He added that from having a constitution that protected the state, its people, and their welfare and rights, Government of India (GoI) has reduced J&K to its experimental territory.

Article 35A empowers the government of J&K to define a class of persons as constituting “permanent residents” of the erstwhile State. Also, it allowed the government to confer on these people special rights and privileges with respect to matters of public employment and acquisition of immovable property in the State.

On April 1, after eight months of abrogation of Articles 370 and 35A, the BJP government has notified a law spelling out domicile of Jammu and Kashmir and also who is eligible for employment in the region.

The NC termed the amendments to domicile law as “another example of central governments toying around with J&K and its people, and a move bereft of any guarantee against demographic changes here.”

Under the new law, the domiciles have been defined as those who have resided for a period of 15 years in the Union Territory of Jammu and Kashmir or have studied for a period of seven years and appeared in Class 10th /12th examination in an educational institution located in J&K. The government has reserved jobs for fourth class government position for domiciles of Jammu and Kashmir. However, after opposition from Jammu, the Centre has on Friday night made amendments in the law and reserved all jobs for domiciles of J&K without changing the definition of domicile.

“Instead of directly applying for the job, the non-state subjects will first be doled out a domicile certificate and then the job,” Dar said.

The party said the provision of keeping domicile for anyone staying in J&K for 7 years and above has already accommodated lakhs of non-state subjects here. “There is not an iota of doubt that domicile law will change the demography of J&K and will essentially rob the rights of locals to jobs,” he said.

“The silence of GoI over land rights in J&K is suspicious. Domicile Law is mute on the protection of land rights as there is nothing in the notification that offers protection to original subjects of J&K.

“Will J&K need to do another round of ‘begging’ before New Delhi does a ‘favour’ of speaking out on this concern?” he asked.