Healthcare Services Take Hit In Delhi, Goa, Kerala And Other Parts As Doctors On Nationwide Strike

The Indian Medical Association (IMA) had called for a nationwide strike against rising attacks on doctors at the hands of families of patients who fail to recover or pass away during treatment. 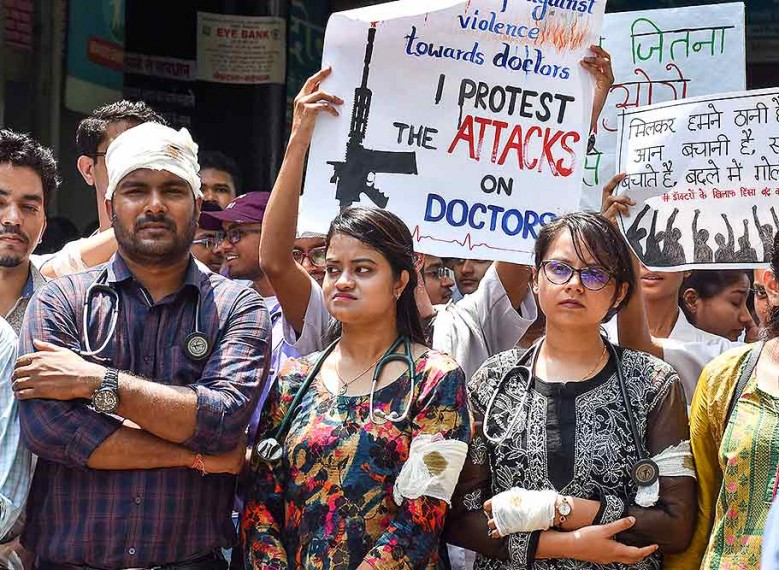 Members of Doctors Association show solidarity and stage a protest against assault of an intern doctor in West Bengal, in Ranchi.
Outlook Web Bureau June 17, 2019 00:00 IST Healthcare Services Take Hit In Delhi, Goa, Kerala And Other Parts As Doctors On Nationwide Strike 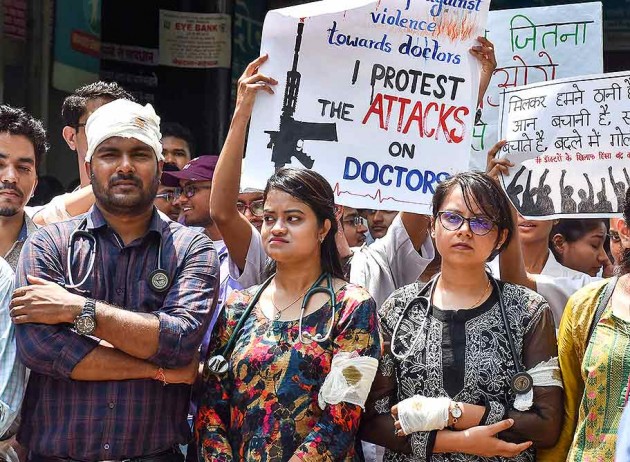 Doctors in different parts of the country on Monday extended solidarity to their West Bengal colleagues by boycotting work for a day and carrying out a silent protest march.

The Indian Medical Association (IMA) had called for a nationwide strike against rising attacks on doctors at the hands of families of patients who fail to recover or pass away during treatment.

The healthcare services across several states, including in Delhi, were hit after the doctors took to strike.

Here's how the strike panned out in Delhi, Karnataka, Goa and Kerala and other states:

Doctors of the All India Institute of Medical Sciences (AIIMS) announced that they will go on a strike in solidarity with doctors across the country who are boycotting work in protest against violence against them in West Bengal.

AIIMS doctors who had earlier said they would not be participating in the strike said they will withdraw elective services from 12 noon today till 6 am on Tuesday, a statement issued by the Resident Doctor's Association (RDA) of AIIMS said today.

Emergency services including Casualty, ICU and Labour room services will however not be affected.

Several doctors in Goa boycotted work and took out a 'silent protest march' to condemn the attack on some of their colleagues in West Bengal.

In response to the strike call given by their apex body IMA, the non-essential medical services were suspended in various government and private hospitals of the coastal state, an official said.

A number of doctors participated in the silent protest march taken out from the Azad Maidan to Panjim market in the
state capital.

Healthcare services across Kerala were affected as doctors of state-run hospitals boycotted work for two hours and those of the private hospitals supporting the 24-hour nationwide strike being observed in support of the protests in West Bengal.

Long queues near Outpatient Departments (OPDs) were seen in several government hospitals across the state in the early hours of the day. Some patients said they didn't know of the strike and have been waiting for hours.

"We left our homes at 3 am and do not know if the doctors will attend on us," a patient at the government hospital here said.

Hundreds of private hospitals, nursing homes and clinics in Karnataka suspended outpatient services following a call by the Indian Medical Association to hold a day-long strike in solidarity with the doctors sitting on a protest in West Bengal.

The strike had a telling effect as people were seen struggling to get medical aid in private hospitals.

However, the government hospitals remained open as usual following a circular by the Commissioner of Health and Family Welfare.

Health department sources said there was a heavy rush at government hospitals since morning.

Doctors at government hospitals in Jharkhand staged demonstrations, wore black badges and boycotted work at outpatient departments in response to the strike called by the Indian Medical Association (IMA).

Doctors at the medical college and hospitals are on dharna, wearing black badges and demanding security for themselves.

"OPDs are closed but emergency services are being provided," Dr Ajay Kumar, the Convenor of IMA (Jharkhand-Chapter) told PTI.

In a meeting held at Indira Gandhi Medical College and Hospital here at 9 am, members of the Residents Doctors Association (RDA) decided not to observe a strike to take care of the admitted patients, said IGMC RDA general secretary Dr Bhartendu Negi.

But the doctors were seen wearing black bands while discharging their duties.

Junior doctors and interns held protests in Ahmedabad, Surat, Rajkot, Vadodara, Jamnagar and other major towns of the state and did not report to work in the Out-Patient Departments (OPDs) of various government and private hospitals, he said.

Around 28,000 doctors across the state, including 9,000 in Ahmedabad, have joined the 24-hour strike, an official from IMA's Gujarat chapter said.

Doctors strike has paralyzed medical and health services in Bihar, where an intense heat wave has claimed 61 lives in the past few days while nearly 100 children, have died of suspected acute encephalitis syndrome (AES).

Long queues of hapless patients were seen at PMCH in Patna, the largest hospital in the state, as services at OPDs remained completely suspended, though hospital sources said that emergency services have not been allowed to be affected.

OPD services are also paralyzed at the SKMCH hospital in Muzaffarpur, where 290 children afflicted with AES have been admitted since June 1, out of whom 80 have died so far.

Medical services were hit on Monday as doctors across Assam joined the daylong called by the Indian Medical Association (IMA) in solidarity with their counterparts in Bengal.

Services have been withdrawn for 24 hours at the outpatient departments of all medical colleges and hospitals in the state, with the junior doctors observing a sit-in protest, sporting black badges.

The doctors, with placards in hand, were seen demanding security for medicos across the country.

(With inputs from  agencies)