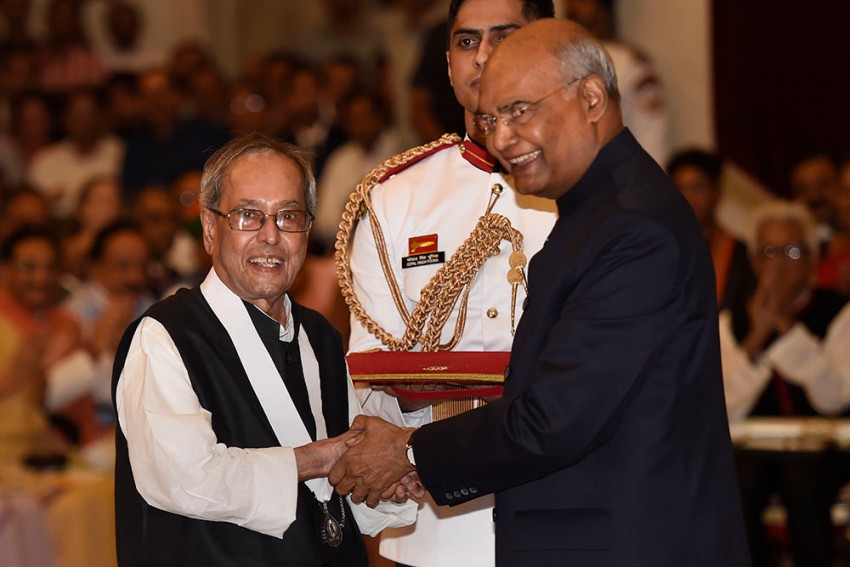 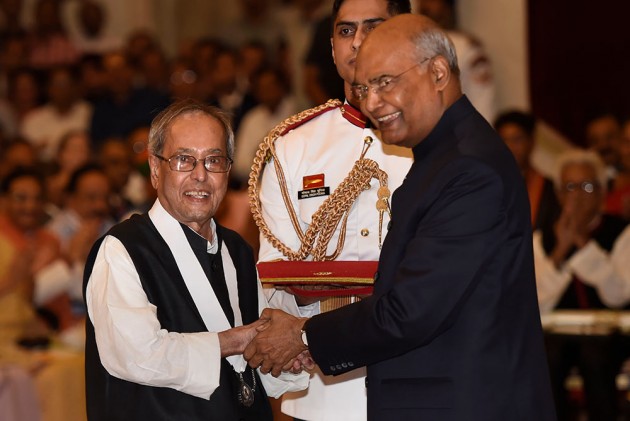 President Ram Nath Kovind gave the award to Mukherjee, Hazarika's son Tej and Vikramjeet Singh, a close relative of Deshmukh, at a function held at the Rashtrapati Bhavan.

The Bharat Ratna has been conferred after a gap of four years. Former prime minister Atal Bihari Vajpayee and founder of Banaras Hindu University Madan Mohan Malviya were given the award by the Narendra Modi government in 2015.

Mukherjee, fondly known as 'Pranab Da', has been the fifth president to receive this award. He was the president between 2012 and 2017.

Mukherjee, 83, who was also known as the quintessential 'Man Friday' of the Congress, joins the elite club of former presidents Sarvepalli Radhakrishnan, Rajendra Prasad, Zakir Hussain and V V Giri, who were also awarded the nation's highest civilian honour.

Mukherjee became India's youngest finance minister in 1982 at the age of 47. From 2004, he went on to head three crucial ministries -- external affairs, defence and finance -- and became the first occupant of the Rashtrapati Bhavan to have this distinction.

Deshmukh was associated with the RSS from 1928 till his death in Satna, Madhya Pradesh, in 2010 at the age of 94 and was known for starting a chain of RSS-inspired schools throughout India.

He was considered to be one of the architects of the Jai Prakash Narayan's movement against the Emergency in 1975 and among the key persons in the formation of the Janata Party government in 1977.

Born in 1926, Hazarika was a playback singer, lyricist, musician, singer, poet and filmmaker from Assam.

The cultural icon also had a brush with politics and had unsuccessfully contested the Guwahati Lok Sabha seat on a BJP ticket in 2004. He was an Independent MLA in Assam during 1967-72.

The government in January announced its decision to confer the Bharat Ratna upon Mukherjee, Deshmukh and Hazarika.

With these three recipients, 48 eminent people have been conferred the Bharat Ratna so far.