Explained: What's Narada Case? Who Are The Ministers Involved? 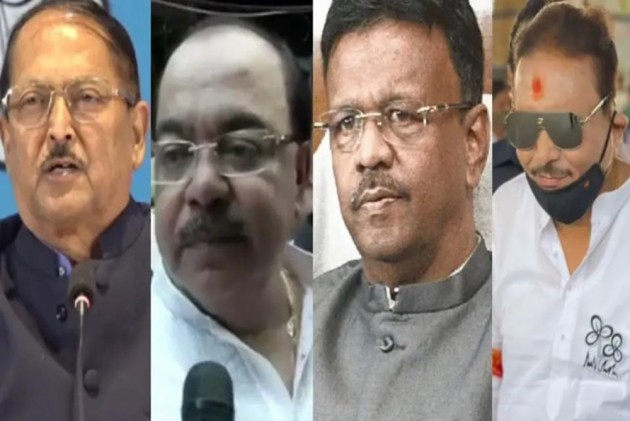 The move comes days after Governor Jagdeep Dhankhar gave his consent to the CBI for filing a chargesheet against the four accused and sanctioned prosecution against them.

All of them were state ministers when the Narada sting operation purportedly showed them taking money. The tapes were released ahead of the 2016 state Assembly polls. The Calcutta High Court had ordered a CBI probe into the sting operation in March 2017.

What is the Narada case?

The case pertains to the ‘Narada tapes’ sting operation shot in 2014 by Narada news portal, purportedly showing TMC leaders accepting bribes on camera. The sting was conducted over a period of two years and was supposed to be published in Tehelka magazine. Journalist Matthew Samuel, who later quit Tehelka, and launched his own TV channel in West Bengal posed as a businessman planning to invest in West Bengal, offered cash to twelve TMC leaders including seven MPs, four ministers and one MLA and a police officer as bribe and taped the operation.

In an exclusive interview with Outlook, Mathew Samuel, whose Narada sting operation, started it all, said the arrests show some progress in the “long wait for justice” but expresses his shock at the CBI’s failure to proceed against Mukul Roy and Suvendu Adhikari “because the evidence against them is pretty much the same as the evidence against those who have been arrested.”

He added, “The arrests today are just the tip of the iceberg. The sting proves the extent of corruption in governments. It shows how easy it is to bribe people in power, irrespective of their party affiliation. I posed as just another regular businessman but I was still able to meet senior ministers, MLAs, and bureaucrats just because these people thought they can make money out of a deal. I met Suvendu Adhikari in his office and gave him Rs. 5 lakh. This tape was also submitted to the CBI and forensically verified to be correct. I met Mukul Roy who did not accept cash directly but told me to give money to Mirza (suspended IPS officer arrested in the Narada case in 2019). I gave Mirza Rs 15 lakh and there are recorded conversations that prove that Mirza took the money for Mukul Roy. It may be correct to say that Roy did not receive the money directly from him and so there is no tape to show Roy took the money. Mirza, during interrogation, confessed to the CBI that he took the money for Roy. Why the names of Roy and Adhikari do not appear in the chargesheet or the list of sanctions for prosecution given by the Governor is a mystery to me. Frankly, it is shocking because you cannot cherry-pick who you arrest and who you don’t, based on the same evidence.”

Of the 12 accused TMC leaders, Mukul Roy - then a Trinamool Rajya Sabha MP - and Suvendu Adhikari - then a Lok Sabha MP - have since joined the BJP. The prosecution of BJP MLA from Nandigram, Suvendu Adhikari, has not been sanctioned yet by Lok Sabha Speaker Om Birla, according to a report in NDTV.

There has not been any action against Mukul Roy, now a BJP MLA, either. Sultan Ahmed, another TMC MP, died in 2017. The CBI has, however, asked for permission to prosecute Suvendu Adhikari, Sougata Roy, Kakoli Ghosh Dastidar, Prasun Banerjee and Aparupa Poddar. But, Birla has not granted sanction yet.

CBI and the ED probe

Despite criticism, TMC secured a win in 2016 assembly polls and Mamata Banerjee returned to power for the second time. But, on March 17, 2017, the Calcutta High Court ordered a preliminary probe to be conducted by CBI in the sting operation case as after it raised doubts regarding the impartiality of the probe being conducted by the West Bengal Police and the footage was certified as authentic by the Central Forensic Laboratory (CFL). The Court also directed the CBI to register an FIR against those who were involved in the case, if required.

The Enforcement Directorate (ED) is also running a parallel investigation. It has lodged a case about misappropriation of public funds under Anti-Corruption-Act and has issued multiple summons to the accused and Samuel. On April 17, 2017, the CBI filed a First Information Report against 12 Trinamool leaders for "criminal conspiracy". The CBI also subsequently summoned all of the involved figures, to assist in the investigation.

The ruling Trinamool Congress initially denied any connection with the sting operation calling it a product of political conspiracy and alleging that the videos were forged. CM Mamata Banerjee called it a smear campaign by the opposition manifesting from vendetta-politics. Later, the TMC also claimed that the money received was in the form of a donation. The Communist Party of India (CPIM) and the Bharatiya Janata Party (BJP) organised mass protests demanding the resignation of the politicians involved in the scam.