AAP, BJP and Congress, three of the major parties in the fray, have all fielded turncoats. 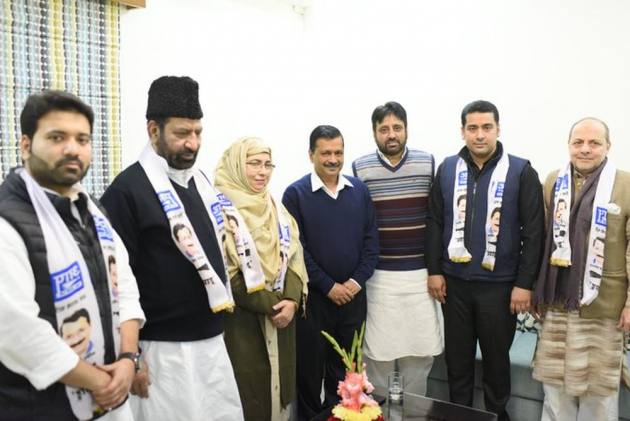 Ahead of the all-important Delhi Assembly elections, leaders from across the political spectrum are not just weighing in their options but also switching loyalties for tickets to contest polls.

On January 14, AAP announced its candidates for all 70 segments, dropping 15 sitting MLAs, and giving a chance to 23 new faces while fielding at least seven turncoats.

Soon after, several, who expected tickets, defected from the party.

In Battle For Delhi, Why Purvanchalis Are AAP Government's Blue-Eyed Boys

Chawaria, the national general secretary of Valmiki Mahapanchayat, is expected to be pitted against AAP minister Rajendra Pal Gautam in Seemapuri.

He said that he was disenchanted by the AAP and its national convener Kejriwal, as his views and decisions were questioned in the party.

Chawaria's departure was preceded by sitting AAP MLA Adarsh Shastri, who joined Congress, hours before the party announced the list of candidates. He has been fielded by Congress from the Dwarka seat, the one he won on AAP's ticket five years ago. He was one of the15 sitting MLAs AAP denied tickets.

AAP's Hari Nagar MLA Jagdeep Singh resigned from the party on January 18, citing denial of ticket. On speculation that he was planning to join the Shiromani Akali Dal, an ally of the BJP, Singh said that talks were still going on with the party.

Adarsh Shastri, the grandson of former Prime Minister Lal Bahadur Shastri, not just left AAP but also alleged that Kejriwal had demanded Rs 10 crore for the ticket from Dwarka. Shastri had quit as Apple's India sales head to join AAP in 2013.

While AAP denied the charges, interestingly, the Dwarka seat candidature went to Vinay Mishra, who recently defected from Congress.

Rajkumari Dhillon, who joined the party from the Congress recently, was fielded from Hari Nagar. Dhanwati Chandela, another Congress import, is contesting from Rajouri Garden.

Netaji was twice an MLA -- once an independent and then on a BSP ticket -- and was with Congress before joining the AAP. He replaced ND Sharma, the sitting MLA from Badarpur.

Chaudhary Surender Kumar, who has been with both the BSP and BJP, is the AAP nominee in Gokalpur.

In the same month, on the other hand, former AAP MLA from Chandni Chowk, Alka Lamba joined the Congress and will be contesting the seat representing the grand old party.

Congress has also faced flak from supporters for some of its choices.

For instance, Priyanka Singh, the daughter of former Delhi Assembly speaker Yoganand Shastri who resigned from the party on Friday, got a ticket from RK Puram seat. Shastri's resignation has not been confirmed by the party. This sparked protest outside Sonia Gandhi's residence at 10, Janpath as supporters of Congress leader Mahipal Singh, who was expecting the ticket instead, gathered there and alleged nobody knew Priyanka Singh.

The BJP has also irked some of its supporters after it came out with its first list of 57 candidates. In particular, it faced protests in Model Town and Gandhi Nagar constituencies after fielding former AAP MLAs Kapil Mishra and Anil Bajpai respectively. Both Mishra and Bajpai joined the saffron party last year.

AAP leader Gugan Singh switched over to the BJP on December 30. He said he had quit the Aam Aadmi Party as he was unhappy after being denied ticket.

The Congress has also fielded former Deputy Speaker Amrish Gautam, who has rejoined the party from the BJP, from Kondli in his second list of candidates.