The National Disaster Response Force has sent its 10 teams to Odisha and seven teams to West Bengal in view of the approaching Cyclone Amphan. 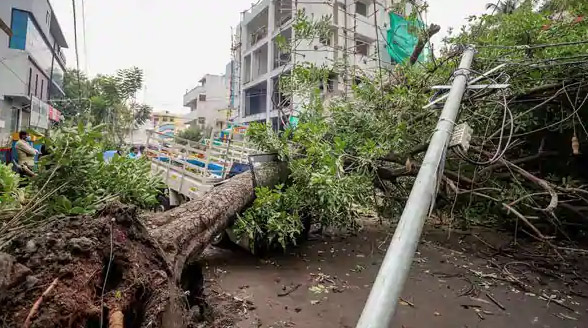 The cyclonic storm Amphan has now intensified into a "very severe cyclonic storm" over central parts of South Bay of Bengal and it is very likely to intensify further in the next 24 hours, said the India Meteorological Department (IMD).

"It is very likely to move nearly northwards slowly during the next 12 hours and then re-curve north-northeastwards and move fast across the northwest Bay of Bengal and cross West Bengal-Bangladesh coasts between Digha (West Bengal) and Hatiya Islands (Bangladesh) during afternoon/evening of May 20 as a Very Severe Cyclonic Storm," the bulletin read.

A dangerous thunderstorm and lightning alert has been issued for Jhumpura, Keonjhar, Patna, Saharpada and Champua block of Keonjhar district; Sukruli, Raruan and Karajia blocks of Mayurbhanj district, by Special Relief Organisation of the Odisha government.

Meanwhile, the National Disaster Response Force (NDRF) has sent its 10 teams to Odisha and seven teams to West Bengal in view of the approaching Cyclone Amphan.

While the NDRF teams have been deployed in West Bengal's South 24 Pragnas, North 24 Pragnas, East and West Midnapore, Howrah and Hooghly, they have been sent to Odisha's Puri, Jagatsinghpur, Kendrapada, Balasore, Japur, Bhadrak and Mayurbhanj.

The NDRF is monitoring the situation and working with states and their disaster management teams, and the IMD.

India Joins 58 Nations To Question WHO On Covid-19 Response