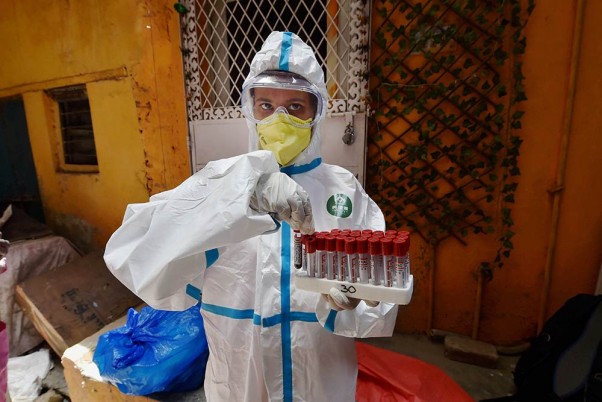 A record single-day spike in COVID-19 cases was reported in several states like Maharashtra, Tamil Nadu, Andhra Pradesh, Karnataka and West Bengal as the country-wide tally rose by nearly 20,000 on Sunday.

The Union Health Ministry said the number of cases was 5,28,859 on Sunday and recoveries exceeded active COVID cases by over one lakh, stressing that "graded, preemptive and proactive" steps taken by it along with the states and union territories   are showing "encouraging results".

"Around 58.56 per cent patients have recovered so far," an official said.

With India witnessing a surge of 3,38,324 infections from June 1 as the lockdown restrictions eased, Prime Minister Narendra Modi said people have to remain more vigilant in the "unlock" period and cautioned that failure to follow COVID-19 norms will put at risk their lives and those of others.

India will have to focus on defeating coronavirus and bolstering the economy, he said.

"Always remember, if you do not wear a mask, do not observe the two-yard social distancing norms or do not take other precautions, you are putting others at risk besides yourselves, especially the elderly and children at home," he said in his monthly "Mann ki Baat" radio address.

Speaking in the same vein, Maharashtra Chief Minister Uddhav Thackeray made it clear that the restrictions will continue even after June 30 as the crisis is not yet over.

"Even if I am not using the term lockdown, do not  misunderstand and lower your guard. In fact, we need to show more stringent discipline," he said.

"We can't leave this war halfway in this final phase. I am sure that you will continue to cooperate with the government to ensure that lockdown is not reimposed," he said in a televised address.

The unlock process, dubbed Mission Begin Again by the state government, is being gradually implemented to put the economy back on track, Thackeray said.

Maharashtra, which has the highest number of Infections, reported the biggest single-day spike of 5,493 COVID-19 cases which took the tally of patients in the state to 1,64,626, a health official said.

In the financial capital Mumbai, police urged the city residents not to move beyond the two-km radius of their homes unless it is for attending office or medical emergencies.

With the further easing of coronavirus-induced curbs in the state, some salons opened in the city on Sunday after a gap of three months while many remained closed due to lack of manpower.

Chief Minister Thackeray  also said the 'Chase the Virus' initiative that received good results in worst-hit Mumbai will now be expanded to other parts of the state.

As part of the campaign, 15 close contacts of a COVID-19 patient will be compulsorily kept in institutional quarantine. It was launched on May 27.

The country reported a record 19,906 cases in single day. This is the fifth consecutive day that coronavirus infections have increased by more than 15,000. The death toll rose to 16,095.

Among the other states which had a record single-day surge, Tamil Nadu reported 3,940 new coronavirus cases taking the overall tally in the state to 82,275; Gujarat had 624 new coronavirus cases and total count of 31,397; Andhra Pradesh had a spike of 813 cases as its tally reached 13,098 and West Bengal had 572 fresh COVID-19 cases which took the total number to 17,283.

Karnataka too reported a record 1,200 new coronavirus  cases, taking the total number of infections to 13,190.

Bengaluru police said criminal cases will be filed against those flouting face mask and social distancing rules and public can call police in case someone refuses to follow the COVID-19 preventive norms in the city.

In Delhi, where authorities are implementing a revised  strategy after a major surge in cases, the number of COVID-19 containment zones has risen from 218 to 417 after a re-mapping of such areas, while around 2.45 lakh people have been screened in a mammoth house-to-house survey to check the spread of COVID-19.

The national capital recorded 2,889 fresh coronavirus cases, taking the tally in the city over the 83,000-mark, while the death toll from the disease mounted to 2,623.

Officials said the count of containment zones is expected to jump further as the authorities in some districts were yet to complete the task of redrawing such areas following the Centre's directions.

"We have screened around two lakh people for COVID-19 in house-to-house survey being conducted across the city. Also, 45,000 people have been screened in COVID-19 containment zones," an official told PTI.

The process of screening every household has to be completed by July 6.

Stepping up surveillance, Uttar Pradesh's Additional Chief Secretary (Medical and Health) Amit Mohan Prasad said the state will also launch a large-scale campaign from Meerut division in July, where house-to-house survey will be undertaken similar to the pulse polio immunisation.

"It will be carried out in containment and non-containment zones," he said.

The Madhya Pradesh government said it will launch a 'Kill Corona' campaign from July 1 to control the spread of COVID-19 in the state, where 13,186 cases have been reported so far.

Under the campaign, door-to-door survey will be conducted and tests would also be done on citizens for other diseases as well, Chief Minister Shivraj Singh Chouhan said during a virtual review meeting on the COVID-19 pandemic

Chouhan said during the 15-day campaign, 2.5 lakh tests will be carried out and 15,000 to 20,000 samples would be collected daily, according to a press release.

A seroprevalence survey by Indian Council of Medical Research found that over 14 per cent of Kolkata residents have developed COVID-19 antibodies,

A seroprevalence survey conducted via random and rapid tests -- the IgM and the IGg -- indicate the rate of transmission in a community and whether it has started developing herd immunity to a virus.

According to senior doctors, the survey indicated that the transmission is high in the metropolis, which is far from developing herd immunity or antibodies to combat COVID-19

Meanwhile, Bihar's Backward and Extremely Backward Classes Welfare Minister Vinod Kumar Singh and his wife tested positive for COVID-19 on Sunday and were sent to an isolation ward at a city hotel in Katihar district, officials said.

India now has 1,036 diagnostic labs dedicated to COVID-19. This includes 749 in the government sector and 287 private labs.

As on June 28, the COVID related health infrastructure has been strengthened with the availability of 1,055 dedicated COVID Hospitals with 1,77,529 isolation beds, 23,168 ICU beds and 78,060 oxygen supported beds, it said.

Of the 410 new deaths reported till Sunday morning, 167 were in Maharashtra, 68 in Tamil Nadu, 66 in Delhi, 19 in Uttar Pradesh, 18 in Gujarat, 13 in West Bengal, 11 each in Rajasthan and Karnataka, nine in Andhra Pradesh, seven in Haryana, six each in Punjab and Telangana, four in Madhya Pradesh,  two in Jammu and Kashmir and one each in  Bihar, Odisha and Puducherry.

The number of active cases stands at 2,03,051, while 3,09,712 people have recovered and one patient has migrated, according to the updated data.

"The graded, preemptive and proactive steps taken by the Government of India along with the states and UTs for prevention, containment and management of COVID-19 are showing encouraging results," the Union Health Ministry said in a statement.