Both Amravati and Yavatmal fall in Vidarbha, a region that has been reporting a steady rise in Covid-19 cases since the start of February. 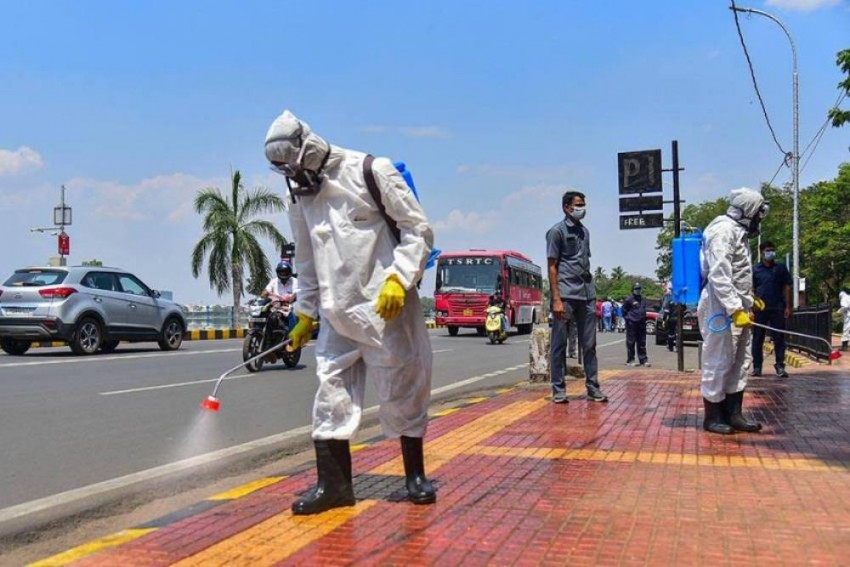 Amid a surge in coronavirus cases, the administration in two eastern Maharashtra districts of Amravati and Yavatmal on Thursday announced the strict implementation of restrictions, including a weekend lockdown in Amravati in order to contain to spread.

In Mumbai, the civic body has said that it will appoint about 300 marshals to take action against passengers travelling without masks in suburban railways.

The administration in the Yavatmal district ordered curbs on gatherings and also the closure of schools (which had reopened for select classes) for ten days, measures coming on a day when the state reported 5,427 new cases, a daily tally not seen in more than two months.

A weekend lockdown was announced in the Amravati district, from 8 pm on Saturday to 7 am on Monday, a period during which markets and other establishments will remain shut, but essential services will remain unaffected.

Schools (for students from Classes 5 to 9), colleges, and coaching classes in the Yavatmal district will remain closed till February 28, while only 50 persons will be permitted at weddings, Yavatmal collector D M Singh said.

Religious places will remain open but COVID-19 protocols will be strictly implemented, he said.

Hotels and restaurants will be allowed to operate between 8 am to 9.30 pm, while markets and shops will remain open till 8 pm, Singh said.

Amravati Collector Shailesh Naval said on weekdays, all establishments in the district, including hotels and restaurants, would stay open only till 8 pm (from earlier 10 pm).

Yavatmal collector Singh told PTI that they have not stopped anything in the district.

"However, strict enforcement of restrictions as per the guidelines of the Government of India and Government of Maharashtra is being implemented in the district," Singh said.

Both Amravati and Yavatmal fall in Vidarbha, a region that has been reporting a steady rise in COVID-19 cases since the start of February.

Chief Secretary Sanjay Kumar also wrote to collectors of the three districts to declare areas having high prevalence of COVID-19 as containment zones to check further transmission of the disease.

Yavatmal collector Singh said the number of COVID-19 cases in the district had been increasing since February 1.

Almost 80 to 90 percent of new cases were being reported from Yavatmal, Pandharkawda and Pusad cities, he said.

"We have decided to conduct around 500 tests per day in Yavatmal, Pandharkawda and Pusad municipal corporations. Today we are ordering lockdown in Yavatmal district till February 28," Singh said.

"In view of a spurt in COVID-19 cases, I have decided to impose a weekend lockdown in Amravati district. To avoid any stricter lockdown in the future, I appeal to people to follow COVID-19 appropriate behaviour," Collector Shailesh Naval said.

Naval said during the weekend lockdown all markets and other establishments will remain shut. "Swimming pools and indoor games, too, will remain closed, while only five people will be allowed at religious ceremonies," Naval said.

According to the government, Amravati and Akola cities reported 542 and 152 COVID-19 fresh cases, respectively, on Thursday. Yavatmal district recorded 131 cases during the day.

The Akola circle, which covers the three districts besides Buldhana and Washim, reported 1,258 cases – second only to the Mumbai Metropolitan Region, which saw a rise of 1,432 patients during the day.

According to an official statement, the daily COVID-19 positivity rate of Akola is 32 per cent, while the same for the week is 24 per cent.

The daily and weekly positivity rate of the Amravati district is 48 per cent and 35 per cent respectively, the statement said.

Yavatmal's daily and weekly positivity rate is 15 per cent, the statement said.

Maharashtra's daily and weekly positivity rate is 8.8 per cent and 7.76 per cent, respectively, it said.

There is a need to take care given the way the number of cases is going up (of late).

"District collectors have been ordered to take necessary steps to contain the spread of the disease or control the number of patients there, Transport Minister Parab told reporters.

In his letter to the three collectors, Chief Secretary Kumar noted that an upsurge is being seen in COVID-19 positive cases in Achalpur taluka and Amravati city (Amravati district) and areas under Yavatmal, Pusad and Pandharkawada municipal councils in the Yavatmal district.

Similarly, the Akot and Murtizapur talukas and Akola city in Akola district too have seen upsurge in COVID-19 cases, Kumar observed.

In the light of the above, you are directed to declare the above-mentioned affected areas as Containment Zones in order to check further transmission of the COVID-19 virus.

Detailed orders regarding permissible and non-permissible activities as well as taking up all required precautionary measures in the said zones may be issued by you (district collectors) immediately, the chief secretary said.

In the statement, the government asked the authorities to increase contact tracing in districts that are more affected.