The Central government issued new guidelines for phased re-opening of all activities outside containment zones for the next one month. 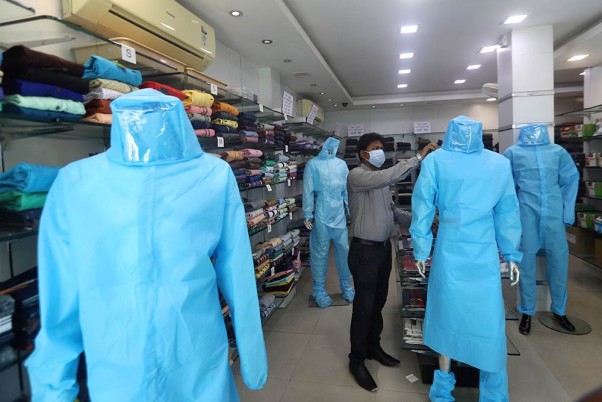 A shopkeeper puts a protective suit on a mannequin for sale at a garment shop after the government eased restrictions during the nationwide lockdown, in Chennai.
PTI Photo
Outlook Web Bureau May 30, 2020 00:00 IST Malls, Hotels, Restaurants, Places Of Worship Can Reopen From June 8: Home Ministry

The Ministry of Home Affairs has issued new guidelines for phased re-opening of all activities outside containment zones for the next one month. It has, however, extended the lockdown in containment zones across the country up to June 30.

"Reopening of prohibited activities in areas outside containment zones to be done in phased manner," said Home Ministry on Saturday.

According to the MHA, activities will be allowed from June 8 at religious places of worship, hotels, restaurants and other hospitality services. Shopping malls will also be allowed to open from June 8.

There willl be no restriction on inter-state, intra-state movement of people, goods and there will be no separate permission required for such travels.

Schools, colleges, educational, training, coaching institutions will be opened after consultations with states and UTs, said the Home Ministry.

"State, UTs will hold consultations with parents, other stakeholders on re-opening of academic institutions from July," said MHA.

Night curfew timing have been revised. Now movement of individuals have been prohibited between 9 pm and 5 am across country.

Meanwhile, the lockdown will continue to remain in force till June 30 in containment zones that will be demarcated by district authorities, the revised guidelines by the Ministry of Home Affairs said.

"States, UTs will identify buffer zones outside containment zones, where new cases are more likely to occur," said the MHA, adding that within those buffer zones, restrictions as considered necessary, may be put in place by district authorities.