The parties seek to censure her for her "unwarranted remarks" on Mahatma Gandhi's assassin Godse. 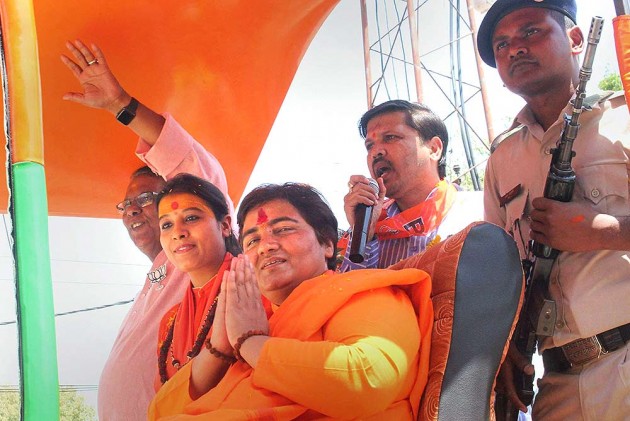 The Congress and other constituents of the United Progressive Alliance (UPA) are set to move a censure motion in the Lok Sabha against BJP MP Pragya Thakur calling Nathuram Godse a 'deshbhakt', sources said on Thursday.

The Congress is spearheading the motion that seeks to censure Thakur for her "unwarranted remarks" on Mahatma Gandhi's assassin Godse and against the party, the sources said.

Thakur created a controversy on Wednesday with her 'deshbhakt' remark in the Lower House during DMK member A Raja's narration of a statement by Nathuram Godse on why he killed Mahatma Gandhi.

However, as opposition members protested against Thakur's remark, it was expunged.

Congress MPs and Lok Sabha MPs of other UPA constituents including the DMK, NCP, RJD, IUML and some other parties are planning to move the motion before Lok Sabha Speaker Om Birla, they said.

Senior Congress lawmaker Shashi Tharoor told IANS that he has drafted an application and will soon discuss with other opposition parties, who stand united, to confront Thakur for her comment.

"We have sought an urgent apology from Pragya Thakur for her remark, failing which we are left with no option but to initiate a censure motion," Tharoor said.

BJP working president J P Nadda on Thursday announced disciplinary action against Thakur and condemned the controversial Hindutva leader's remarks in a bid to defuse the political crisis triggered by her remarks on Wednesday.

Thakur later said she was not defending Godse but Udham Singh.

"Storm of lies becomes so big at times that even day appears to be night but the Sun does not lose its light. People should not be swayed by this storm. Truth is that I did not tolerate insult to Udham Singh yesterday," the Bhopal MP tweeted.

Earlier this year, during the Lok Sabha election campaign, she had called Godse a 'deshbhakt', sparking controversy. Prime Minister Narendra Modi had come out condemning her statement at that time.

Omicron in India: Planning to travel? Five Things You Must Do