The BJP national executive meeting will set the pitch for the upcoming Assembly polls in five states—Uttar Pradesh, Uttarakhand, Manipur, Goa and Punjab—scheduled for early next year. 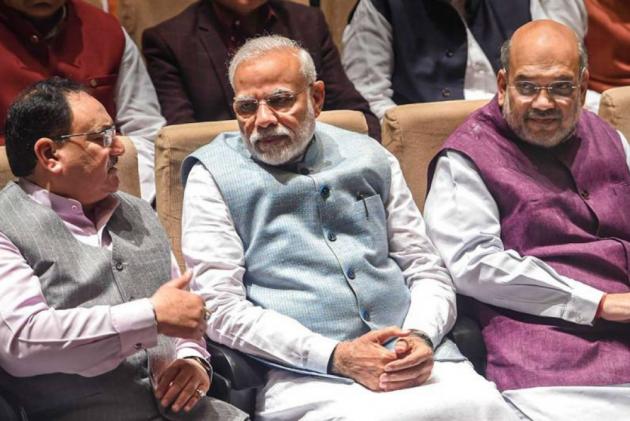 Coming on the heels of the by-polls in 29 Assembly and three Lok Sabha seats, the Bharatiya Janata Party (BJP)’s national executive meeting is expected to deliberate the election results and set the agenda for the assembly polls early next year.

Read More | BJP's National Executive To Meet Today; Elections In UP, Punjab, Among Others To Be Centre Of Discussion

The national executive meeting, which will be chaired by BJP national president JP Nadda in the party headquarters in the capital on Sunday, is significant as it will be the first physical meeting convened after 2019. The party could not convene physical meetings because of Covid-19 restrictions in the last two years. This will also be the first national executive meeting after J P Nadda took over as the party president.

The BJP, in a communication to all its state units, said that "In view of the ongoing Covid-19 protocols, all state presidents, state general secretaries (organisation) and national executive members of that respective state will attend the meeting virtually from their respective state party offices.”

Apart from the by-poll results, the meeting will set the pitch for the upcoming Assembly polls in five states—Uttar Pradesh, Uttarakhand, Manipur, Goa and Punjab—scheduled for early next year.

Sources also said that there will be a meeting of the general secretaries on Saturday to finalise the resolutions which will be adopted at the national executive meeting.

They also added that the Assembly elections in politically crucial Uttar Pradesh will be high in the agenda in view of the ongoing farmers protests against the three farm bills passed by the Union government last year. The BJP took a beating in the by-election in the Ellenabad constituency in Haryana, which was the epicentre of the farm agitation. Though the BJP pulled out all stops in the prestigious battle, the ruling BJP-LJP alliance lost the seat to INLD’ s Abhay Singh Chautala, who had the support of many farmers unions.

Party insiders said that the focus of the national executive meeting will be mainly on BJP’s setback in Himachal Pradesh by polls and it will introspect the reasons for the disappointing results.

In a major embarrassment to the party, the BJP lost one Lok Sabha and three Assembly seats in Himachal Pradesh where it is in power.

“There will be introspection about the Himachal Pradesh results. I don’t think the results were a reflection of public anger against the ruling government. We will do the necessary course corrections,” said a leader. However, the stunning bypoll results in Assam and Madhya Pradesh is a huge recognition to the government and its achievements added the leader.

Though the Himachal Pradesh party leaders have attributed the rising prices as the reason for the party's setback in the state, the internal strife in the state unit was out in the open even before the election. There are speculations of a change of guard at the helm in the party. Apart from Himachal Pradesh, the Rajasthan bypolls results has also widened the fissures in the state unit. In the bypolls held in two seats, the BJP came in a distant fourth position. In West Bengal too, the party will do a soul searching as it suffered a humiliating defeat in the hands of TMC, which

On the eve of Diwali, the government has announced a cut in petrol and diesel prices, which some political commentators describe as a damage control measure by the government.

Another BJP leader said that the national executive meeting may also discuss the by poll results In Karnataka, where it lost the Hanagal Assembly constituency, the home district of newly inducted Chief Minister Basavaraj Bommai who replaced veteran leader Yediyurappa.

Political analyst Neerja Chowdhury feels that the BJP will have to take a relook at its strategies and rework its alliances in the wake of the by-poll results. The Mandi Lok Sabha constituency was wrested by the Congress from the BJP and its vote share also declined by 20 per cent. The BJP faced a setback in Dadra and Nagar Haveli Lok Sabha constituency, which was won by the Shiv Sena candidate. The BJP’s vote share recorded a seven per cent fall here too.

“The BJP faced a major setback in Himachal Pradesh where it’s in power. It is a warning signal for the party considering the impending polls in Uttarakhand and other states,” says Chowdhury.

Recently, the BJP had reconstituted its national executive team by inducting new members Jyotiraditya Scindia, Virender Kumar and Ashwini Vaishnaw. However, Maneka Gandhi and her son Varun Gandhi were removed from the team which set off rumours of Varun Gandhi joining Congress.