The five-year-old tweet has been criticised by netizens for being 'misogynistic' and humiliating towards Arab women.

BJP MP from Bengaluru, Tejasvi Surya, has landed in hot water for a controversial tweet posted five years ago regarding women of Arab countries, which has now gone viral on social media.

Even though he has deleted the tweet, screenshots of the same are doing rounds on twitter, attracting vehement criticism towards the 29-year-old South Bengaluru MP.

"95% Arab women have never had an orgasm in the last few hundred years! Every mother has produced kids as act of sex and not love:@TarekFatah," Surya had tweeted on March 23, 2015, quoting Canadian-Pakistani author Tarek Fatah.

The five-year-old tweet has been criticised by netizens as "misogynistic" and humiliating towards Arab women.

"He not only insult the Arab women but also showed his mentality towards women," a Twitter user wrote.

This is really rediculus statement given by @Tejasvi_Surya, which he deleted later.
He not only insult the #Arab women but also showed his mentality towards women.
He showed with which values n ethics he grew up. Mr PM @narendramodi what action u r going to take against your MP? pic.twitter.com/F3PP3tNBG8

The Congress too criticised Surya, with its spokesperson Sanjay Jha saying that the post had made India "embarrassed, humiliated".

The BJP gives tickets to Praggya Singh Thakur and #TejasviSurya etc because it helps popularise their hardline bigoted political profile.

Some came to Surya's defence saying the tweet was only quoting Tarek Fatah. 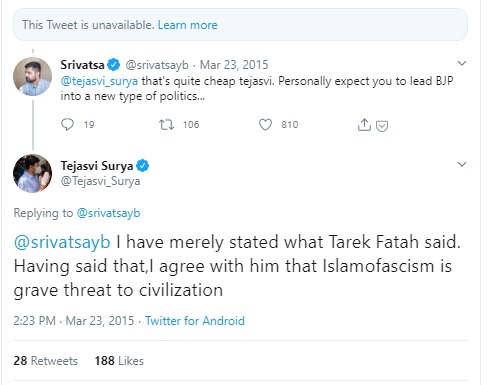 Few intellectuals from Arab countries also voiced their criticism against the tweet.

Prime Minister ..
An Indian Member of Parliament accuses Arab women, and we Arabs are asking for his membership to be dropped !!@narendramodi@PMOIndia pic.twitter.com/aQl4XayWZU

@PMOIndia Respected Prime minister @narendramodi India's relation with the Arab world has been that of mutual respect. Do you allow your parliamentarian to publicly humiliate our women? We expect your urgent punitive action against @Tejasvi_Surya for his disgraceful comment. pic.twitter.com/emymJrc5aU