Punjab and Haryana state highways are closed, High Courts in both states have put a stay on the physical hearings, bus services have come to a standstill. 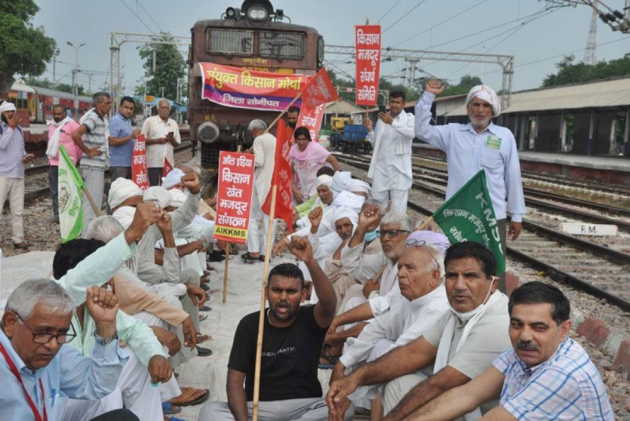 Farmers' organizations protesting against the three agricultural laws of the central government on Monday observed a bandh across India. The bandh that started at 6 am will continue till 4 pm. Opposition parties including Congress, Aam Aadmi Party have supported the 10-hour-long Bharat Bandh, called by Samyukta Kisan Morcha (SKM), an umbrella organisation that includes nearly 40 farmer organizations.

In view of the call for bandh by farmers' unions, the railways have cancelled 18 passenger trains in Ferozepur Division. Punjab and Haryana state highways are closed, High Courts in both states have put a stay on physical hearings and bus services have come to a standstill. Farmers are standing on railway tracks. Many trains have been stopped or cancelled. Malwa Express and Dadar Express have arrived at Kurukshetra railway station sometime back. Both the trains will stop here. Malwa Express was to go towards Vaishno Devi Katra, while Dadar Express was to proceed to Amritsar. Most markets in Punjab Mohali, Ludhiana, Jalandhar and most regions of Malwa are closed.

Meanwhile, Punjab Chief Minister Charanjit Singh Channi has expressed solidarity with farmers and urged the Centre to repeal the three 'anti-farmer' laws on Twitter. "Our farmers have been struggling for their rights for more than a year and it is high time that their voice is heard. I request the farmers to raise their voice in a peaceful manner" Singh tweeted.

Haryana CM Manohar Lal spoke of democracy and said that farmers may agitate but they should do so peacefully. He added that adequate security measures had been taken across the state.

BKU leader Gurnam Singh Charuni said that they will not stop ambulances, fire brigades and emergency vehicles. He has requested all sections of protesters to keep their respective institutions closed,  including traders, transporters, sellers of goods or shopkeepers. National highways, state highways, and local roads will remain closed from 6 am to 4 pm for all except emergency vehicles.

Charuni said that the police have started sending summons to the farmers against whom cases are registered. The police have started calling through the court. "We will not allow any farmer brother to be arrested. Till the time our agitation is decided, then our cases will also be decided. If this time the farmers are subjected to atrocities, they will gather around the residence of Prime Minister Narendra Modi," the farm leader said.