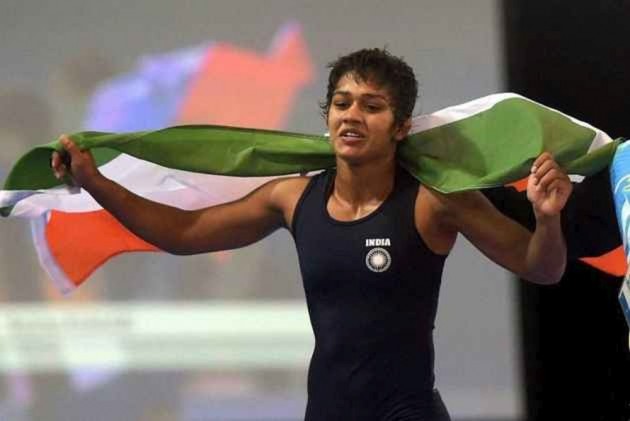 Two-time Commonwealth Games gold medalist, wrestler Babita Phogat, who is being fielded by the BJP from Dadri (Haryana) for the upcoming state assembly polls, is advocating promotion of women's sports in the state.

She aims to rechristen Prime Minister Narendra Modi's flagship 'Beti Bachao, Beti Padhao' programme by incorporating 'Beti Khilao' in it with an aim to not only overcome the problem of decline in child sex ratio but also promote sports among women in villages.

Being a sportsperson, Babita said if she is voted to power, she would advocate for starting a new campaign in the state, 'Beti Bachao, Beti Padhao, Beti Khilao' to promote sports among the girls.

Besides Babita, the others in the fray are veteran politicians belonging to the Jat community.

While Nirpender and Satpal are former legislators, Sombir finished second in the 2014 assembly polls.

As per election records, no candidate has ever won the seat for the second consecutive term and every time the competition has been close.

In the last four assembly elections, the margin of votes of the winner has been a slender -- less than 2,000.

The total electorates in the Jat-dominated Dadri assembly constituency are 193,882, including 89,213 women.

Haryana will go the polls in a single phase for 90 assembly seats on October 21. The counting of ballots will be on October 24.

Babita, in her campaigns has been highlighting Modi's programmes and achievements of Chief Minister Manohar Lal Khattar.

"When you are representing a country in international competition, the country's prestige is at stake. In the political battleground ,too, it is the prestige of the party that is at stake, she told IANS.

"For me highlighting the achievements of the BJP governments, both in the Centre and state, is my top priority.

In my priorities, the focus will be on strengthening infrastructure, basic amenities, healthcare for all and transparency in local administration, besides sports", she added.

She does not believe in gunning her political rivals. "When you have achievements, propagate them publically," she said.

Hailing the government decision to abrogate Article 370 and 35-A, she is telling the voters, "It's a historic decision."

On Monday,  Prime Minister Narendra Modi at a public rally in Dadri said Chinese President Xi Jinping -- during his recent visit to India -- told him that he had watched the Aamir Khan-starrer "Dangal".

"I felt really proud of Haryana on hearing this," Modi had added.