The Model Code of Conduct kicked in following the press conference by the Election Commission on March 10 announcing seven-phase polls across the country between April 11 and May 23. 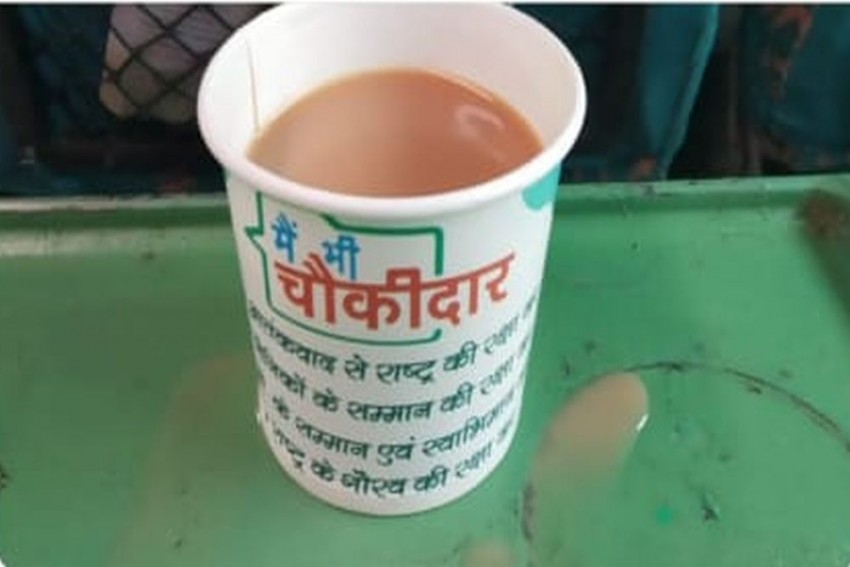 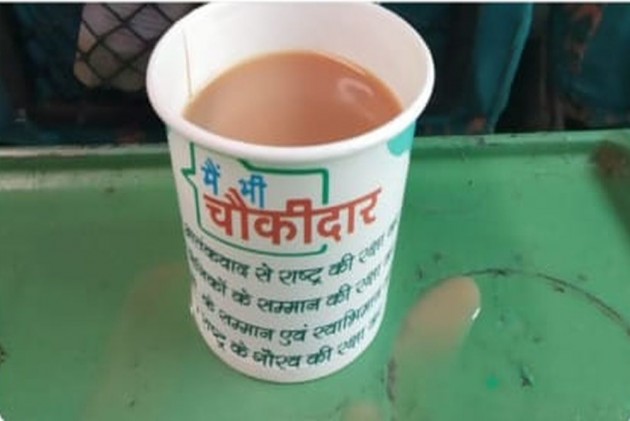 After the Ministry of Civil Aviation and the Ministry of Railways were issued notices by the Election Commission for having Prime Minister Narendra Modi’s face on airline boarding passes and railway tickets at a time when the Code of Conduct is in play, the Railways may find itself in another storm, literally in a tea-cup.

Former government officer D.N. Mohanty boarded the New Delhi Katgodam Express, Train no 12040, this morning and was surprised. Mohanty, a former ADG at All India Radio tells Outlook that he boarded the train at Ghaziabad on Friday morning. The train has a standard practice of serving a cup of tea with biscuits following which there’s breakfast followed by another cup of tea or coffee.

“I kept seeing that the paper cups had the words ‘Main Bhi Chowkidar’ on it,” he says. Mohanty says that while he took a picture the first time, he waited for the next cup to come around. “I was shocked that all the cups were the same. I took a picture and put it up on social media. The question though, is: Who served it? It is the responsibility of the Railways. It is not a private company serving this. We are paying money to the railways who provide the ticket and serve what they have to. But this is what is going on even when the model code of conduct is in place,” he says.

Many journalist friends are asking for the name & no of the passenger who's taken this pic. I spoke to my friend &he has no problem in speaking to media. His name is DN Mohanty. He is a retired IIS officer. His numbers are:9818945993,9212518963. He has also saved 2 cups as proof. pic.twitter.com/z8GWvhWrkA

“This is horrifying in a democracy. How can a public organisation use this platform for party ends? That is the question I’m asking,” Mohanty says. The Model Code of Conduct kicked in following the press conference by the Election Commission on March 10 announcing seven-phase polls across the country between April 11 and May 23.

"News reports that tea has been served in cups labelled  "main bhi chowkidar" have been investigated. This was without any prior approval of IRCTC. The cups have been withdrawn with immediate effect. It may be noted that only few of these cups were in circulation and an explanation has been called from Supervisors/Pantry In-charges. A fine of Rs 1 lakh has been imposed on the service provider and a show cause notice has also been served for this misconduct," an IRCTC spokesperson told Outlook.

The Election Commission is yet to respond to queries.