The Congress party said the Uttar Pradesh government has refused to grant permission to allow the buses, ferrying migrant labourers, to enter the state. 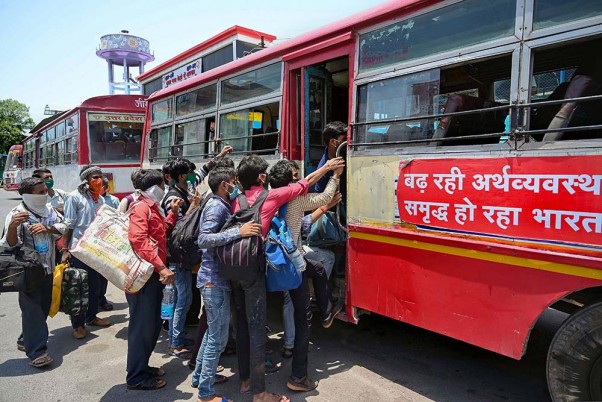 As many as 500 buses, arranged by Congress party to ferry migrants from Alwar in Rajasthan to Uttar Pradesh, are stranded at the Bahaj inter-state border as they did not get the permission from the UP government to enter into the state, party leader Priyanka Gandhi Vadra said on Sunday.

She said the Uttar Pradesh government has refused to grant permission for the buses ferrying labourers.

In a tweet, Gandhi said, "A number of labourers are stuck at the borders of UP. They are moving on foot, and today they are made to stand for hours. They are not allowed to come inside (the state). They are without jobs for the past 50 days, and their livelihood has come to a standstill."

In another tweet, the Congress general secretary said, "Mere announcements and doing petty politics in the name of sending labourers home will not do. More trains should be run, buses should be run. We have sought permission to run 1,000 buses, allow us to serve (the people)."

Congress General Secretary Priyanka Gandhi Vadra had arranged 500 buses to take migrants from Alwar and Bharatpur to other parts of the country.

On Saturday, Priyanka Gandhi wrote to chief minister Yogi Adityanath seeking permission to ply 1,000 buses for the migrants after tragic accident in Auriyya in which 24 migrants lost their lives.

Gandhi, who is also in charge of party affairs in eastern Uttar Pradesh, said that the Congress would bear the cost of these chartered buses at a time when the migrants are finding it tough to return home safely.

"Lakhs of workers are trying to get back to their homes while walking from various parts of the country and there are not enough arrangements made for them. We wish to operate 500 buses each from Ghazipur and Noida borders," Priyanka Gandhi said in the letter to Yogi Adityanath.

She asserted that the "nation-builders cannot be left to fend for themselves in such times".

Earlier, Uttar Pradesh Minister Sidharth Nath Singh had said that Gandhi was indulging in petty politics over the issue of migrants and that her demand to send buses to Uttar Pradesh border displayed her lack of understanding of logistics.