According to IAF officials, Ambala was chosen for housing Rafales in the western sector due to several factors such as depth from the border, base infrastructure and other technical facilities. 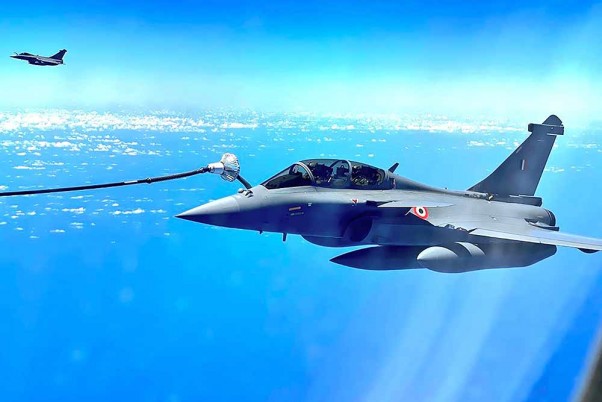 Midair refuelling of one of the five Rafale jets, which took off from France on its way to India.
PTI Photo
Harish Manav 2020-07-29T10:25:30+05:30 5 Rafales Come Home Today: A Look At Ambala Air Base’s Historic, Military Significance

Five French-made Rafale jets procured by India will touch down at Ambala on Wednesday, the country’s oldest airbase. Chief of Air Staff RKS Bhadauria will receive the five fighter jets.

The Rafale jets are India's first major acquisition of fighter planes in over two decades, and they are expected to significantly boost the Indian Air Force's combat capabilities. India had inked a Rs 59,000-crore deal on September 23, 2016 to procure 36 Rafale jets from French aerospace major Dassault Aviation.

What was initially an unpaved strip catering to flimsy biplanes of yore is now a massive sprawl gearing up to house one of the most advanced flying machines. The first batch of Rafales are reported to arrive at the frontline base on Wednesday, with a major infrastructure upgrade, including hardened shelters, hangars and maintenance facilities coming up over the past two and half years.

Also Read: Meet The IAF Man From Kashmir Who Saw Off First Batch Of Rafale Jets

According to Indian Air Force officials, Ambala was chosen for housing Rafales in the western sector due to several factors such as depth from the border, base infrastructure and technical facilities, airspace availability for local flying and training as well as allocation of IAF assets at other airbases in the region. A team of IAF pilots and engineers have trained in France and the jets are being flown to Ambala in Haryana by the Indian pilots from Istres commune in southern France.

Located adjacent to the Chandigarh-Delhi Highway in the state of Haryana, Ambala also houses two squadrons of the Anglo-French origin Jaguar deep penetration strike aircraft along with ancillary units and allied establishments.The Rafales to be based at Ambala would be inducted into No. 17 Squadron, the Golden Arrows, which earlier flew the MiG-21s and was resurrected last year after having remained “number plated” since 2011. Of the two Rafale squadrons being formed, the other would be based at Hasimara in the east.

"Ambala's tryst with military aviation dates back to 1919 when ‘Camp Umballa’ was created and 99 Squadron of the Royal Air Force (RAF), equipped with Bristol fighters, was located there. Ambala's next ‘avatar’ was as headquarters of the RAF India Command in 1922," reads a plaque at the air force station. It saw several changes in its role before coming to its present designation of No. 7 Wing on August 1, 1954. In the early days, aircraft such as De Havilland 9A and Bristol F2B flew out of Ambala. As air operations in India began increasing, more officers were transferred to Ambala and it was made a permanent air force base on June 18, 1938. The then Advanced Flying Training School was also based there. It was from this airbase that Spitfires and Harvards flown by Instructors took part in the fighting in the Srinagar Valley in the 1947-48 Kashmir Operations.

In the pre-independence era, Ambala has also been the home of No. 1 Squadron, the first Indian Air Force unit that had been initially raised at Karachi. After operations against tribesmen in the North Western Frontier Province, the squadron moved to Ambala in the mid-’30s. March 1939 saw one of the most significant events in the IAF when then Flight Lieutenant (later Air Marshal) Subroto Mukerjee took over the squadron from Squadron Leader CH Smith at Ambala, becoming the first Indian officer to command a squadron. Subroto was promoted as Squadron Leader in August. He had earlier become the first Indian officer to become a flight commander. By then all three flight commanders in the squadron were Indians.

In the early years after Independence, the Indian government could access the eastern frontiers only through air and it was during this time that Ambala airbase played an important role in controlling the tribal disturbances in the North East. It was then also made the centre for aerial photographic survey, a new advancement in this field which proved to be of great value later.