20 Bodies Recovered From Landslide Site In Kerala; Search On To Locate Missing Persons 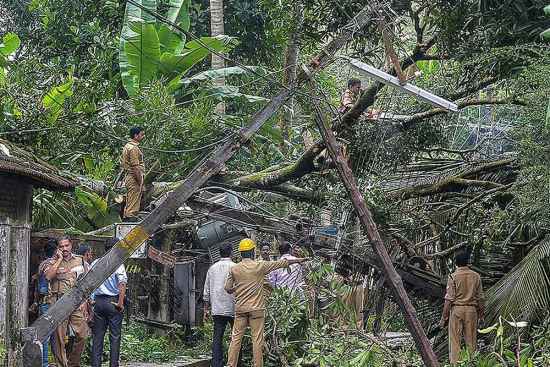 At least 20 bodies have been recovered so far from the debris of the landslides that flattened a row of 20 houses of tea estate workers in the high range Idukki district in Kerala, as efforts were underway amid continuing rains to locate those missing.

"On Friday night we had recovered two bodies. Today we retrievedtwo more. With this the toll has gone up to 20.

There was some confusion regarding the total number of persons at the location at that particular point of time. It seems like some people were not present and some had come visiting," Idukki District Collector H Dinesh told PTI.

As per the records available with the district administration, 46 people are still missing.

He added that 12 people were rescuedon Friday and are receiving treatment.

"Two teams of NDRF, besides the police and fire force officials are conducting search operations. They are working despite the bad weather that has affected the communication services and the electricity in the region..," Devikulam Sub- collector Prem Krishnan
told the media.

The picturesque landscape of Pettimudi was flattened into a rough patch of boulders and mud with parts of asbestos andtin sheets seen scattered around.

The incident is said to have occurred in the wee hours of Friday when a huge mound of earth fell on the "row houses" and two children and five women were among the deceased, most of whom were plantation workers from neighbouring Tamil Nadu.

In the four-month-long Southwest monsoon season, which began in June first week, Kerala has reported a total of 51 deaths till Thursday night due to various incidents of drowning, landslides, and tree fall.

Meanwhile, the weatherman on Saturday issued a red alert for four districts in the state, namely the disaster-hit Idukki, Wayanad, Thrissur and Palakkad district.

According to the State Disaster Management Authority, Kerala received an average rainfall of 95 mm in the last 24 hours while Vadakara in Kozhikoderecorded 32.7 cms of rain, the heaviest in the state.

Vaythiri in Wayanad received 19.3 cms of rain while Peerumedu in Idukki district 18.5 cms.

The alert is also issued on August 9 to Malappuram, Kozhikode, Wayanad, Kannur, Kasaragod and Idukki.

Yellow alert was issued to other districts on Saturday and Sunday.