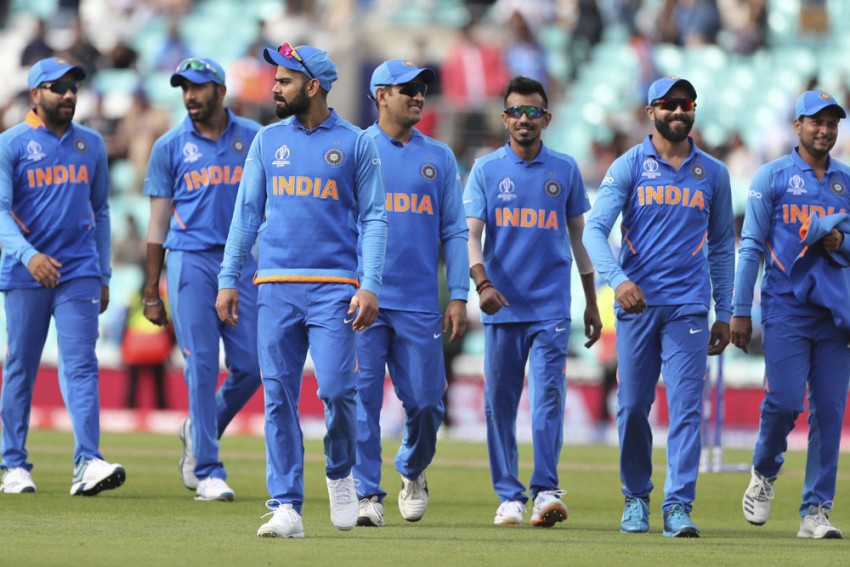 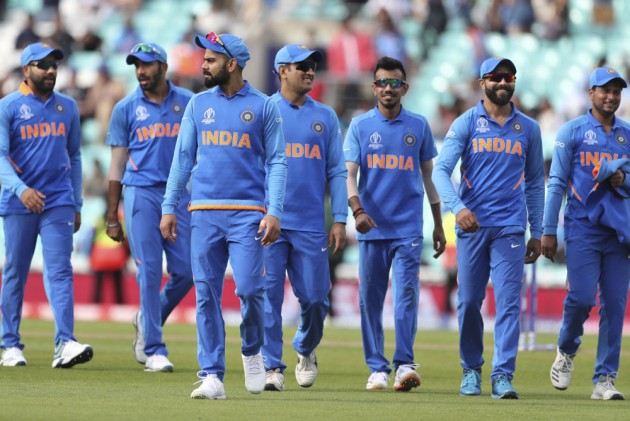 That's it.  India lost the match by six wickets inside 38th over.

So many talking points from the match. First, the playing condition. If the ball moves, India struggle. That age-old talk. Then, who bats at number four? And what about India's bowling combination.

Visualise cloud and a bit of grass sprinkling! By the way, here's what the captains said:

Virat Kohli: The wicket didn't have enough in the second innings. In a tournament like the World Cup, the lower order has to score at times if the top-order gets out quickly. Hardik Pandya batted well, MS Dhoni absorbed the pressure well and Ravindra Jadeja played well. The fielders are going to have a crucial role.

Kane Williamson: The new ball had a lot of seam movement and a little bit of swing. We didn't get much from spin but we have another warm-up game. Henry Nicholls is very versatile. We are trying to be flexible as we know Colin Munro can be destructive.

9:12 PM IST: With one needed, Ross Taylor picks out Virat Kohli at cover. He made 71 off 75. Wicket to Ravindra Jadeja. That happened off the fourth ball of the 37th over. Then, Henry Nicholls takes a single off the first ball of the next over to give New Zealand a comfortable six-wicket win over favourites India.

9:06 PM IST: A rare sight as MS Dhoni does the fielding to stop a ball at deep point. Six runs from Kuldeep Yadav's eight over and New Zealand need three runs from 84 balls. New Zealand - 177/3 after 36 overs.

9:01 PM IST: One run from Kuldeep Yadav's seventh over, but New Zealand are inching closer to the target. 14 needed from 16 overs.

8:46 PM IST: Finally, a wicket for India. Yuzvendra Chahal has Kane Williamson caught by Rohit Sharma at short third man. Easy for the Indian vice-captain, but the Kiwi skipper has done his job. With that, an 11-run stand in 20.1 overs came to an end. 67 runs from 87 balls for Williamson. FoW- 151/3 (29.5 overs). Henry Nicholls is the new man and Kiwis need 29 runs from 120 balls. Tough?

8:22 PM IST: Kane Williamson playing a captain's knock. After a sluggish start to his innings, the Kiwi skipper outscores his partner Ross Taylor and brings up fifty in 69 balls. His stand with Taylor is now worth 80 in 80. Taylor is on 40 off 38. New Zealand-117/2 after 23 overs. They need 63 runs from 27 overs. India are out of means.

8:09 PM IST: Kane Williamson and Ross Taylor add 50 runs in 56 balls as New Zealand tighten the screws on India. Both are on 30 runs each, but they are playing two contrasting knocks. New Zealand - 87/2 after 19 overs. They need 93 runs from 31 overs.

7:46 PM IST: Kane Williamson and Ross Taylor add 25 runs from 26 balls for the third wicket as New Zealand steadily take control of the chase. 12 runs from the Hardik Pandya's third over. New Zealand -62/2 after 14 overs. They need 118 runs.

There were a couple of half-chances for India in the previous overs, including a dropped catch and wasted run out chance.

7:22 PM IST: Bowling change for India. Virat Kohli introduces Mohammed Shami in the ninth over. Four off the second ball, hit by Kane Williamson to deep square leg. Five runs from the over. New Zealand - 34/1. They need 146 runs from 41 overs.

7:13 PM IST: Jasprit Bumrah is brilliant, but Bhuvneshwar Kumar is getting the stick from Martin Guptill. Bhuvi has conceded 27 runs from his four overs. In contrast, Bumrah's figures: 3-1-2-1. New Zealand - 29/1 after seven runs.

MS Dhoni is not keeping the wickets today. Dinesh Karthik gets the opportunity.

6:06 PM IST: Defiant Ravindra Jadeja keeps India's fight alive. Fifty with double off, in 47 balls. Then departs soon after. Caught at point by Martin Guptill off the bowling of Lockie Ferguson. He made 54 off 50. FoW-177/9 (38.1 over). Mohammed Shami is the new man.

5:29 PM IST: Big over for India. Ravindra Jadeja hits Mitchell Santner for two fours and a six off successive deliveries. 15 runs from the over. Jadeja is unbeaten on 31 off 31. India-130/8 after 30 overs.

5:15 PM IST: India are now in Test mode. Wearing down new Zealand bowlers. How successful they will be is another matter, though.  India - 110/7 after 28 overs.

5:00 PM IST: India reach 100 with a four off the blade of Ravindra Jadeja, through cover. James Neesham strayed and paid the price. That happened off the second ball of the 24th over. India are 101/7.

4:39 PM IST: Hardik Pandya departs after playing a promising knock of 30 from 37. New man James Neesham had him caught behind with a beauty. FoW-77/5 (19.1 over). Dinesh Karthik is the new man for India. And he didn't last long. Caught at deep fine leg by Ish Sodhi. FoW-81/6 (19.4 over). Ravindra Jadeja joins MS Dhoni in the centre.

4:32 PM IST: Elsewhere, Australia are 100/2 after 20 overs against England in their warm-up match. Live Scorecard is HERE.

4:13 PM IST: Rebuilding on for India. Hardik Pandya and MS Dhoni in a 14-run partnership for the fifth wicket. Colin de Grandhomme is brilliant. The Kiwi all-rounder's figures so far: 1/6 from three overs. India - 53/4 after 15 overs.

3:50 PM IST: Here's update on Vijay Shankar. According to the BCCI, the all-rounder went for scans last evening, and no fracture detected.

3:33 PM IST: Another one for Trent Boult. KL Rahul hits the first ball of the sixth over, then the unthinkable. Plays on. He made six from 10 balls. Fow-24/3 (5.3 over). Hardik Pandya is the new man. He's got a promotion, to number five, ahead of MS Dhoni.

3:23 PM IST: Trent Boult gets his second, in two overs. He had Shikhar Dhawan caught behind. No response from the umpire, forcing the Kiwis to take the review. FoW: 10/2 (3.1 over). Dhawan made two from seven. KL Rahul is the new man. India - 17/2 after three overs.

3:13 PM IST: Trent Boult gets the better of Rohit Sharma, traps in front with umpire Kumar Dharmasena taking some time to come to the verdict. Reviewed and wasted. Umpire's call. Virat Kohli is the new man. FoW-3/1 (1.2 over). INDIA-4/1 after two overs.

2:38 PM IST: India are playing 13. Vijay Shankar and Kedar Jadhav are not playing.

Warming-up? There are no warm-ups when the professionals meet, in every field. But as a ritual, two-time champions India will play two such practice matches before their World Cup opener against South Africa on June 5. First against New Zealand, then against Bangladesh on Tuesday (May 28).

Indian players, turning up for different franchises, have had arduous outings in the Indian Premier League, and they just got to mingle as a team on the field on the eve of the first warm-up. There shouldn't be any gelling issue, though.

ALSO READ: Here's How You Can Watch The Match?

Having said that, India are not without their concerns. During Friday's training session, a 'multi-dimensional' Vijay Shankar failed to fend off a Khaleel Ahmed delivery, and was hit in the forearm. He had to leave for medical care. Then, there's also uncertainty surrounding the availability of Kedar Jadhav, who picked up an injury during the IPL campaign.

India are also fretting over the number four batting position. Don't be surprised if either MS Dhoni or KL Rahul bat in that position today.

ALSO WATCH: Kohli explains why he 'picked' Warne and Faf for India

So, Virat Kohli and the team think tank will hope to utilise the warm-up game for tuning up ahead of the tournament proper, where they are billed as one the favourites.

Kiwis have their own worries. Wicket-keeper Tom Latham is all set to miss their warm-ups after picking up an injury to his finger during a match against an Australia XI.

Despite these issues, both the sides are expected to turn up with their respective best XIs. The fight will be between the well-rounded pace attacks, and top class batsmen. The two captains, Virat Kohli and Kane Williamson, are a joy to watch when in full flow. Then there brilliant batsmen like Rohit Sharma, Shikhar Dhawan, Martin Guptill, Colin Munro, Ross Taylor and not to forget one an only MS Dhoni.

Up against them are the likes of Jasprit Bumrah, the best in the business at present, Trent Boult, Mohammed Shami, Tim Southee, etc. These are some of the most lethal bowlers.

All of them may not play, but still, it will be an engrossing encounter.

By the way, New Zealand lost the ODI series to India at home.

It will be more than a warming-up. And according to the ICC, match tickets have already been sold out.

Only fans who have purchased tickets will be able to enter the match, no tickets are available on the day. pic.twitter.com/cFt2oUQooU