Gandhi had started his two-day tour of Madhya Pradesh on Monday after offering prayers at Ujjain's famous Mahakaleshwar temple. 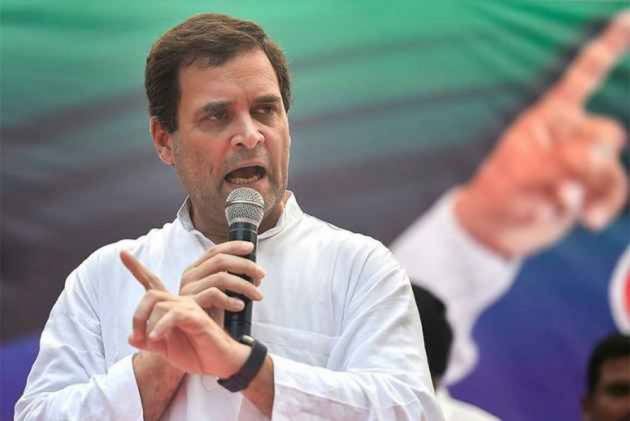 Congress President Rahul Gandhi on Tuesday said that he does not need the "certificate" of Bharatiya Janata Party (BJP) to visit temples.

Asserting that he understands the Hindu religion better than the saffron party , Gandhi said he is a "nationalist leader" who respects every religion.

"I am not a 'Hinduwadi' leader, but a nationalist leader. I am a leader of every religion, every caste, every language and every class," said Gandhi.

What Convinced Rahul Gandhi About The Need For Demonstrative Hinduism?

A day after the BJP's barb that Gandhi was "exhibiting fancy dress Hinduism" with his temple visits in the poll-bound Madhya Pradesh and in other states earlier, the Congress leader retorted, "Are the country's temples the sole property of the BJP and the RSS? Have only Modi and Shah got the contract to visit temples?"

Interacting with select journalists in Indore, Gandhi said the BJP remains silent whenever Prime Minister Narendra Modi or the BJP president Amit Shah visit a temple wearing clothes as per that temple's tradition.

"But when Kamal Nath, Jyotiraditya Scindia and I wear clothes as per the temple's tradition, it is said that we are exhibiting fancy dress Hinduism," he said.

Gandhi had started his two-day tour of Madhya Pradesh on Monday after offering prayers at Ujjain's famous Mahakaleshwar temple.

Hours after Gandhi's temple visit, BJP spokesman Sambit Patra had alleged, "... Rahul Gandhi is exhibiting fancy dress Hinduism continuously. To mislead the Hindus, he is sporting a "janeu" (sacred thread) over the shirt. We demand that 'janeudhari' Rahul Gandhi clarify to which 'gotra' (clan) does he belong to."

Talking to journalists, Gandhi said, "If I feel like going to a temple and offering prayers to God then I will definitely visit it. I don't need a certificate from the BJP. I understand Hindu religion better than the BJP does."

Replying to a question, he said he visits mosques, gurudwaras, churches and other places of worship as he respects every religion.

Describing Hinduism and Hindutva as two different concepts, he said, "Hinduism is a liberal and progressive concept that teaches love and respect for others, while there is hatred, insecurity and anger in the foundation of the BJP's idea of Hindutva."

"The BJP has ownership of Hindutva. But no one can claim sole ownership of Hinduism because it is a great concept. No one group can have a monopoly over it... We are a party which believes not in Hindutva, but in Hinduism," he said.

"When I visited temples during the Gujarat elections, the BJP went mad thinking how did I go there, although I had been to temples earlier. I had also visited Ayodhya," he said.

On a question regarding efforts to bring the issue of Ram temple into focus ahead of the upcoming polls, he said, "The Modi government has failed to fulfil the promises of ending corruption, bringing good days, providing jobs to youths and right prices to the farmers for their produce."