Several vehicles, inclduing OVs, of media organisations were also attacked. The injured video-journalist was being rushed to a hospital. 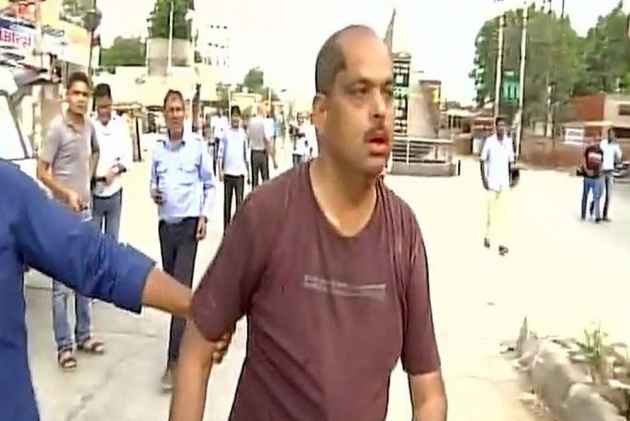 Moments after a CBI court convicted Gurmeet Ram Rahim Singh in a rape case on Friday, a video-journalist of a TV channel was injured when his crew was attacked by the followers of the Dera Sacha Sauda sect chief,.

Several vehicles, inclduing OBs, of media organisations were also attacked. The injured video-journalist was being rushed to a hospital.

Security was beefed up with a heavy deployment of police and paramilitary personnel around the Dera Sacha Sauda headquarters here as a special CBI court in Panchkula found the head of the sect guilty in a rape case.

Barricades were put up at a distance of 3 kms from the Dera headquarters and the security personnel were equipped with tear gas shells and water cannons.

The mounted police was also pressed into service.

Hundreds of Haryana police and paramilitary personnel, drawn from the CRPF and the BSF, were kept on a maximum alert in anticipation of protests by the Dera chief's followers.

Senior police officials said the security had been tightened further after the verdict and the overall situation was under control.

"We have deployed an adequate number of security personnel to tackle any eventuality. The situation has been under control so far," said A S Dhillon, Inspector General of Police, Hisar range.

The Army was called out in Sirsa today with senior police officials carrying out a flag march outside the sect headquarters.

"Two companies of the Army from Hisar district have been called out to maintain law-and-order in Sirsa," a top police officer said.

Scores of jawans, including 15,000 paramilitary personnel, have been deployed in the sensitive areas across Punjab and Haryana.