One migrant worker said once they reach their homes they would tell people in their hometown to 'not waste their votes on scheming politicians and unscrupulous political parties'. 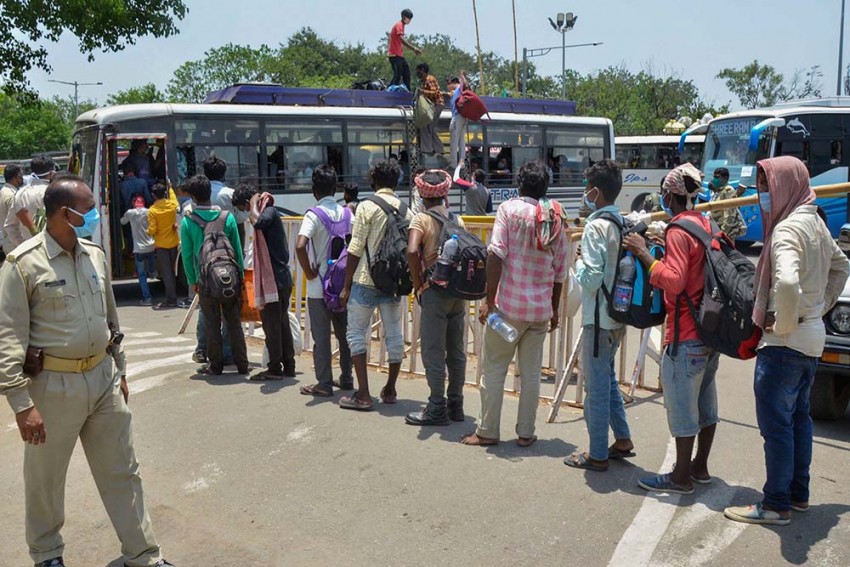 Stranded migrants queue up to board a bus for their hometowns after arriving from Tamil Nadu by a special train, amid ongoing COVID-19 lockdown in Ranchi.
PTI Photo
PTI 2020-05-24T18:08:30+05:30 'Govt Can't Handle Own Population, But Wants More People Under CAA': Migrants To Vote NOTA Next 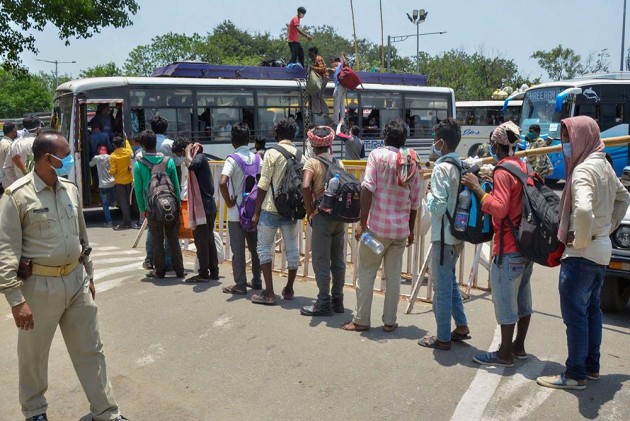 Nineteen-year-old Roshan Shrivastav was looking forward to finally being able to vote since he turned adult a year ago, till enduring pain and suffering as a migrant during the lockdown shook his faith in the system.

A native of Siwan district in Bihar, Roshan arrived in Delhi soon after Holi this year to find a job and support his family. He is now desperate to return home, an endeavour that has turned out to be his biggest struggle in the city.

On Friday evening, Roshan along with his nephew Shivam Shrivastav (19) and friend Prince Gupta (21) were turned back by police when they attempted to cross the Delhi-UP border near Ghazipur in the hope of somehow reaching their homes in Bihar.

The trio, who lived in a rented single-room flat in west Delhi's Baljeet Nagar, said their landlord was "kind" to them and did not ask for rent.

"But politicians play games with us around election times with fake, hollow promises, sympathise with the poor and then forget us," an anguished Roshan told PTI.

"The way villagers and poor migrants are literally dying in the streets, some on railway tracks, some in road accidents, as if their life does not matter to anyone, it has shaken me," he said.

Feeling that people like him have been "abandoned by the government" in this time of crisis and having "lost faith in the system", Roshan said he has decided to either not cast his vote at all or choose the NOTA option in future elections.

"I have just become eligible to vote but I have vowed to not vote for any party or politician. Be it the coming Bihar polls, next general elections, or any other elections in future. We feel cheated," he said.

While agreeing with Roshan, Shivam said he would not exercise his franchise at all in any election.

Echoing similar feelings of hurt and discontentment, Prince said, "This coronavirus crisis has exposed the fault lines. I have decided to either not vote at all or choose NOTA from here on".

Roshan said once they reach their homes they would tell people in their hometown to "not waste their votes on scheming politicians and unscrupulous political parties".

It took Adesh Singh and his wife Manju, along with their three small children, three days to reach their hometown Shahjahanpur in UP after they left their accommodation in south Delhi.

"We work hard to earn our living, we don't beg, borrow or steal. We may be poor, but we are also citizens of this country with equal rights granted to us. But perhaps we are the lesser equals because we are not rich," said a teary-eyed Manju, her mouth covered with a dupatta, as the couple haggled with taxi drivers at the Delhi-UP border to take them home without charging an exorbitant fare.

"This government was talking about bringing people from foreign countries under the CAA, but it is clear they can't handle their own population and are still trying to get more people into our country from abroad," she said.

"Why should we vote for any of these parties? All of them are of the same ilk. We don't need sympathy, we need dignity," rued Adesh, who worked in a factory in Delhi. "The purpose of lockdown is understood, but poor people who have been left stranded with no jobs or money, should they just die of starvation?" he asked.

After an arduous journey, the family finally reached home on Saturday morning.

Bareilly native Mahendra Singh, stranded in Delhi since the lockdown began, said he has made several attempts to leave the city but in vain.

"We hoped that government of Delhi or UP or the central government, any of them would help us. But they all disappointed us. Now we don't have faith in any of them. We just believe in our two feet now ('ab bas apne pair par vishwas hai')," Singh said, willing to walk all the way to his home, almost 300 km away.

Lakhs of migrant workers stranded in Delhi and other big cities, far from their homes, have been attempting to reach their native places since the lockdown was imposed about two months ago. A large number of them have been walking on foot for scores of kilometres after they could find no mode of conveyance.

A migrant woman recently delivered a baby on the road while walking from Nashik, Maharashtra to Satna in MP, over 1,000 km apart. She rested for two hours after delivery and then walked another 150 km with her family, prompting the National Human Rights Commission to send notices to the Maharashtra and Madhya Pradesh governments.

Roshan and Shivam said they both write and sing songs in Hindi and their native tongue Bhojpuri.

"We have written a few lines on lockdown crisis too -- 'Hum mazdooran ke ghar bhejwa da sarkar, nahin to ketna log hiyan par ho jai bimar' (please send us home or else many would fall sick here). Maybe we will complete this song after we reach home, but first we need to complete our journey," Shivam said.