'Ghosts Of The Past Are Haunting Congress'

The BJP general secretary on Congress allegations of misuse of CBI and the coming assembly elections out of which he optimistically predicts victory for his party in Madhya Pradesh, Rajasthan, Chattisgarh and Delhi. 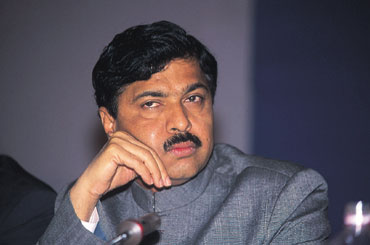 Full transcript of the BBC Hindi Special Programme, Aapki Baat BBC Ke Saath with BJP general secretary Pramod Mahajan on the topic:  Can the BJP defeat the Congress in the upcoming assembly elections?

Nagendar Sharma, BBC: Is the BJP in a position to defeat the Congress in the coming assembly polls?

Pramod Mahajan: Definitely, the BJP will defeat the Congress in Madhya Pradesh, Rajasthan, Chattisgarh and Delhi. In Mizoram, we are still a small party but we would definitely enter the assembly there.

BBC listener from Mizoram : Your party is in power at the centre since five years and you are seeking votes in  Congress-ruled states. The voters would take account of the governments, centre and the state. But at the centre, you have given up Article 370, construction of Ram temple issue is silent after the court intervention, fight against terrorism has failed, and excuses are being found. What are the issues that you are seeking votes on?

Pramod Mahajan : First of all let me make it clear that the in the five states going to polls, it would be the issues concerning the states on which the elections will be fought. These issues which you have mentioned are important, but they would be the issues in the Lok Sabha elections and not in these assembly elections.

This is a test for Digvijay Singh, Ashok Gehlot, Ajit Jogi and Sheila Dikshit. This is not a test of Atal Behari Vajpayee. Therefore the issues raised by you are not the issues of these elections.

Let me make it clear at the same time, we are ready to abrogate Art 370 from the Indian Constitution tomorrow, but it requires two-third majority, which we do not have. Common Civil Code is the need of the hour, it is a necessity, but except us there is nobody in Parliament, who is prepared for it.

During the last five years, the progress made by India economically, socially and at the international level, would ensure the BJP victory in the next Lok Sabha elections .

Nagendar Sharma, BBC: How important are these assembly elections for the BJP, the final ones before next year’s Lok Sabha elections?

Pramod Mahajan : I cannot say for sure that these are the final assembly polls before the Lok Sabha elections, as some parties could hold assembly elections before time also, i.e. before the general elections in September .

BBC listener from Sambalpur (Orissa): Chattisgarh CM Ajit Jogi has been exuding confidence of sweeping the elections in the state, he batted wonderfully in the BBC programme last Sunday. Now the Chief Election Commissioner J M Lyngdoh has expressed his helplessness by saying that Gujarat officials were better in conducting the elections. The BJP has not been able to declare its leader, have you decided to hand over that state on a platter?

Pramod Mahajan : I think that despite being in the neighbourhood of Chattisgarh, you are not up-to-date with information. Ajit Jogi has never won an election in Chattisgarh, he was not even a member of the state assembly when he became the chief minister. He was parachuted to become the CM.

In our view, in the assembly of 90 seats, we have either won 80 seats at some time, and we were behind in about five-seven seats. The batting of Ajit Jogi that you are mentioning, having done that, he was declared leg before wicket (LBW), by the CEC J M Lyngdoh. If you look carefully, Jogi’s boat is rocking in Chattisgarh, and finally he would find it difficult to pull it through even for his own seat.

BBC listener from Osaka (Japan): Coincidentally, today there are elections taking place in Japan also, where votes are sought on development. But in India, the Congress chief ministers have been alleging that the centre has discriminated against the non-BJP governments. This was in a way given credence by the Prime Minister himself, who recently in Bhopal said that states were lacking in development. What sort of politics is BJP playing, by discriminating against non-BJP states and allowing riots in the states ruled by it to win elections?

The Congress ruled states have not been able to either tap or utilise their resources and have therefore lacked in development. They are looking for excuses. So far as central assistance is concerned, I think that during the last decade, clear guidelines have been made, especially by the Planning Commission and the Finance Commission. The states are given money in accordance with the rules allowed by such commissions. Therefore the question of giving more or less does not arise.

The Congress chief ministers have failed on this front. I think that for this reason only Atal ji felt instead of having such chief ministers who are constantly complaining, it is better for the public to have performing chief ministers. In the coming elections, the Congress would have to give account of five years of their rule. Having done nothing they are groping for excuses.

Nagendar Sharma, BBC: Mr Mahajan, you are saying that the centre is cooperating with the states, but the Congress ruled states have spoken of discrimination and victimisation, with Ajit Jogi alleging misuse of intelligence and investigative agencies?

Pramod Mahajan : I think that Ajit Jogi should not be talking in this way. He had made public a document, and had demanded a probe into it. It is strange that on one hand you demand an inquiry, and when the inquiry is ordered, you say that you do not have faith on CBI. When there is any incident, the Congress party wants a probe by the CBI; when it ordered, they say they do not have faith in the CBI -- such double standards cannot be allowed. BJP has never misused the CBI and would never do so also. It was the Congress that was doing it and now their ghosts of the past are haunting them.

Nagendar Sharma, BBC: Mr Mahajan, the MP chief minister Digvijay Singh has been saying the Centre has not given proper grants for the maintenance and construction of national highways in the state, and that is why the road network is in a bad shape in that state..

So far as the centre is concerned, after Sher Shah Suri in history, it is for the first time that a government has worked on the golden quadrilateral and the Prime Minister’s rural road scheme. We are trying to make roads to all villages -- highways of eight lanes. This is our report card, what about the MP state government? What do they have to show?

BBC listener from Delhi : There was a recommendation in the fifth pay commission that the sixth pay commission would be constituted by 1st Jan, 2003. Similarly there was a recommendation that as soon as the DA would cross fifty percent, it would be merged with the basic pay, but when the matter came up, the central government rejected it. How are you seeking votes in Delhi now from the government employees?

BBC listener from Jaipur : BJP had started the campaigning by proxy in the states which are going to polls by the way of rath yatras. But are you seeking votes on the Hindutva plank or the performance of the centre, which I feel has been dismal?

Pramod Mahajan : So far as the centre is concerned, the development has been unprecedented during the tenure of Vajpayee government. The foreign exchange reserve is 100 billion US dollars, for the first time we are returning the debts of IMF and the World Bank. For the first time interlinking of rivers and highways is going on. Earlier two lakh people had mobiles, now two crores of them have it.

But as I have said earlier, this election is not being fought on the performance of the centre, it is being fought on the state issues. I do not wish to make the drought in Rajasthan an election issue, but what has happened during the past five years - it has been the disaster of the state and not development. BJP wants to bring Rajasthan out of the BIMARU category .

BBC listener from USA : Why is it that no BJP state government has been re-elected except in Gujarat, and why does the Ram temple issue come up during all elections ?

Pramod Mahajan : It is not only the BJP. If you look at the electoral history of India during the past two decades, barring one or two exceptions, the anti-incumbency factors has been so strong that no government has been re-elected. We have been trying and as you have mentioned Gujarat, I would like to tell you that in the recent past, BJP was re-elected in Goa. We hope to do better in the coming polls.

Nagendar Sharma, BBC: Mr Mahajan, since the BJP-led government was formed at the centre, except Goa and Gujarat, the BJP has lost in all the states, either ruled by it or by its allies. Why?

Pramod Mahajan : If my memory serves me right, after the 1999 Lok Sabha elections, it has been mostly the states ruled by the BJP allies where our alliance has lost. It was only in Himachal, where we had a pure BJP government.

Nagendar Sharma, BBC: And UP ?

Pramod Mahajan : Well in UP, after the last elections also, the situation was of a hung assembly as it was in Feb 2002. Now the result of such alliance governments. is known.

Nagendar Sharma, BBC: Means that such alliances do not work?

Pramod Mahajan : Only, an alliance such as the one at the centre, the NDA government, can work. At the state level, there are still problems with alliances.

Nagendar Sharma, BBC: But Mr Mahajan, BJP won in Gujarat after large scale riots and in Goa it was a victory in an alliance. Is it the communal agenda which wins?

Pramod Mahajan : No Goa was a clear BJP victory, and those talking of communalism, should bear in mind that in Goa the population of minorities - the Christians -  has been no less than 35-40 percent . This shows that BJP is not dependant on any caste or religion for victory.

Yes, Gujarat did see large-scale riots, but BJP victory has nothing to do with riots. BJP has been winning there since as far back as 1975. It would be wrong to link BJP victory with riots.

Nagendar Sharma, BBC: Mr Mahajan, since the BJP has become the ruling party at the centre, has it lost the party with a difference tag.

Pramod Mahajan : I do not agree, we continue to be a party with a difference. Whenever any part rules at the centre, some allegations are bound to be levelled by the opposition. But in the past five years or so, there has not been a single allegation against the Prime Minister or the Deputy Prime Minister.