Virender Sehwag appeared in Shoaib Akhtar's YouTube channel. The duo spoke about a variety of things, ranging from Cricket World Cup 2019, to the upcoming India Vs Pakistan clash in Manchester on June 2016. 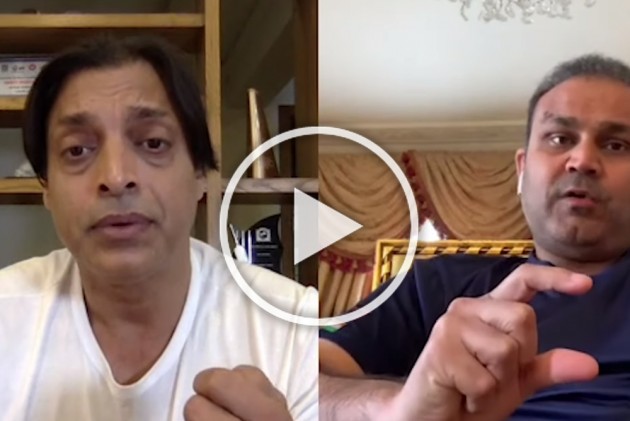 Who remembers Virender Sehwag's famous statement to Shoaib Akhtar, 'Beta beta hota hai. Baap baap hota hai'? Well, what looked like an eternal rivalry between the duo, has turned out to be the complete opposite to how it was perceived as by fans and media. The Nawab of Najafgarh appeared in Akhtar's YouTube channel, to discuss the ongoing Cricket World Cup, upcoming India Vs Pakistan clash and many other things.

In an enrichening conversation for cricket fans across the world, the two former cricketers expressed their opinion about June 16, when the Men in Blue face the Green Army.

On being asked about his prediction, Viru stated, "I don't think Pakistan will be able to beat India anyhow on 16th."

Sehwag also that opined that Pakistan failed in the 2011 World Cup, as the side didn't play aggressive cricket.

The duo agreed that branding the game as a final is wrong. Sehwag opined that ICC could exploit the fixture, and use it for financial gains.

About Pakistan's fearsome bowling attack, Sehwag feels that Pakistan's bowling attack has always been strong, so it wasn't much of a surprise to him this time too. But Sehwag believes that Hasan Ali's lack of wickets in the middle overs could be a cause of concern for Pakistan.

Akhtar also attributed Mohammad Amir's resurgence to his advice given to the bowler. The Don also said that he helped in the inclusion of Amir and Wahab Riaz in the squad.

Also, Sehwag stated that India are not favourites to lift the title. According to him, England and Australia have better chances. The former opener opined that Australia have the natural instincts to win high-pressure games, which England can do too.

Against Pakistan, Sehwag has played 31 ODI innings, scoring 1071 runs, coupled with two centuries, and a high score of 119. India have won all six of their previous ICC Men’s Cricket World Cup matches against Pakistan, five of those victories coming having defended a first innings total.

India face Pakistan on June 16 at Manchester's Old Trafford. Although, the weatherman has predicted a washout, but who knows, the Gods could be on cricket's side, and we could have an amazing fixture!