After welcoming Ganpati Bappa home on the auspicious festival of Ganesh Chaturthi, they are now preparing to bid farewell to Ganpati Bappa by immersing him in water. 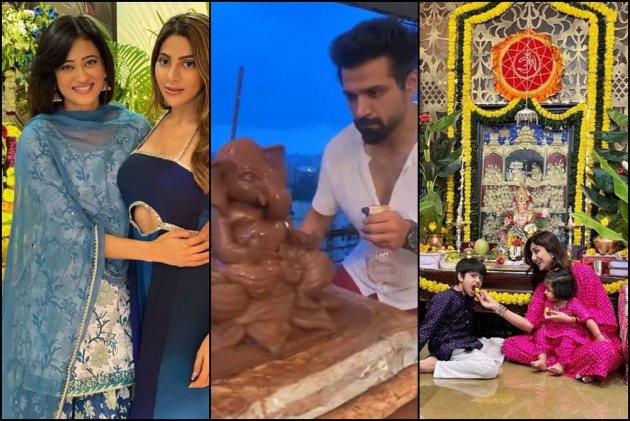 It’s that time of the year when the chants of ‘Ganpati Bappa Morya’ fill the air, and people dance their hearts out to welcome Lord Ganesha to their homes. Though people get to witness huge pandals during the ten-day festivals, the organisers have decided to tone down the celebrations to avoid crowding amid the pandemic.

Nonetheless, Bollywood and television celebrities are ringing in the festival with much zest and zeal. Like every year Sonu Sood, Salman Khan’s sister Arpita Khan, Shilpa Shetty, Kareena Kapoor, Arjun Bijlani, Rahul Vaidya, Rithvik Dhanjani, Neil Nitin Mukesh and Divyanka Tripathi brought the idols of Lord Ganesh to their homes. They shared pictures of the Ganpati celebrations on social media.

However, after welcoming Ganpati Bappa home on the auspicious festival of Ganesh Chaturthi, they are now preparing to bid farewell to Ganpati Bappa by immersing him in water.

Rahul Vaidya and Disha Parmar have been in the headlines as the most loved couple in the telly industry tied the knots recently. The couple made their relationship official during Rahul’s stint on Bigg Boss 14. The newlyweds celebrated their first Ganesh Chaturthi together and now the husband and wife bid farewell to Ganpati Bappa ahead of Ganesh Visarjan.

Arjun Bijlani decided to go green this year and welcomed an eco-friendly Ganesha. He took part in ganpati visarjan with wife Neha by his side.

Shweta Tiwari had Ganpati at her house for 5 days for the first time on daughter Palak’s insistence. She told a news daily, “We didn’t have work and Palak told me to keep Him for 5 days instead of one and half days. But soon after we decided, we had work on all 5 days. It is His blessings for us.”

Take a look at their energetic dance performance full of positive and energetic vibes.

Rithvik Dhanjani carved his own little Ganpati Bappa and he had an eco-friendly visarjan by dipping the idol in a bucket of water. He had shared several photos from the celebrations.

Ekta Kapoor performed Ganesh Visarjan with brother Tusshar Kapoor and father Jeetendra. The family bid goodbye to the Lord with the promise of him returning next year.

After a soulful Ganpati Puja celebration at home, actress Shilpa Shetty took part in the immersion festivities a few days ago. In the pictures, Shilpa can be seen twinning with her kids Viaan and Samisha in traditional outfits.