The margin of defeat may look big, but the chase will be remembered as one of India's best in recent times. After all, they were once 2/3 inside the first four overs. 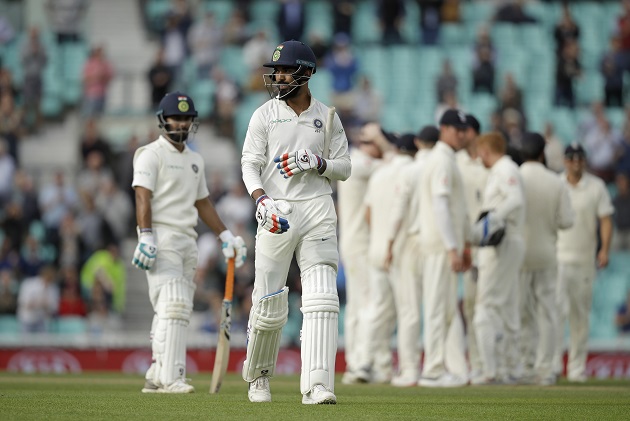 India came close to beating England while chasing a target of 438 at The Oval in 1979. But Srinivas Venkataraghavan's side settled for a draw when they were within nine runs of completing the highest successful run chase in the history of cricket.

At the same venue nearly four decades later, India again tried to do something similar but fell short by 118 runs. The margin of defeat may look big, but the chase will be remembered as one of India's best in recent times. After all, they were once 2/3 inside the first four overs, Shikhar Dhawan, Cheteshwar Pujara and skipper Virat Kohli – all gone.

Two youngsters Lokesh Rahul and Rishabh Pant made a target of 464 runs chaseable with brilliant counter-attacking batting until Adil Rashid got their wickets with some 25 overs still left in the match.

Indian tail survived some anxious moments, but once England availed the second new ball after the 90th over, it became just a formality. India were subsequently bowled out for 345.

Strangely enough, India had failed to chase 194 at Edgbaston, losing the series opener by 31 runs and 245 at the Rose Bowl, losing by 60 runs. Both the matches were within India's grasp but somehow conspired with themselves to give away.

England blew away India's remaining wickets, conceding 17 runs only, to win the fifth and final Test match of the series in London. And once again, it was prodigious Sam Curran who did the clean up by removing two wickets in two overs, before James Anderson returned to take that elusive 564th wicket.

Ravindra Jadeja who hit an unbeaten 86 in the first innings could manage only 13, while Ishant Sharma and Mohammed Shami scored 5 and 0. Sharma became Curran's first scalp, in the 92nd over. He then removed Jadeja in the 94th over. Both caught behind.

Anderson clean bowled Shami in the 95th over to complete the rite.

India's highest successful chase is still 403 against the West Indies at Port of Spain in 1976. Sunil Gavaskar (102) and Gundappa Viswanath (112) hit hundreds to help India post a match-winning 406/4 against a fearsome Windies bowling attack. But the highest successful run chase in the history is Windies' 418 against Australia at St John's in 2003.

India resumed on their overnight score of 58/3 with Rahul and Ajinkya Rahane on 46 and 10 respectively. With nothing to lose, the opener picked up where he left off yesterday, attacking England bowlers. But it was caution as usual for Rahane.

They added 118 runs for the fourth wicket, but two quick wickets – Rahane for 37 in the 36th over by Moeen Ali and debutant Hanuma Vihari for a duck in the next over by Ben Stokes – seemed to have closed the doors on India.

Rahane, who was at his elements, tried an ill-timed sweep against Ali and ended up offering a simple catch to Keaton Jennings at mid-wicket. Vihari faced only six balls and departed without scoring to a nasty bouncer from Stokes, caught behind. India were 121/5.

But Rahul found a worthy partner in Rishabh Pant, and the visitors once again sniffed an outside chance to pull off the impossible.

Rahul and Pant scored at a brisk pace, keeping the run rate at four for the most part of their stand to steadily chew away at the target. In the process, they have also scored their respective hundreds.

Post Lunch, Pant took over the charge, scoring at will with some sumptuous cricketing shots. The 20-year-old got to his best Test score of 26 with a couple in the 49th over off Adil Rashid, before bringing up maiden fifty in the 61st over with a single off Stokes just before Drinks.

When he reached 79 with a four in the 68th over off Stuart Broad, Pant moved past MS Dhoni (76 not out) as the Indian wicket-keeper with the highest fourth innings score. But he's not done yet.

As Rahul slowed down, he picked up the pace keeping the target in sight, for a possible last hurray. Then, he nonchalantly slogged hit the fifth ball of the 74th over, bowled by Rashid, over deep midwicket to bring up his maiden hundred.

Before him, only Indians to have adopted such wherewithal approach to reach the maiden hundred were Kapil Dev against the Windies at Delhi in 1979, Irfan Pathan against Pakistan at Bengaluru in 2007 and Harbhajan Singh vs New Zealand at Ahmedabad in 2010. By the way, Bhajji hit back-to-back hundreds in that series, with the second one coming at Hyderabad.

Rahul finally departed in the 81st over, bowled by Rashid off the first ball. He made 149 off 224 balls with 20 fours and one six. With that, a 204-run sixth-wicket stand was broken. It's India' second highest fourth innings stand, behind Gavaskar and Chetan Chauhan's 213 opening stand against England at the same venue, yes, in that drawn match.

Pant also didn't last long post-Tea. The left-handed batsman holed out at long-off off the last ball of 84th over with Ali taking the catch. Rashid thus accounted for both the India centurions. India were 328/7.

Earlier, skipper Kohli missed the opportunity to become only the second batsman to score 600 runs or more, after legendary Don Bradman (6) in a series by seven runs. He got out for a duck yesterday, leaving at 593.

On the other hand, the win serves as possibly the best farewell ever for an England player. Alastair Cook, who became the fifth player to score a hundred each in the first and last Test match, will cherish the feeling that his knocks helped the team he once led signed-off a close series with 4-1 win.

Cook, 33, retired with 12472 runs from 161 matches at an average of 45.35 with 33 centuries and 57 fifties. He is now the fifth highest scorer in Test cricket, and probably the greatest opening batsman ever.

Long-time team-mate James Anderson shared the limelight with his former captain. The pacer took the wickets to become the most successful pacer, replacing Aussie great Glenn McGrath. The 36-year-old has 564 wickets, only behind the spin trio of Muttiah Muralitharan, Shane Warne and Anil Kumble.